Jurden after serving as a judge 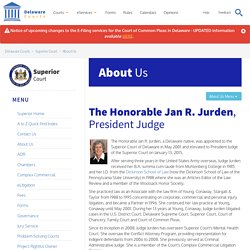 She practiced law as an Associate with the law firm of Young, Conaway, Stargatt & Taylor from 1988 to 1995 concentrating on corporate, commercial and personal injury litigation, and became a Partner in 1996. She continued her law practice at Young, Conaway until May 2001. Jan Jurden.