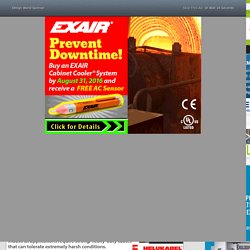 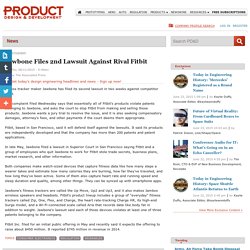 The complaint filed Wednesday says that essentially all of Fitbit's products violate patents belonging to Jawbone, and asks the court to stop Fitbit from making and selling those products. Jawbone wants a jury trial to resolve the issue, and it is also seeking compensatory damages, attorney's fees, and other payments if the court deems them appropriate. Fitbit, based in San Francisco, said it will defend itself against the lawsuits. It said its products are independently developed and that the company has more than 200 patents and patent applications. In late May, Jawbone filed a lawsuit in Superior Court in San Francisco saying Fitbit and a group of employees who quit Jawbone to work for Fitbit stole trade secrets, business plans, market research, and other information. Jawbone's fitness trackers are called the Up Move, Up2 and Up3, and it also makes Jambox wireless speakers and headsets. Everything this extreme Garmin fitness watch can do will stress you out.

LAS VEGAS — True fitness fanatics are probably familiar with Garmin's line of sports watches and fitness trackers, but non-extremists need not apply for this new wearable. 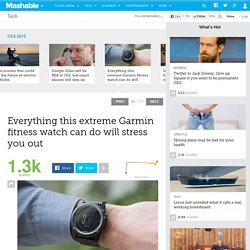 The company announced on Monday two new fitness watches at the 2015 International CES in Las Vegas. First, there's the fenix 3, which users would want to take on a serious climb; just hearing about everything it can do will likely stress out non-extremists. Second, there's the vivoactive smartwatch, which brings smart notifications (e.g. email, phone and text-message alerts) to the display — a concept that's become increasingly popular in the fitness-wearables space. Image: Mashable, Christina Ascani Let's start with the watch that's giving us anxiety as we assess its specs. 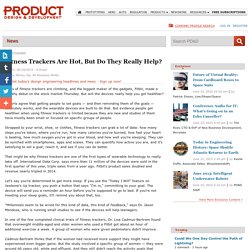 But will the devices really help you get healthier? Experts agree that getting people to set goals — and then reminding them of the goals — absolutely works, and the wearable devices are built to do that. But evidence people get healthier when using fitness trackers is limited because they are new and studies of them have mostly been small or focused on specific groups of people. Gift Guide: Get Better at Sports with Smart Gear. Advances in technology present sports enthusiasts with plenty of options to train better and smarter. 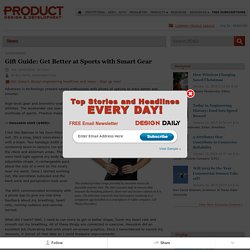 High-level gear and biometric-analysis software are no longer limited to elite professional athletes. The weekender can now use some tech-savvy approaches to get better, perhaps, at a multitude of sports. Practice makes perfect, but technology can make practice better: This undated product image provided by Hexoskin shows the Hexoskin exercise shirt. The shirt contains built-in sensors that measure the breathing patterns, heart rate and motion cadence as it is worn. I felt like Batman in his form-fitting bat suit. The shirt communicated wirelessly with a phone app to give me real-time feedback about my breathing, heart rate, running cadence and calories burned. Make fitness a habit. What is UP? 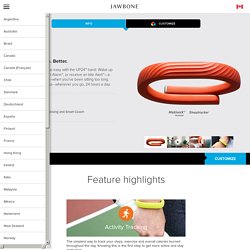 What does it do? Band + App + You = The Up System The UP® system takes a holistic approach to a healthy lifestyle. The UP24™ band tracks your movement and sleep in the background. Why You Need a Foam Roller - 10 Ways to Use a Foam Roller. Foam rollers are an inexpensive, super-versatile piece of equipment that can help you with everything from working out the knots in your muscles to sculpting an incredible set of abs faster (more about that later). In other words, if you aren’t already using one, you're missing out on some serious benefits! Check out these 10 easy ways to start working a foam roller into your routine. And if you can't find one at your gym (or simply want your own at home), check out Amazon.com’s broad selection of foam rollers to find the best one to suit your needs. Using a foam roller is essentially a more affordable way to give yourself a deep tissue massage. By slowing rolling over various areas of your body, you'll help break up adhesions and scar tissue and speed up the healing and recovery process after your workout.

Use it to loosen up common areas of tightness such as your outer thigh (iliotibial band, ITB), quadriceps, or upper back.