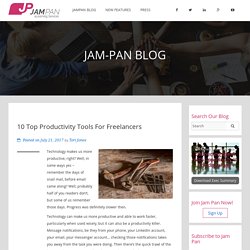 Well, in some ways yes – remember the days of snail mail, before email came along? Well, probably half of you readers don’t, but some of us remember those days. Progress was definitely slower then. Technology can make us more productive and able to work faster, particularly when used wisely, but it can also be a productivity killer. Message notifications, be they from your phone, your LinkedIn account, your email, your messenger account… checking those notifications takes you away from the task you were doing. And these aren’t the only productivity killers. But, just as technology can cause these problems, so it can also help address them. 1 StayFocusd This is a Google Chrome extension that enables you to block certain sites from your browser, thereby removing temptation from view. 2 Slack This is a highly popular communication and collaboration tool being used by a lot of organisations. 3 Toptracker 4 Active Collab. 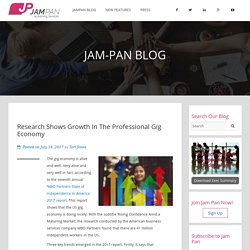 Very alive and very well in fact, according to the seventh annual ‘MBO Partners State of Independence in America 2017’ report. This report shows that the US gig economy is doing nicely. With the subtitle ‘Rising Confidence Amid a Maturing Market’, the research conducted by the American business services company MBO Partners found that there are 41 million independent workers in the US. Three key trends emerged in the 2017 report. Gig Economy Round Up: The Three Trends In Independent Work. This week we share new research on independent work that shows the three ways in which gig work is developing, a look at what the gig economy is and what it means and a novel example of a gig platform disrupting traditional business. 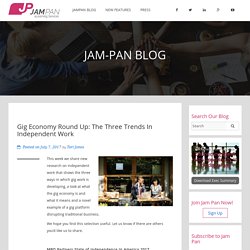 We hope you find this selection useful. Let us know if there are others you’d like us to share. MBO Partners State of Independence In America 2017 This introduction to MBO’s latest research into the state of independent work draws out some useful trends in how the independent workforce is growing. How To Find Right Time & place To Go Freelance? “The two most important requirements for major success are: first, being in the right place at the right time, and second, doing something about it.” 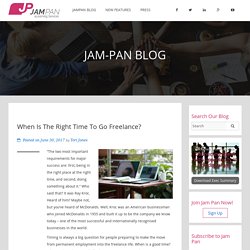 Who said that? It was Ray Kroc. What Is The Future Of Gig Economy? It’s interesting to see the Confederation of British Industry urging policymakers to have a more constructive view on gig working. 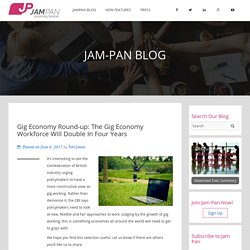 Rather than demonise it, the CBI says policymakers need to look at new, flexible and fair approaches to work. Judging by the growth of gig working, this is something economies all around the world will need to get to grips with. We hope you find this selection useful. The Key Factor to Get Great Work from Freelancers.

Would you pay for someone to do a job without knowing what you’ll end up with? 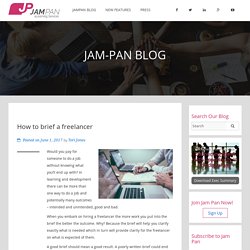 In learning and development there can be more than one way to do a job and potentially many outcomes – intended and unintended, good and bad. When you embark on hiring a freelancer the more work you put into the brief the better the outcome. Why? Because the brief will help you clarify exactly what is needed which in turn will provide clarity for the freelancer on what is expected of them. A good brief should mean a good result. How L&D Teams Can Get Job Done With Freelancers. When Jam Pan launched more than two years ago, organisations predominantly used us to support projects – bringing in freelance support for the duration of the work. 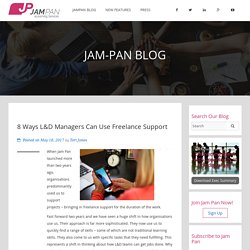 Fast forward two years and we have seen a huge shift in how organisations use us. Their approach is far more sophisticated. They now use us to quickly find a range of skills – some of which are not traditional learning skills. They also come to us with specific tasks that they need fulfilling. This represents a shift in thinking about how L&D teams can get jobs done. If you are an L&D or HR manager considering using freelance support then consider the following types of tasks you could give to an expert freelancer. 1 User testing. An Opportunity for Elearning Developers. Best Podcasts to Grow Productivity. The growth of the internet has not led to the decline of a very well established medium, radio. 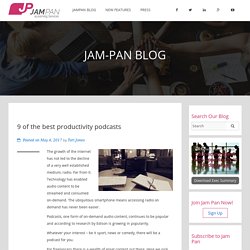 Far from it. Technology has enabled audio content to be streamed and consumed on-demand. The ubiquitous smartphone means accessing radio on demand has never been easier. Podcasts, one form of on-demand audio content, continues to be popular and according to research by Edison is growing in popularity. Whatever your interest – be it sport, news or comedy, there will be a podcast for you. The Future of eLearning - Gig Economy Model with AI. 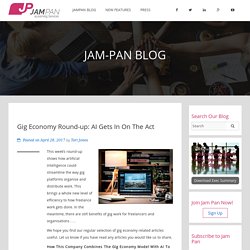 This brings a whole new level of efficiency to how freelance work gets done. In the meantime, there are still benefits of gig work for freelancers and organisations . . . Did You Know 63% of UK Employees Preferred for Freelancing? Working in the gig economy is now an attractive proposition for many European employees. 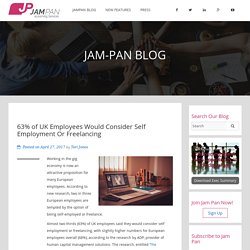 According to new research, two in three European employees are tempted by the option of being self-employed or freelance. Almost two thirds (63%) of UK employees said they would consider self employment or freelancing, with slightly higher numbers for European employees overall (68%), according to the research by ADP, provider of human capital management solutions. The research, entitled ‘The Workforce View in Europe 2017’, also found that just over a quarter (26%) are already actively planning to move their work in this direction.

What are the opportunities and challenges of gig working? There are 1.3 million gig economy workers in the UK, according to in-depth research into gig working by the Chartered Institute of Personnel and Development. The institute, which represents HR and learning and development professionals in the the UK, surveyed 400 gig economy workers and more than 2,000 other workers. It found that the most common reason for taking on gig work was to boost income (32%). Overall, gig economy workers are also about as likely to be satisfied with their work (46%) as other workers in more traditional employment are with their jobs (48%). The report also reveals that only a quarter (25%) of gig economy workers say it is their main job, suggesting most use it to boost their overall income rather than depend on it.

We hope you find this selection useful. Elucidat Academy Helps Freelancers to Win Works. Get paid more from your niche- Gig Economy’ Jobs. This week our links cover a range of different gig economy angles. In the UK, a soon to be published report will set out recommendations on employment rights for freelance workers. We also feature a boss of a creative agency who reminds us that some industry sectors are heavily reliant on freelance skills. PM Backs Plans To Overhaul Workers’ Rights To Reflect Gig Economy The UK government has asked Matthew Taylor, a former adviser to Tony Blair, to produce a report on the gig economy and workers’ employment rights. Freelance working and work-life integration.

Integrating work and life might make a lot more sense to freelancers than trying to balance work and life. In a recent article entitled, Want a Competitive Advantage? Focus on Work-Life Integration, Jacob Morgan suggests that rather than battling work and life to create a balance, we should be integrating them so they work together. He defines the difference between work-life balance and integration in the following way: “What’s the difference between work-life balance and work-life integration? Balance is the old way of thinking–creating barriers between work and home so they didn’t spill over into each other. This approach makes a lot of sense for all workers and especially freelancers. However, the minute something unexpected happens – an illness or emergency, for example – and all the routines are thrown into disarray.

That’s not Michelle’s approach, however. Gig economy round-up: Defining gig economy jobs and how to win work. UK Budget 2017: What it Offers for Freelancers. UPDATE: Since this piece was first published, Theresa May has put the brakes on the NICs changes coming into effect just yet. Widespread criticism of the move to increase National Insurance payments has meant that the tax rises will now not go before MPs until the autumn.

That’s according to Workplace 2025, a report based on a study of 3,100 workers and 1,500 HR and c-suite executives in the US by Randstad US. The research shows that 89% of employers agree that by 2025, companies that are adept at managing a mix of traditional and ‘agile’ talent will be most successful. Top tips for winning work on Jam Pan. Jam Pan enables freelancers to find work by matching their skills and experience with the jobs posted on the platform. But winning jobs is not a given. Hire a freelancer: they face far less obstacles to being productive – ELearning Freelancers & Agencies: Jam-Pan.

It will come as no surprise that activities that block productivity take up more time than those that enable it. Survey respondents were asked to give a best guess estimate for what percentage of the working week is taken up by the following tasks: Performing the primary duties of my job – 39% (down from 46% the previous year)Emails – 16%Useful and productive meetings – 11%Administrative tasks – 11%Wasteful meetings – 10%Interruptions for non-essential tasks – 8%Everything else – 5% As you can see from the list, 45% of the working week is taken up managing email, administrative tasks, wasteful meetings and interruptions for non-essential tasks.

LMS Implementation Strategy and Tools. E-Learning Bidding Services in UK by Jam-Pan. How Can You Review Your Posted Job on Jam Pan ? Choose The Best eLearning Agencies in UK. How to Meet The Changing Needs OF Corporate L&D Teams. How to expand the Trends, Applications and Concepts of eLearning. Get Opportunity Knocks for Freelance eLearning Professionals. How To Do Registration Of Your Profile At Jam-Pan. Leading Elearning Solutions. Opportunity Knocks for Freelance eLearning Professionals.