Design an Ambigram Logo With Your Name. Ambigrams are a particularly complex type of typographical art that can be read identically in different orientations.

They typically take the form of a word that reads the same way upside down as it does right side up. Today we’re going to see what’s involved in creating ambigrams and walk through creating a basic one on our own. What Is An Ambigram? In its most basic form, an ambigram can be a simple symbol that looks the same at two or more orientations. More complex forms involve words, groups of words or even entire sentences.

Ambigrams are one of those things that you can go your whole life without noticing and then realize that they’re everywhere once you learn to see them. If you rotate either of these logos 180 degrees, they look exactly the same. Here are a few logos I pulled from LogoPond that are Ambigrams. Pop Culture In this story, the “Illuminati” are a secret satanic cult with an ambigram logo that the author spends far too much time attempting to convince you is impressive. Ambigram. The meaning of the ambigram may either change, or remain the same, when viewed or interpreted from different perspectives. 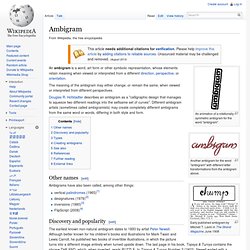 Douglas R. Hofstadter describes an ambigram as a "calligraphic design that manages to squeeze two different readings into the selfsame set of curves". Different ambigram artists (sometimes called ambigramists) may create completely different ambigrams from the same word or words, differing in both style and form. Other names[edit] Ambigrams have also been called, among other things: vertical palindromes (1965)[1]designatures (1979)[2]inversions (1980)[3]FlipScript (2008)[4] Discovery and popularity[edit] The earliest known non-natural ambigram dates to 1893 by artist Peter Newell. From June to September, 1908, the British monthly The Strand published a series of ambigrams by different people in its "Curiosities" column. 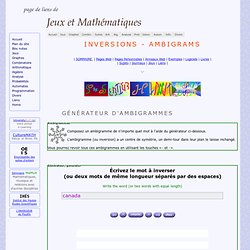 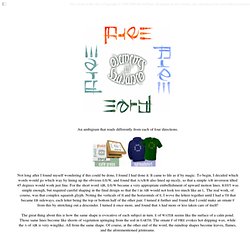 Not long after I found myself wondering if this could be done, I found I had done it. It came to life as if by magic. To begin, I decided which words would go which way by lining up the obvious E/E/W, and found that A/A/R/R also lined up nicely, so that a simple A/R inversion tilted 45 degrees would work just fine. For the short word AIR, E/E/W became a very appropriate embellishment of upward motion lines. 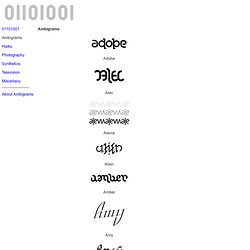 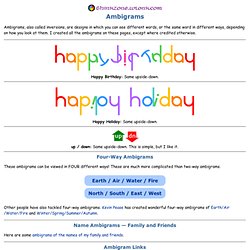