Updating R from R (on Windows) – using the {installr} package. Upgrading R on Windows is not easy. 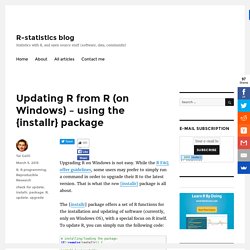 While the R FAQ offer guidelines, some users may prefer to simply run a command in order to upgrade their R to the latest version. That is what the new {installr} package is all about. The {installr} package offers a set of R functions for the installation and updating of software (currently, only on Windows OS), with a special focus on R itself. R - Reading in CSV Files. Updating R from R (on Windows) – using the {installr} package. R: R News. The print method for methods() gains a byclass argument. 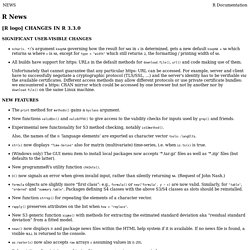 New functions validEnc() and validUTF8() to give access to the validity checks for inputs used by grep() and friends. Experimental new functionality for S3 method checking, notably isS3method(). Also, the names of the R ‘language elements’ are exported as character vector tools::langElts. Str(x) now displays "Time-Series" also for matrix (multivariate) time-series, i.e. when is.ts(x) is true. (Windows only) The GUI menu item to install local packages now accepts ‘*.tar.gz’ files as well as ‘*.zip’ files (but defaults to the latter). 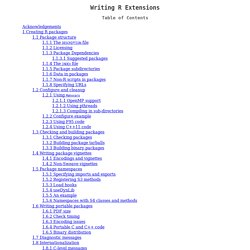 This manual is for R, version 3.3.0 (2016-05-03). Copyright © 1999–2016 R Core Team Permission is granted to make and distribute verbatim copies of this manual provided the copyright notice and this permission notice are preserved on all copies. R Data Import/Export. Table of Contents This is a guide to importing and exporting data to and from R. 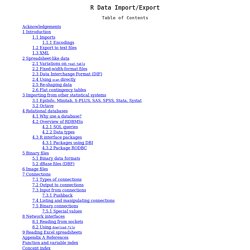 This manual is for R, version 3.3.0 (2016-05-03). Coursera. Art of Data… by Roger D. Peng et al. Data analysis is a difficult process largely because few people can describe exactly how to do it. 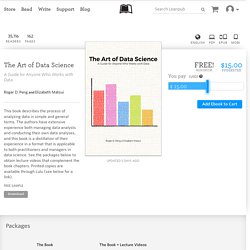 It's not that there aren't any people doing data analysis on a regular basis. It's that the process by which we state a question, explore data, conduct formal modeling, interpret results, and communicate findings, is a difficult process to generalize and abstract. Fundamentally, data analysis is an art. It is not yet something that we can easily automate. Exploratory Data Analysis… by Roger D. Peng. Report Writing for Data… by Roger D. Peng. This book teaches the concepts and tools behind reporting modern data analyses in a reproducible manner. 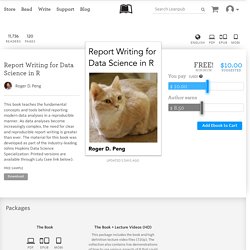 Reproducibility is the idea that data analyses should be published or made available with their data and software code so that others may verify the findings and build upon them. The need for reproducible report writing is increasing dramatically as data analyses become more complex, involving larger datasets and more sophisticated computations. Reproducibility allows for people to focus on the actual content of a data analysis, rather than on superficial details reported in a written summary. An Introduction to R. Table of Contents This is an introduction to R (“GNU S”), a language and environment for statistical computing and graphics. 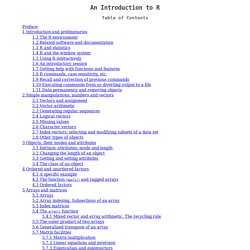 R is similar to the award-winning1 S system, which was developed at Bell Laboratories by John Chambers et al. It provides a wide variety of statistical and graphical techniques (linear and nonlinear modelling, statistical tests, time series analysis, classification, clustering, ...).