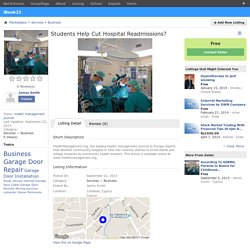 This article is available online at www.healthmanagement.org. Pollution, A Cause Of Cardiovascular Disease? New Weapon In Fight Against MRSA. New Weapon In Fight Against MRSA Virginia Tech researchers have demonstrated that a new group of antibiotics shows potential in fighting the bacteria Staphylococcus aureus (staph) and the antibiotic-resistant strains commonly known as MRSA. 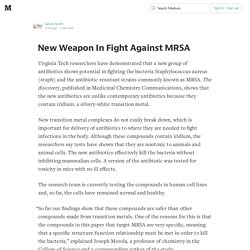 The discovery, published in Medicinal Chemistry Communications, shows that the new antibiotics are unlike contemporary antibiotics because they contain iridium, a silvery-white transition metal. New transition metal complexes do not easily break down, which is important for delivery of antibiotics to where they are needed to fight infections in the body. Although these compounds contain iridium, the researchers say tests have shown that they are nontoxic to animals and animal cells. What Is Health Management Journal !

Management Impacts Hospital Care Quality? on Behance. To evaluate the relationship between hospital management practices and the quality of care, Dr. 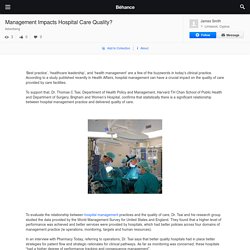 Tsai and his research group studied the data provided by the World Management Survey for United States and England. They found that a higher level of performance was achieved and better services were provided by hospitals, which had better policies across four domains of management practice (ie operations, monitoring, targets and human resources). In an interview with Pharmacy Today, referring to operations, Dr. Do Doctors Need Training In End-Of-Life Care? Dedicated to promoting management and best practice in healthcare, the health management journal, HealthManagement.org, has recently published on its website an article on end-of-life and palliative care. 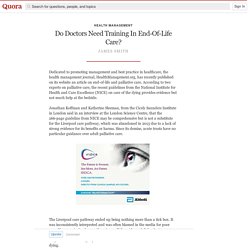 According to two experts on palliative care, the recent guidelines from the National Institute for Health and Care Excellence (NICE) on care of the dying provides evidence but not much help at the bedside. Jonathan Koffman and Katherine Sleeman, from the Cicely Saunders Institute in London said in an interview at the London Science Centre, that the 266-page guideline from NICE may be comprehensive but is not a substitute for the Liverpool care pathway, which was abandoned in 2013 due to a lack of strong evidence for its benefits or harms. Since its demise, acute trusts have no particular guidance over adult palliative care. We Live Longer? Yes. Healthier? No. Recent research in life sciences reports a global rise in life expectancy outweighed by low quality of life. 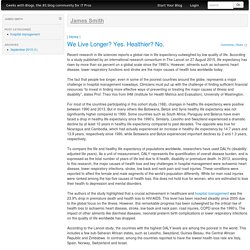 According to a study published by an international research consortium in The Lancet on 27 August 2015, life expectancy has risen by more than six percent on a global scale since the 1990’s. However, ailments such as ischaemic heart disease, lower respiratory functions and stroke are the major causes of health loss worldwide today. New Styles In Hospital Management. Antipsychotic Drug Treatment? Brain Scans Could Help Decide. A group of investigators from The Feinstein Institute for Medical Research report revolutionising findings in radiology management. 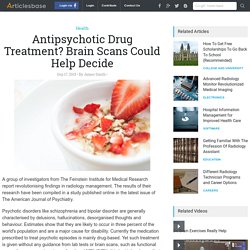 The results of their research have been compiled in a study published online in the latest issue of The American Journal of Psychiatry. Psychotic disorders like schizophrenia and bipolar disorder are generally characterised by delusions, hallucinations, desorganised thoughts and behaviour. Estimates show that they are likely to occur in three percent of the world's population and are a major cause for disability.

Currently the medication prescribed to treat psychotic episodes is mainly drug-based. Social Media And Healthmanagement. If you are one of the billions of people using social media, you know how swiftly an article in a health management journal can do the rounds and be misunderstood. 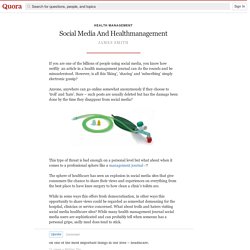 However, is all this ‘liking’, ‘sharing’ and ‘subscribing’ simply electronic gossip? Anyone, anywhere can go online somewhat anonymously if they choose to ‘troll’ and ‘hate’. How Can Helping Doctors Lead More Balanced Lives. Burnout is a common complaint amongst doctors who, according to previous research, work 10 to 20 hours more a week than other professionals. 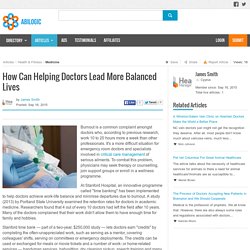 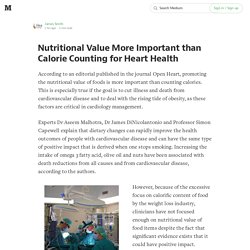 This is especially true if the goal is to cut illness and death from cardiovascular disease and to deal with the rising tide of obesity, as these factors are critical in cardiology management. Experts Dr Aseem Malhotra, Dr James DiNicolantonio and Professor Simon Capewell explain that dietary changes can rapidly improve the health outcomes of people with cardiovascular disease and can have the same type of positive impact that is derived when one stops smoking. Increasing the intake of omega 3 fatty acid, olive oil and nuts have been associated with death reductions from all causes and from cardiovascular disease, according to the authors. How Can Touch Deprivation in Hospitals. Lean Management System Applied in Hospital Management. Hospitals like Harbor-UCLA have adopted a new philosophy in hospital management. 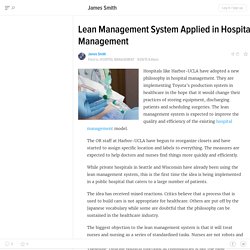 Sound Proof Panels to Reduce Hospital Noise. Patients often complain about hospital noise as the consistent sound of multiple monitors, paging systems, wheelchairs, gurneys and squeaking carts often makes a good night's sleep impossible. The University of Michigan Health System (UHMS) has decided to make its hospitals quieter. Tissue Velcro Could Repair Damaged Hearts. By healthmanagementmaster on September 8, 2015 Engineers at the University of Toronto in Canada have created a biocompatible scaffold that makes the assembling of functional heart tissue as easy as fastening shoes. The scaffold lets sheets of beating heart cells snap together just like Velcro. This is the first of its kind technique in cardiology management and can lead to the building of larger tissue structures before they are needed and can disassemble them just as easily.

Efforts to grow heart muscle cells in labs are not new in the field of cardiology management. However, the problem has not been that cells don’t resemble the natural ones but that lab-grown cells often lack support cells that shape them into long, lean beating machines. The UofT researchers used a special polymer called POMaC and created a 2D mesh for the cells to grow around. Music Reduces Anxiety Levels for Breast Biopsy Patients. Listening to live or recorded music during surgical breast biopsy can reduce anxiety levels for women as revealed by a recent research.

Health management talks about the new study that was conducted with 207 patients. The findings show that anxiety levels dropped significantly in patients who heard either their preferred songs live or recorded before surgery. Both live and recorded preoperative music therapy was able to reduce anxiety in the study patients and no significant differences were observed between the two types of music - live or recorded.

As explained in health management, a major reason for the positive impact of music on women undergoing breast biopsies may be the fact that music touches the brain and stimulates the natural opiates of the body. How Are You Responsible For Your Healthcare? According To SERMO, Parents to Blame for Childhood Obesity. A recent survey by SERMO reveals that 69 percent of doctors feel that parents are primarily responsible for the childhood obesity epidemic. The survey comprised of 2258 healthcare practitioners. The objective of the survey was to identify the forces driving the obesity epidemic and to identify measures that could be taken to reduce the incidence of obesity.

The World Health Organization considers childhood obesity as one of the biggest public health threats of the 21st century. Obesity is a major issue because it puts children at risk of diabetes, asthma and heart failure. A large number of obese children grow up to be obese adults and a large number of these obese adults end up suffering from cardiovascular disease. As one obstetrician/gynaecologist who participated in the survey points out, excessive childhood weight may be genetic but in most cases, the aetiology is environmental.

As reported in health management journal, obesity fuels silent heart damage. Source: Medcity News. HealthManagement.org Have Helping Doctors Lead More Balanced Lives. Introduction Although the Stanford's programme is geared towards doctors in emergency and critical care management units, similar time banking ideas can be implemented in physicians' offices. Knowing the Right Person is as Simple as Saying Your Name. We may look askance at name badges and tabards on shop staff, but uniforms and name badges can help patients feel at ease and relatives feel more confident about knowing who to approach about their family member’s hospital stay. It goes across all industries. If you don’t have at least a name badge with the company or hospital name, how do you know who to ask? I am sure many of us have had the experience of being approached in shops or on a train with questions about the service or stock, only to say, “Sorry, I don’t work here.”

Knowing who does what makes service more likely to run smoothly. Hospital management is not just about the finances, resourcing and clinical care. Health Management - Does Price Influence Patient Behaviour? Get The Best Digital Healthcare Technology. The Future of mHealth. Addressing Social Factors to Control Heart Disease. According to a statement from the American Heart Association published in the journal Circulation, deaths from heart attack, strokes and other heart diseases may be on the decline but other factors such as race, income, environment and education could easily revers this trend. University Hospital Receives National Award for Cardiac Care.

Study First To Forecast Flu In A Subtropical Climate. How to Find Easy Tips Health Management For You. Healthcare management : HealthManagement.