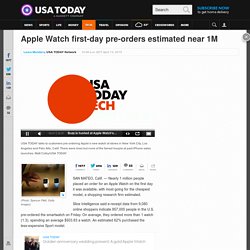 There were lines but none of the famed hoopla at past iPhone sales launches. Matt Colby/USA TODAY. As Apple Watch launches, smartwatch app makers explore new interfaces. The smartwatch presents a new set of challenges for app designers, many of whom have been exploring the potential of these new devices since the crowd-funded Pebble watch launched in 2013. 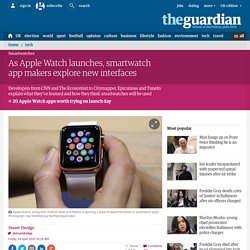 Android Wear smartwatches came on to the market in 2014, and the Apple Watch, you may have noticed, is on sale from 24 April. Many developers are launching their apps this week to coincide with the launch, often the culmination of at least two years exploratory design work. How have they used experiences of mobile app design to inform smartwatch apps? How are they differentiating watch apps from those on mobile without duplicating functionality? And how does a designer approach planning out an interface on an impossibly small screen?

It’s all about the ‘glances’ Lots of developers are talking about “glances” right now: the idea of smartwatch apps as things you glance at for a few seconds, with one or two simple interactions, before going back to whatever you were doing. Apple Watch Preview. Four years ago, I wore an iPod Nano on my wrist and I loved it. 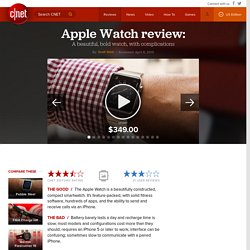 I liked the novelty of it, the way it played music on my wrist, and could go with me anywhere. At the time, I wished the strapped-on music player, with its watch faces and little assortment of apps, could do more. And I dreamed of a day it might connect to my phone. Apple Watch vs Samsung Gear: Why Apple Can Succeed Where Samsung Failed (AAPL, SSNLF) Apple (NASDAQ: AAPL) wasn't the first company to release an mp3 player, nor was it the first to release a smartphone, or even a tablet. 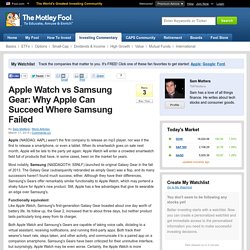 When its smartwatch goes on sale next month, Apple will be late to the party yet again: Apple Watch will enter a crowded smartwatch field full of products that have, in some cases, been on the market for years. Most notably, Samsung (NASDAQOTH: SSNLF) launched its original Galaxy Gear in the fall of 2013.

The Galaxy Gear (subsequently rebranded as simply Gear) was a flop, and its many successors haven't found much success, either. Samsung Controls Smartwatch Market in 2013, Thanks to Galaxy Gear. Smartwatches are viewed as a growing mobile trend, and there are several models which we can go out and buy this very minute. 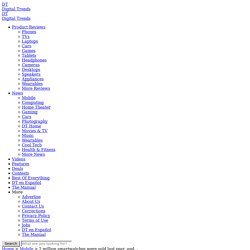 But how well did the early examples sell during 2013, the year when interest in smartwatches really began to rise? According to Strategy Analytics, just under two million smartwatches shipped globally last year, and watches running Android snapping up a 61 percent share of that figure. About 1.2 million Android watches were sold in 2013, with the remaining 700,000 falling into the “other” category.

And believe it or not, the most popular Android smartwatch was the Samsung Galaxy Gear. New Apple Watch vs. Galaxy S smartwatch. Apple Watch sold more in a day than Android Wear did in 2014. The first Apple Watch sales estimates are in, even though the iPhone-tailored smartwatch just became available to pre-orderers in time for today's release date. 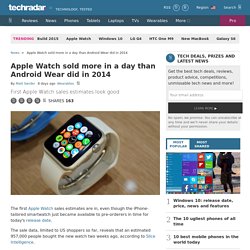 The sale data, limited to US shoppers so far, reveals that an estimated 957,000 people bought the new watch two weeks ago, according to Slice Intelligence. That contrasts with Android Wear watch sales that were reportedly stuck at 720,000 sold by the end of 2014. That's a global estimate with six months of availability for several watches. Current Apple Watch sales figures don't take into account eight other launch-day countries, including the UK and Australia. An average of 1.3 watches were sold per person in the US, according to the projections from a sample size of two million online shoppers. 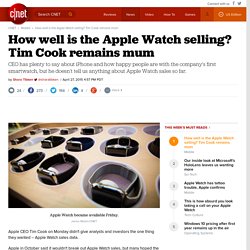 Apple in October said it wouldn't break out Apple Watch sales, but many hoped the company would give some details about first-weekend sales as it has tended to do for iPhones. The smartwatch, which hit the market Friday, ranges in price from $349 for the aluminum sport version to $17,000 for the 18-karat-gold model. The device requires an iPhone 5 or newer to run basic apps and receive notifications and comes in 38 different combinations. Preoders for the device started April 10, and for now, Apple's only accepting orders online. Cook tends to use phrases like "amazing," "staggering" and unprecedented" when describing new product launches.

"Right now demand is greater than supply so we are working hard to remedy that," Cook said during the earnings call. "I'm thrilled with it," Cook said. It's likely tough for Apple to detail just how many devices it has sold so far. Apple Watch price, where to buy, release date and specs- The Inquirer. THE APPLE WATCH has finally arrived, but it has come with more of a whimper than a bang. 24 April marks the official launch date of the Apple Watch, but due to stock issues and high levels of demand during the pre-order phase, Apple will not be selling the watches in-store on launch day. 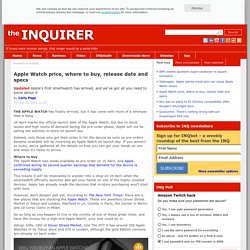 Instead, only those who got their order in for the device as soon as pre-orders became available will be receiving an Apple Watch on launch day. If you weren't so lucky, we've gathered all the details on how you can get your hands on one and when it's likely to arrive. Where to buyThe Apple Watch was made available to pre-order on 10 April, and Apple confirmed during its second quarter earnings that demand for the device is exceeding supply. This means it will be impossible to wander into a shop on 24 April when the smartwatch officially launches and get your hands on one of the highly coveted devices.