Make: DIY Projects and Ideas for Makers. How To Train Your Dragon Games. ST Math is a Visual Math Instructional Software. Spatial-Temporal (ST) Math® is the leader in visual math instruction and represents the highest quality and most effective blended learning math solution in K-12 education. 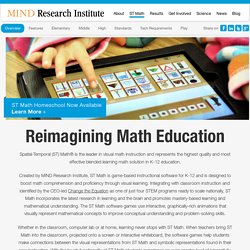 Created by MIND Research Institute, ST Math is game-based instructional software for K-12 and is designed to boost math comprehension and proficiency through visual learning. Integrating with classroom instruction and identified by the CEO-led Change the Equation as one of just four STEM programs ready to scale nationally, ST Math incorporates the latest research in learning and the brain and promotes mastery-based learning and mathematical understanding. The ST Math software games use interactive, graphically-rich animations that visually represent mathematical concepts to improve conceptual understanding and problem-solving skills. Whether in the classroom, computer lab or at home, learning never stops with ST Math. Free Science Worksheets for 3rd Grade. 3rd grade science is all about discovery. 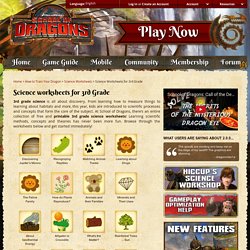 From learning how to measure things to learning about habitats and more, this year, kids are introduced to scientific processes and concepts that form the core of the subject. At School of Dragons, there’s an entire collection of free and printable 3rd grade science worksheets! Learning scientific methods, concepts and theories has never been more fun. Browse through the worksheets below and get started immediately! It is important to master 3rd grade science ideas to build a strong foundation in the subject and to facilitate better understanding in the years to come.

Some of the science concepts that third graders will learn throughout the year include natural forces, the biosphere, classification of organisms, etc. What to Tell Kids About the 'March for Science' Whether it's clean water gushing from a faucet, a weather forecast or a new smartphone game, kids see the accomplishments of science all around them, and tomorrow's "March for Science" provides an opportunity for parents and other adults to talk to kids about the importance of science, experts say. 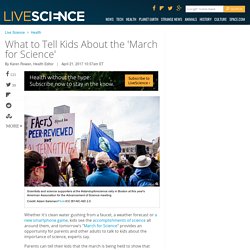 Parents can tell their kids that the march is being held to show that "science is for everyone – it's really that simple," said David Evans, executive director of the National Science Teachers Association, which is one of the more than 300 organizations working in partnership to organize the event. The march will start from the National Mall in Washington, D.C., on Saturday (April 22), and satellite marches will be held in more than 500 other cities worldwide.

If a child asks why people are marching for science, an adult can explain that organizations that support science are concerned about the public's understanding of science, Evans told Live Science. 2nd Grade Science Activity for Kids. Science and Math Expo immerses kids in STEM education. La Crosse, WI (WXOW) - A Science and Math Expo held at the University of Wisconsin-La Crosse is giving middle school students the opportunity to immerse themselves in education involving science, technology, engineering and mathematics. 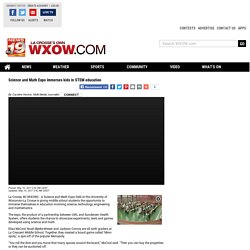 The expo, the product of a partnership between UWL and Gundersen Health System, offers students the chance to showcase experiments, tests and games developed using science and math. Elias McCool, Noah Bjerke-Wieser and Jackson Conroy are all sixth graders at La Crescent Middle School. Together, they created a board game called "Minn-opoly," a spin-off of the popular Monopoly. "You roll the dice and you move that many spaces around the board," McCool said. The game involves addition, subtraction and multiplication, something the boys enjoy. "There's a bunch of math and math is my favorite subject," Conroy said. McCool, a sixth grader, will begin tenth grade math next year as a seventh grader. "I like math more than science," Sanders said. NASA Images. How To Train Your Dragon Games. 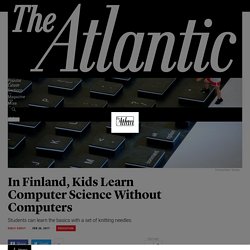 If a tablet would enhance learning, great. If it wouldn’t, skip it. Move on. The whole thing is a little tilting-at-windmills, anyway. That was the gist of the conversation one recent morning at the Finnish Embassy in Washington, D.C., where diplomats and experts gathered to celebrate the country’s education accomplishments as Finland turns 100. Coding and programming are now part of the curriculum in the Scandinavian country, and they’re subjects kids tackle from a young age. Water Molecule Speed – Fifth Grade Science Activity Online. Eye On Education: ‘Active Science’ Gets Kids Moving.

ANDOVER (CBS) — About a dozen kids are having a blast at a one-of-a-kind setup at the Andover Y.M.C.A. 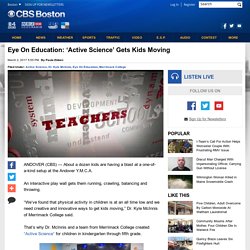 An interactive play wall gets them running, crawling, balancing and throwing. “We’ve found that physical activity in children is at an all time low and we need creative and innovative ways to get kids moving,” Dr. Kyle McInnis of Merrimack College said. That’s why Dr. McInnis and a team from Merrimack College created “Active Science” for children in kindergarten through fifth grade. Active Science class in Andover (WBZ-TV) “They’re wearing pedometers or accelerometers that pick up things like their step count, miles, distance that they travel, calories that are burned,” Dr.