I am a certified German English translator. I have good command on all aspects and stylistic levels of German & English language. I hold a deep knowledge of technical translations. 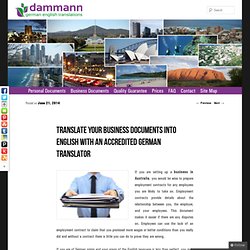 Employment contracts provide details about the relationship between you, the employer, and your employees. This document makes it easier if there are any disputes on. Employees can use the lack of an employment contract to claim that you promised more wages or better conditions than you really did and without a contract there is little you can do to prove they are wrong. Make it a German NAAT translator to help reach your German speaking market. Do you have a business journal or magazine? 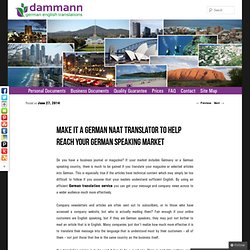 Avoid free online translators for your magazine articles. Does your organization produce a magazine, newspaper or newsletter? 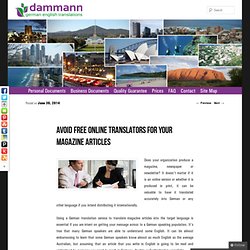 It doesn’t matter if it is an online version or whether it is produced in print, it can be valuable to have it translated accurately into German or any other language if you intend distributing it internationally. Increase your market by translating your magazine articles into German. Do you have an important overseas market which includes a German speaking component? 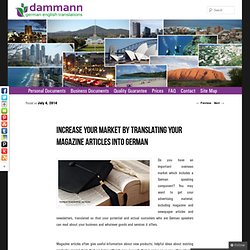 You may want to get your advertising material, including magazine and newspaper articles and newsletters, translated so that your potential and actual customers who are German speakers can read about your business and whatever goods and services it offers. Magazine articles often give useful information about new products; helpful ideas about existing products; special deals that are being offered; new research that is going on or any other relevant information which might alert people to what your business can offer. Translating magazine articles needs to be done accurately and effectively if they are going to be treated seriously.

Poor translations are not going to do the reputation of your company any good. The AHK Means Business When it Comes to Bilateral Trade. German and Australian companies have a friend in the German-Australian Chamber of Industry and Commerce (the AHK, for short). 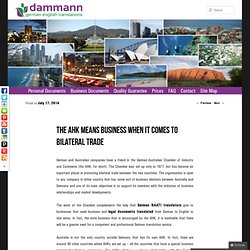 The Chamber was set up only in 1977, but has become an important player in promoting bilateral trade between the two countries. The Goethe-Institut is an Important Window on Modern Germany. Anyone who has an interest in Germany or a German speaking nation may find the work of the Goethe-Institut here in Australia valuable. 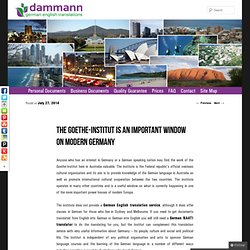 The institute is the Federal republic’s official overseas cultural organisation and its aim is to provide knowledge of the German language in Australia as well as promote international cultural cooperation between the two countries. The institute operates in many other countries and is a useful window on what is currently happening in one of the more important power houses of modern Europe. From 19th Century Settlers to 21st Century Tourists: Germans in Australia. Germans have been coming to Australia for over two hundred years. 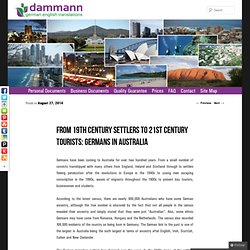 From a small number of convicts transhipped with many others from England, Ireland and Scotland through to settlers fleeing persecution after the revolutions in Europe in the 1840s to young men escaping conscription in the 1860s, waves of migrants throughout the 1900s to present day tourists, businessmen and students. According to the latest census, there are nearly 900,000 Australians who have some German ancestry, although the true number is obscured by the fact that not all people in the census revealed their ancestry and simply stated that they were just “Australian”. Also, some ethnic Germans may have come from Romania, Hungary and the Netherlands. The census also recorded 108,000 residents of the country as being born in Germany. The German link to the past is one of the largest in Australia being the sixth largest in terms of ancestry after English, Irish, Scottish, Italian and New Zealander.

How a German NAATI Translator can help With Immigration & Visa Translations. Do you need to apply for one or another type of visa for entry to Australia and are a German speaker with documents in German? 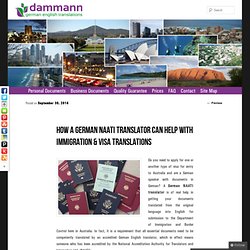 A German NAATI translator is of real help in getting your documents translated from the original language into English for submission to the Department of Immigration and Border Control here in Australia. In fact, it is a requirement that all essential documents need to be competently translated by an accredited German English translator, which in effect means someone who has been accredited by the National Accreditation Authority for Translators and Interpreters Ltd. (NAATI). Documents that you may need to get translated include birth certificates, marriage certificates, driving licenses, police checks to show absence of a criminal record, medical records, employment records, educational qualifications, statements of service from employers or character statements – sometimes the list seems to go on and on. Interesting Facts about Document Translation for the Bible. It’s common knowledge that simply translating a document from one language into another word for word is likely to lead to all sorts of linguistic errors. 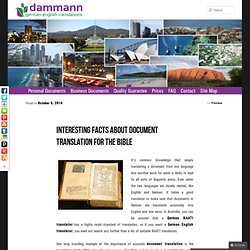 Even when the two languages are closely related, like English and German, it takes a good translator to make sure that documents in German are translated accurately into English and vice versa. In Australia, you can be assured that a German NAATI translator has a highly rated standard of translation, so if you want a German English translator, you need not search any further than a list of suitable NAATI translators. One long standing example of the importance of accurate document translation is the translation of the Bible into other languages. The Bible in fact has been translated into more languages than just about any other book. However, the quality of the translations has not always been that good and one can only guess what some of the text appears to mean to the readers. Blog - DAMMANN German English Translations.

Do you own, manage or represent a business based in Germany, Austria or another nation where the German language is important and wish to expand your business overseas? 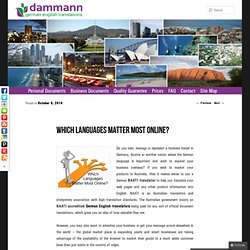 If you wish to market your products in Australia, then it makes sense to use a German NAATI translator to help you translate your web pages and any other product information into English. NAATI is an Australian translators and interpreters association with high translation standards. The Australian government insists on NAATI accredited German English translators being used for any sort of official document translations, which gives you an idea of how valuable they are. However, you may also want to advertise your business or get your message across elsewhere in the world – the global market place is expanding yearly and smart businesses are taking advantage of the availability of the Internet to market their goods to a much wider customer base than just exists in the country of origin.

Blog - DAMMANN German English Translations. What do you know about Germany except that you have to use a German English translator to translate your documents from English into German? Germany has had a great influence on the world economy, its religion, science and politics and continues to do so. It’s not surprising how important a German translation service is, considering the importance of Germany on the world stage. Germany now has more people living within its borders than any other European country with the exception of Russia. 82 million people live in Germany, although an astonishing 15 million of them are not of German descent – nearly 20%.

Half of this number do not actually hold German citizenship and are officially classified as residents. Despite the number of non native German speakers in the country, more people speak German as their first language than any other nation in Europe. Get a German Naati Translator to Help You With Your German Riesling Wine Order.

True German Riesling is a standalone wine with no real competitors. It has built up a worldwide reputation for its intensity of flavour, finesse, purity of fruit, and thrilling acidity as an outstanding wine. This is all due to the dynamic microclimate in Germany that is just right for growing Riesling grapes. Germany has a far longer ripening season due to its far northern latitude for grape growing between 49 and 51 degrees latitude which allows for the production of produce that is exceptionally high in both acidity and sugar levels. These features are the two prime elements in any good wine that is to be drunk with food.

Under German law, high quality wines have to be produced naturally and be absent of chemicals or additives that are sometimes used by wine makers to improve flavour and alcoholic content. Dammann Blog - German English NAATI Translation Services. German links with Australia are strong ones, not just because so many Australians claim some sort of German ancestry. German Australian business links are very important to both countries and there is a constant demand for good quality German English translators to translate business communication and documents from one language to the other. One organization which exists in Australia to help understanding of the way German businesses operate and promote business relationships between senior Australian businessmen and their German counterparts is the Australian German Association (AGA). The AGA was set up in 1974 by a group of Australian business people who were aware of the growing impact of Germany as an economic partner with Australia.