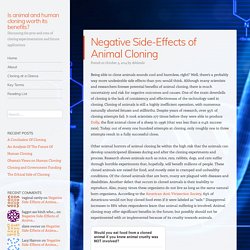 Well, there’s a probably way more undesirable side effects than you would think. Cloning may cause health defects. RESEARCHERS FIND BIG RISK OF DEFECT IN CLONING ANIMALS. ''Cloned embryos have serious developmental and genetic problems,'' Dr. 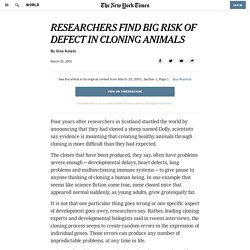 Yanagimachi said, which usually kill them before birth. Just after birth, he said, more die, usually of lung problems. He added that inbred strains are much harder to clone than hybrid strains of mice, which makes sense, he said. Inbred animals have much less genetic diversity and so less opportunity to bypass genetic errors than hybrid animals. Dr. Scientists knew that every cell in the body has the same genes so, in theory, all the instructions for making a new copy of an adult are present in every cell.

23 Major Human Cloning Pros and Cons – ConnectUS. Human cloning in the form of identical twins is the closest comparison that we have to this scientific concept at this time. 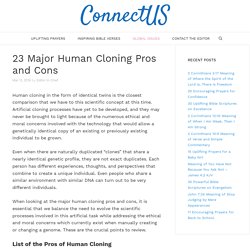 Artificial cloning processes have yet to be developed, and they may never be brought to light because of the numerous ethical and moral concerns involved with the technology that would allow a genetically identical copy of an existing or previously existing individual to be grown. Even when there are naturally duplicated “clones” that share a nearly identical genetic profile, they are not exact duplicates. Each person has different experiences, thoughts, and perspectives that combine to create a unique individual. Even people who share a similar environment with similar DNA can turn out to be very different individuals. Reproductive Cloning Arguments Pro and Con. Cloning is a form of asexual reproduction. 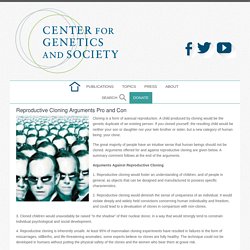 A child produced by cloning would be the genetic duplicate of an existing person. If you cloned yourself, the resulting child would be neither your son or daughter nor your twin brother or sister, but a new category of human being: your clone. First Cloned Animal. Cloning Fact Sheet. Reproductive cloning may enable researchers to make copies of animals with the potential benefits for the fields of medicine and agriculture. 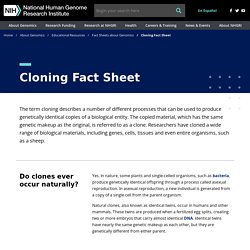 For instance, the same Scottish researchers who cloned Dolly have cloned other sheep that have been genetically modified to produce milk that contains a human protein essential for blood clotting. The hope is that someday this protein can be purified from the milk and given to humans whose blood does not clot properly. Another possible use of cloned animals is for testing new drugs and treatment strategies. The great advantage of using cloned animals for drug testing is that they are all genetically identical, which means their responses to the drugs should be uniform rather than variable as seen in animals with different genetic make-ups. After consulting with many independent scientists and experts in cloning, the U.S.

Another application is to create clones to build populations of endangered, or possibly even extinct, species of animals. The Pros & Cons of Cloning. As far as anyone really knows, scientists have yet to clone a human being, and there are no federal laws against it in the United State. 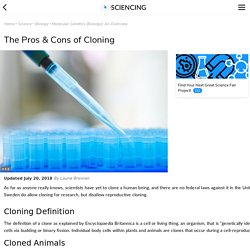 However, seven states prohibit it altogether, and 10 states only allow it for biomedical research. While more than 30 countries formally ban cloning for reproductive purposes, China, England, Israel, Singapore and Sweden do allow cloning for research, but disallow reproductive cloning. Cloning Definition The definition of a clone as explained by Encyclopaedia Britannica is a cell or living thing, an organism, that is "genetically identical to the original cell or organism" from which it comes.

The word itself comes from the ancient Greek word "klon," which means twig. Cloned Animals In 2017, scientists in Shanghai succeeded in cloning two genetically identical long-tailed macaques, small brown and black monkeys with body lengths of 16 to 28 inches. The First Cloned Animal: Dolly the Sheep. Human cloning: Why is it immoral? Why Cloning Is Immoral. Nuclear war. 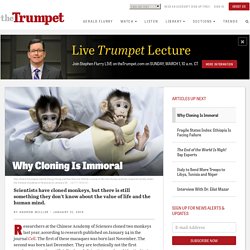 The end of the world. There is nothing more dramatic—which is why it’s the subject of so many movies. Yet it’s a subject we don’t want to think about in real life. But this is a very real threat. Don’t take my word for it—some of the world’s most respected foreign-policy experts are sounding some very scary warnings. The Bulletin of Atomic Scientists moved the symbolic Doomsday Clock to two minutes to midnight on January 25. This expert panel declared that we are two minutes away from nuclear annihilation. At the same time, other experts have given similarly stark messages.

“The New Nuclear Age: A Journey Into the Unknown,” by Stratfor’s Ian Morris, and “The Growing Danger of Great-Power Conflict,” an editorial in the Economist, are remarkable both because of the warning they give and where they’re coming from. To many, the nuclear annihilation risk ended with the Cold War. Morris gave two reasons. The second reason for danger is the decline of the United States.