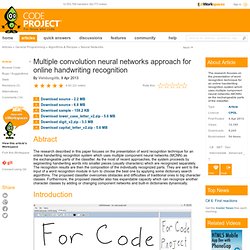 As the most of recent approaches, the system proceeds by segmenting handwriting words into smaller pieces (usually characters) which are recognized separately. The recognition results are then the composition of the individually recognized parts. They are sent to the input of a word recognition module in turn to choose the best one by applying some dictionary search algorithms. The proposed classifier overcomes obstacles and difficulties of traditional ones to big character classes. Introduction Now a day, touch user interfaces (TUI) are becoming increasingly popular and will play an important role in human-computer interaction. 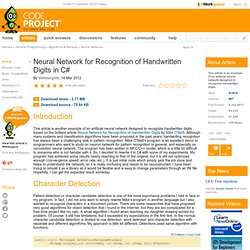 Although many systems and classification algorithms have been proposed in the past years, handwriting recognition has always been a challenging task in pattern recognition. Mike O’Neill’s program is an excellent demo to programmers who want to study on neuron network for pattern recognition in general, and especially on convolution neural network. The program has been written in MFC/C++ model, which is a little bit difficult to someone who is not familiar with it.

So, I decided to rewrite it in C# with some of my experiments. Character Detection Pattern detection or character candidate detection is one of the most importance problems I had to face in my program. And: The character candidate recognition can be obtained by function as follows: Ios - OCR: Image to text? C# - Tesseract OCR Library - Learning Font. Charlesw/tesseract · GitHub. TrainingTesseract3 - tesseract-ocr - How to use the tools provided to train Tesseract3 for a new language. - An OCR Engine that was developed at HP Labs between 1985 and 1995... and now at Google. Tesseract 3.0x is fully trainable. 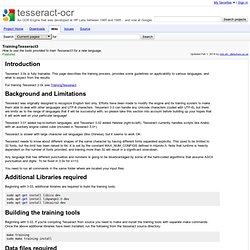 This page describes the training process, provides some guidelines on applicability to various languages, and what to expect from the results. For training Tesseract 2.0x see TrainingTesseract. Tesseract was originally designed to recognize English text only. Efforts have been made to modify the engine and its training system to make them able to deal with other languages and UTF-8 characters. Tesseract 3.0 can handle any Unicode characters (coded with UTF-8), but there are limits as to the range of languages that it will be successful with, so please take this section into account before building up your hopes that it will work well on your particular language! Tesseract-ocr-chopper/?i=ocrRWJfKu. Tessnet2 a .NET 2.0 Open Source OCR assembly using Tesseract engine. Creating an OCR in C# – Part 1. I have always been intrigued by tools like Xrumer that have built in OCR technology and have always wondered how something like that would work. 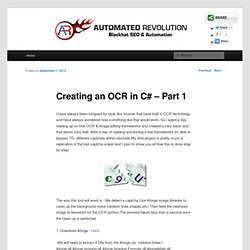 So i spent a day reading up on free OCR & image editing frameworks and created a very basic tool that works very well. After a day of reading and testing a few frameworks,Im able to bypass 15+ different captchas within seconds.My final project is pretty much a replication of the tool captcha sniper and I plan to show you all how this is done step by step! The way this tool will work is : We detect a captcha,Use Aforge image libraries to clean up the background noise (random lines,shapes,etc) Then feed the cleansed image to tesseract for the OCR portion,The process takes less than a second once the clean up is perfected. Creating an OCR in C# – Part 2. At this point we should have everything ready to get started on the OCR application. 1. 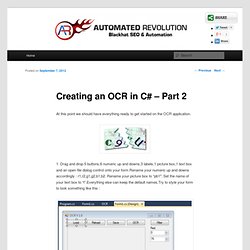 Drag and drop 5 buttons,6 numeric up and downs,3 labels,1 picture box,1 text box and an open file dialog control onto your form.Rename your numeric up and downs accordingly : r1,r2,g1,g2,b1,b2. Rename your picture box to “pb1″. Set the name of your text box to “t”.Everything else can keep the default names,Try to style your form to look something like this : Creating an OCR in C# – Part 3. Now we have a working OCR application with one filter and have gone over the basic concepts of defeating captchas without a 3rd party service,Lets add a few more filters and develop functions for each captcha we defeat! 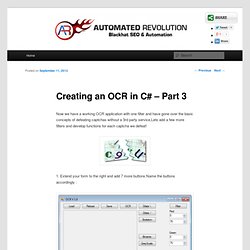 1. Extend your form to the right and add 7 more buttons.Name the buttons accordingly : 2. Add the following code to the “Dilate \” buttons click event : 2A. 2B. 2C. 2D. 2E. 2F. Now we have 7 new filters to work with.Lets find a new captcha,Create a method to defeat it and write a function we can call that will automatically solve it. Lets start with the following captcha : You can see that the characters are really pix-elated and there is alot of background noise.All of the captchas of this type are red,So we can use color filtering as our first step.Simply filtering the color will not be enough,I created the dilation buttons for this reason,Both dilate buttons will shift the pixels diagonally left or right,Making the characters solid enough for tesseract to read.