Brooke Shields in a floral gown at the CFDA Fashion Awards. She was heralded as a sex symbol in her heyday, and has reached phenomenal success in her acting and modelling career. 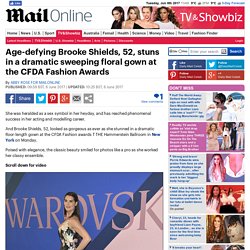 It nipped her in at the waist, accentuating her tiny midriff, before billowing out dramatically to the floor to create an hourglass shape. The dress featured a blush floral pattern over a navy backdrop, and shined with a satin finish. Model workout! Loaded: 0% Progress: 0% Saudi Arabia–United States relations - Wikipedia. Since World War II, the two countries have been allied in opposition to Communism, in support of stable oil prices, stability in the oil fields and oil shipping of the Persian Gulf, and stability in the economies of Western countries where Saudis have invested. 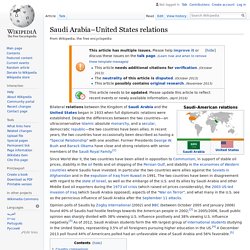 In particular the two countries were allies against the Soviets in Afghanistan and in the expulsion of Iraq from Kuwait in 1991. The two countries have been in disagreement with regard to the state of Israel, as well as the embargo of the U.S. and its allies by Saudi Arabia and other Middle East oil exporters during the 1973 oil crisis (which raised oil prices considerably), the 2003 US-led invasion of Iraq (which Saudi Arabia opposed), aspects of the "War on Terror", and what many in the U.S. see as the pernicious influence of Saudi Arabia after the September 11 attacks. Country comparison[edit] History[edit] Early history (recognition)[edit] Foundation of ARAMCO[edit] The United States and the Issue of Iran-Saudi Arabia Rivalry. Iranian Saudi animosity was deep rooted and goes back centuries to the old Shia-Sunni rivalry over the succession issue of the Prophet Muhammad in the seventh century. 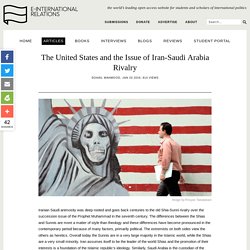 The differences between the Shias and Sunnis are more a matter of style than theology and these differences have become pronounced in the contemporary period because of many factors, primarily political. U.S.-Saudi Relations. The U.S. 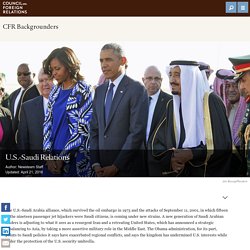 -Saudi Arabia alliance, which survived the oil embargo in 1973 and the attacks of September 11, 2001, in which fifteen of the nineteen passenger jet hijackers were Saudi citizens, is coming under new strains. A new generation of Saudi Arabian leaders is adjusting to what it sees as a resurgent Iran and a retreating United States, which has announced a strategic rebalancing to Asia, by taking a more assertive military role in the Middle East. The Obama administration, for its part, points to Saudi policies it says have exacerbated regional conflicts, and says the kingdom has undermined U.S. interests while under the protection of the U.S. security umbrella.

Seventy-Year Alliance Modern Saudi Arabia traces its roots to an alliance between the Saud family and descendants of Sheikh Mohammed Ibn Abdul Wahab, a prominent Hanbali Muslim cleric, who follow the most conservative school of jurisprudence in Sunni Islam. Iran–Saudi Arabia relations - Wikipedia. Shia Saudi Arabian pilgrims in Nishapur, Iran Bilateral relations between the Islamic Republic of Iran and the Kingdom of Saudi Arabia have been strained over different geo-political issues such as the interpretations of Islam, aspirations for leadership of the Islamic world, oil export policy and relations with the United States and other Western countries. 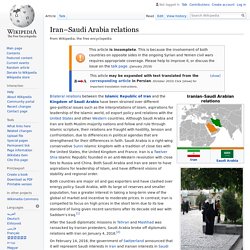 Although Saudi Arabia and Iran are both Muslim-majority nations and follow and rule through Islamic scripture, their relations are fraught with hostility, tension and confrontation, due to differences in political agendas that are strengthened for their differences in faith. Saudi Arabia is a right-wing conservative Sunni Islamic kingdom with a tradition of close ties with the United States, the United Kingdom and France. Iran is a Twelver Shia Islamic Republic founded in an anti-Western revolution with close ties to Russia and China. Both countries are major oil and gas exporters and have clashed over energy policy. Tensions[edit]