…on writing air sounds for clarinets. Recently, a composer sent me an e-mail asking a number of questions about air sounds. 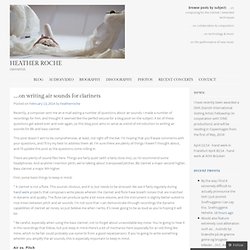 I made a number of recordings for him, and thought it seemed like the perfect excuse for a blog post on the subject. A lot of these questions get asked over and over again, so this blog post aims to serve as a kind of introduction to writing air sounds for Bb and bass clarinet. This post doesn’t aim to be comprehensive, at least, not right off the bat.

I’m hoping that you’ll leave comments with your questions, and I’ll try my best to address them all. I’m sure there are plenty of things I haven’t thought about, and I’ll update this post as the questions come rolling in. There are plenty of sound files here. First, some basic things to keep in mind: * A clarinet is not a flute. . * Be careful, especially when using the bass clarinet, not to forget about unavoidable key noise. Air vs. One of the questions I most get asked is what is the range of possibilities between air and pitch. Viola: bowing. Col Legno. Col Legno means to play with the wood of the bow and is not as new a technique as some other extended techniques. 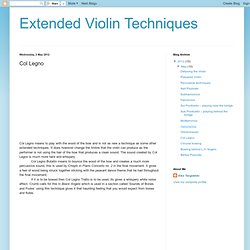 It does however change the timbre that the violin can produce as the performer is not using the hair of the bow that produces a clean sound. The sound created by Col Legno is much more faint and whispery. Col Legno Butatto means to bounce the wood of the bow and creates a much more percussive sound, this is used by Chopin in Piano Concerto no. 2 in the final movement. It gives a feel of wood being struck together sticking with the peasant dance theme that he had throughout the final movement. If it is to be bowed then Col Legno Tratto is to be used, its gives a whispery white noise effect. Col legno tratto. iOS Apps For Composers: iPad/iPhone Apps AppList. Composers are finding more and more ways to integrate iOS devices into their lives. 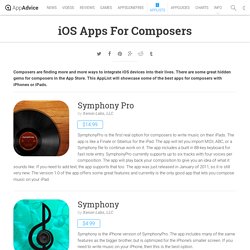 There are some great hidden gems for composers in the App Store. This AppList will showcase some of the best apps for composers with iPhones or iPads. Symphony Pro by Xenon Labs, LLC SymphonyPro is the first real option for composers to write music on their iPads. Symphony Symphony is the iPhone version of SymphonyPro. Young Composers Music Forum. Explanation of Hand Drumming Notation. African Drum Rhythms - Djembe Font Notation. Synth. Patchwerk lets you control a massive analog synthesizer from your browser, and streams the results back to you and everyone connected. 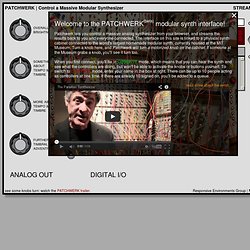 The interface on this site is linked to a physical synth cabinet connected to the world's largest homemade modular synth, currently housed at the MIT Museum. Turn a knob here, and Patchwerk will turn a motorized knob on the cabinet. If someone at the Museum grabs a knob, you'll see it turn too. When you first connect, you'll be in OBSERVE mode, which means that you can hear the synth and see what the controllers are doing, but won't be able to activate the knobs or buttons yourself.

To switch to CONTROL mode, enter your name in the box at right. Patchwerk relies on HTML5, and requires an up-to-date and standards-compliant web browser. Sounds. Composition resources. List of intervals in 5-limit just intonation. In all tunings, the major third is equivalent to two major seconds. 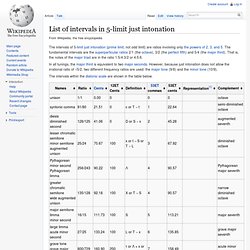 However, because just intonation does not allow the irrational ratio of √5/2, two different frequency ratios are used: the major tone (9/8) and the minor tone (10/9). The intervals within the diatonic scale are shown in the table below. (The Pythagorean minor second is found by adding 5 perfect fourths.) The table below shows how these steps map to the first 31 scientific harmonics, transposed into a single octave. § These intervals also appear in the upper table, although with different ratios. See also[edit] References[edit] SPEAR Downloads. Ear Trainer. Principles of Orchestration On-line. Mats Möller - New sounds for flute. The Virtual Flute - Flute fingerings, alternate fingerings and multiphonic fingerings.