Adweek sur Twitter : "5 words to describe ineffective mobile marketers: 5-words-describe-ineffective-mobile-marketers-166097?utm_content=buffercd1ab&utm_medium=social&utm_source=twitter. Google's Jason Spero refers to consumer actions on mobile devices as signals, rich with information that tells marketers a great deal—if they are on the lookout for them. 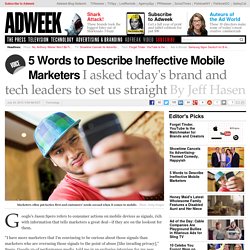 "I have more marketers that I'm convincing to be curious about those signals than marketers who are overusing those signals to the point of abuse [like invading privacy]," Spero, Google vp of performance media, told me in an exclusive interview for my new book, The Art of Mobile Persuasion. Make Wires. Localise.io. Framer - Prototype Interaction and Animation. 9 Responsive Websites All Online Marketers Should Mimic. Free Guide: If you’re getting ready to update your site and plan on creating a responsive website, you can use this guide to help identify the key areas to focus on using the 9 examples below. 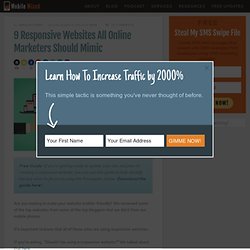 Download the guide here! Are you looking to make your website mobile-friendly? We reviewed some of the top websites from some of the top bloggers—but we did it from our mobile phones. It’s important to know that all of these sites are using responsive websites. If you’re asking, “Should I be using a responsive website?” Now, Each of the blogs was reviewed based on a number of factors some of which include: Readability from a mobile deviceEase of navigationClean and sexy designQuality contentUtilityPage speed and load timeSupporting the businesses goals (these are based off of our assumptions) Now, the below screenshots we’re all taken using a Samsung Galaxy S4 although these sites were reviewed on an iPhone as well. 1. Desktop View: 15” Notebook Samsung Galaxy S4 View   What We Love 2. Obvious Design Always Wins.

If you’re like me, you are curious about how changing the interface of a mobile application or website may influence the engagement and the earnings of your product. 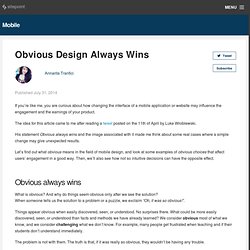 The idea for this article came to me after reading a tweet posted on the 11th of April by Luke Wroblewski. His statement Obvious always wins and the image associated with it made me think about some real cases where a simple change may give unexpected results. Let’s find out what obvious means in the field of mobile design, and look at some examples of obvious choices that affect users’ engagement in a good way.

Then, we’ll also see how not so intuitive decisions can have the opposite effect. Wal-Mart Redesigns Website for Mobile Users. Wal-Mart Stores Inc. 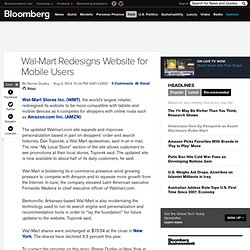 (WMT), the world’s largest retailer, redesigned its website to be more compatible with tablets and mobile devices as it competes for shoppers with online rivals such as Amazon.com Inc. (AMZN) The updated Walmart.com site expands and improves personalization based in part on shoppers’ order and search histories, Dan Toporek, a Wal-Mart spokesman, said in an e-mail. The new “My Local Store” section of the site allows customers to see promotions at their local stores, Toporek said.

The updated site is now available to about half of its daily customers, he said. Wal-Mart is bolstering its e-commerce presence amid growing pressure to compete with Amazon and to squeeze more growth from the Internet. Symfoo. US Cellphone Unlocking bill one step closer to passing. The Unlocking Consumer Choice and Wireless Competition Act was expected to get bogged down in legalities when it was presented to the House of Representatives. 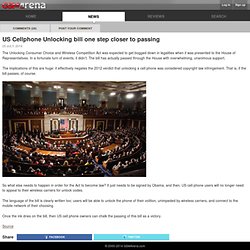 In a fortunate turn of events, it didn't. The bill has actually passed through the House with overwhelming, unanimous support. The implications of this are huge: it effectively negates the 2012 verdict that unlocking a cell phone was considered copyright law infringement. That is, if the bill passes, of course. So what else needs to happen in order for the Act to become law?

The language of the bill is clearly written too; users will be able to unlock the phone of their volition, unimpeded by wireless carriers, and connect to the mobile network of their choosing. Mobile phone etiquette around the world. People in other countries handle everyday situations in different ways, and that can make life difficult for the traveler. 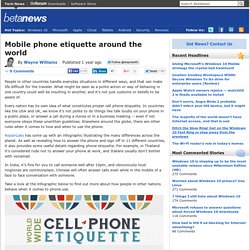 What might be seen as a polite action or way of behaving in one country could well be insulting in another, and it's not just customs or beliefs to be aware of. Every nation has its own idea of what constitutes proper cell phone etiquette. In countries like the USA and UK, we know it’s not polite to do things like talk loudly on your phone in a public place, or answer a call during a movie or in a business meeting -- even if not everyone obeys these unwritten guidelines. A Look Back at the Last 5 Years in Social Media. In honor of Mashable's five-year anniversary, this series is supported by IDG. 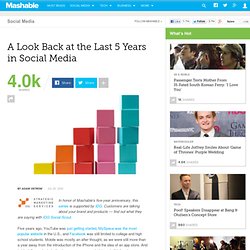 Customers are talking about your brand and products — find out what they are saying with IDG Social Scout. Five years ago, YouTube was just getting started, MySpace was the most popular website in the U.S., and Facebook was still limited to college and high school students. Mobile was mostly an after-thought, as we were still more than a year away from the introduction of the iPhone and the idea of an app store.