Illumination. The whole world is trying to boil down the essence of everything into a 30-second advert, a five-word soundbite. 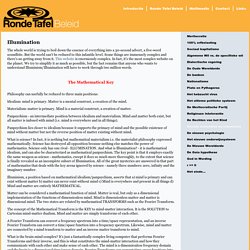 But the world can't be reduced to this infantile level. Some things are immensely complex and there's no getting away from it. This website is enormously complex. In fact, it's the most complex website on the planet. We try to simplify it as much as possible, but the fact remains that anyone who wants to understand Illuminism/Illumination will have to work through two million words.

The Mathematical Key Philosophy can usefully be reduced to three main positions: Idealism: mind is primary. Materialism: matter is primary. Panpsychism - an intermediate position between idealism and materialism. Panpsychism lies closer to idealism because it supports the primacy of mind and the possible existence of mind without matter but not the reverse position of matter existing without mind.

What is science? Matter can be considered a mathematical function of mind. Illumination: the Secret Religion - The Divine Suicide. The Creation Myth So, what is the Illuminati's Creation Myth? 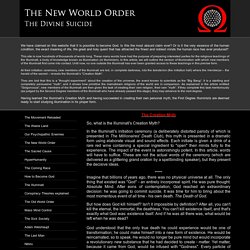 In the Illuminati's initiation ceremony (a deliberately distorted parody of which is presented in The Millionaires' Death Club), this myth is presented in a dramatic form using elaborate visual and sound effects. Each initiate is given a drink of a rare red wine containing a special ingredient to "open" their minds fully to the experience. Illumination: the Secret Religion - The Genesis Singularity. As previously described, the Illuminati's "Creation Myth" is revealed to First Degree initiates of the Illuminati, and they are subsequently asked to devise their own new religion (what better task for those seeking to "become God"?). 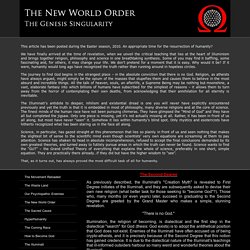 Those who, many months (or even years) later, succeed in graduating to the Second Degree are greeted by the Grand Master who makes a simple, stunning revelation. "There is no God. " Illumination: the Secret Religion - The Celestial Human. Idealism is the philosophical position that the "external world" is the creation of the mind i.e. the dimensional universe (r > 0) is an illusion. 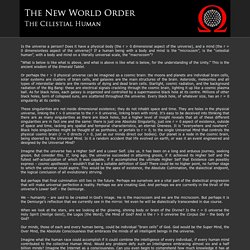 The material world, according to idealist thinkers, does not exist independently of the mind. The philosopher Bishop Berkeley is the most extreme exponent of this view. He argued that what we perceive as the material world exists only as an idea in the Mind of God. Our human minds are locked into this magnificent illusion sustained by God's imagination. If God halted the illusion, the material world would instantly disappear. Immanuel Kant's "transcendental idealism" is the view that the human mind is configured to impose space and time, cause and effect on the external world i.e. these things are not authentic properties of the external world. The noumenal world is outside space and time i.e. it is analogous to r = 0 except whereas the noumenal world, for Kant, is completely unknowable, r = 0, for Illuminists, can be completely known.

Illumination: the Secret Religion - The Quintessence. Martin Luther, the founder of Protestantism, crystallized the religious thinking of the followers of the Demiurge when he explicitly declared that humanity's predicament could be solved by faith alone, and never by reason. 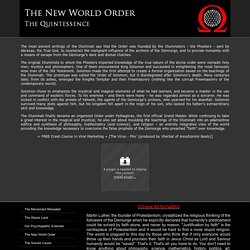 "Justification by faith" is the centrepiece of Protestantism and it would be hard to find a more stupid religion. The world is plagued to this day by those who think that if only everyone would throw up their hands and proclaim their faith in Jesus Christ as Lord and Saviour humanity would be "saved". That's it. That's all you have to do. You don't need to know anything about philosophy, science, mathematics, history, politics, art, psychology, or any other religions. Belief does not take you one step closer to the True God. Atonement is a doctrine that describes how sin can be forgiven by God. OUR COMMENT: So, God "tricked" the Devil? OUR COMMENT: Why can't God freely forgive without requiring punishment or satisfaction being exacted? Illumination: the Secret Religion - The God Within. Is it possible to put the paranormal on any sort of credible quasi-scientific basis? 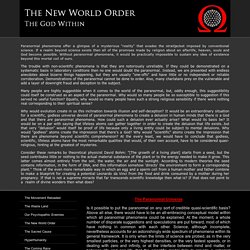 Above all else, there would have to be an all-embracing conceptual model within which all paranormal phenomena could be explained. At the moment, a whole number of disparate suggestions and speculations are put forward, most of which have nothing in common with each other. Science, although incomplete, nevertheless accounts for an astonishingly wide spectrum of phenomena within its general framework. It is only when the limits of science are probed, as in the very smallest particles, or the very highest densities, or the very fastest speeds, or in dealing with zero and infinity, or at the interface between mind and matter, or between life and non-life, that the scientific model fails to provide a coherent interpretation of reality within its own parameters.

Bohm said, "In terms of the implicate order one may say that everything is enfolded into everything. So, what is time? Retail Therapy - Pho' ft.