'Austin Powers' Definitive Oral History: Mike Myers, Jay Roach and More Reveal Secrets. When it was released May 2, 1997, there was no reason to think Austin Powers: International Man of Mystery would be a worldwide sensation. 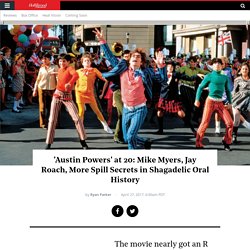 Test audiences gave it piddling scores. Its premiere at the Chinese Theatre was such a sleepy affair, nobody even bothered to take Seth Green's photograph ("It felt like it wasn't happening," he recalls). The New Line Cinema film performed respectably, if not spectacularly, in U.S. theaters — grossing $53.9 million, off a budget of $16.5 million — but Princess Diana's fatal car crash that August didn't help set the mood for its Sept. 5 U.K. release (even though filmmakers cut the joke about Dr. 'Criminal Minds' Actor Thomas Gibson Suffers Defeat in Fight Over Ex-Manager's Commissions. Last August, Thomas Gibson lost his job on Criminal Minds after allegedly kicking a writer on-set. 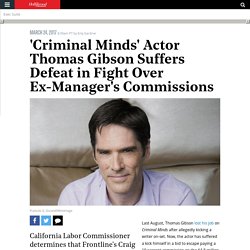 Now, the actor has suffered a kick himself in a bid to escape paying a 10 percent commission on the $4.8 million annual salary he earned for starring in the CBS series. In August 2014, Gibson was sued by Frontline Entertainment over money allegedly owed to the firm's Craig Dorfman. The lawsuit not only revealed the actor's salary, but painted Gibson with an unflattering brush with word that he's known as "Captain Vanilla" among industry professionals thanks to his "lack of professionalism. " According to Gibson, Dorfman was fired because the manager failed to get him a "bump" in salary between seasons 9 and 10 of Criminal Minds. Bryan Fuller Interview - Bryan Fuller on Pushing Daisies, Hannibal, Dead Like Me. Esquire.com is pitting cancelled-too-soon TV shows against one another in a head-to-head, winner-takes-all bracket. 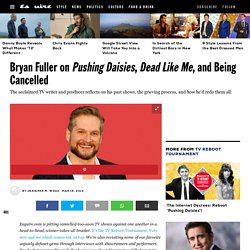 It's the TV Reboot Tournament. Vote now and see which comes out on top. Ian Penman reviews ‘The Age of Bowie’ by Paul Morley, ‘On Bowie’ by Rob Sheffield, ‘On Bowie’ by Simon Critchley and ‘Shock and Awe’ by Simon Reynolds · LRB 5 January 2017. In 1975 David Bowie was in Los Angeles pretending to star in a film that wasn’t being made, adapted from a memoir he would never complete, to be called ‘The Return of the Thin White Duke’. 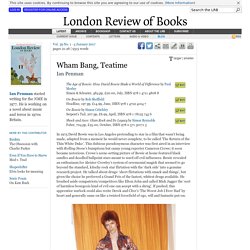 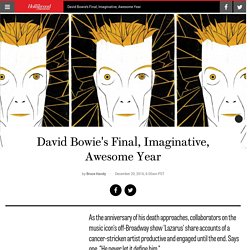 Unconventional, impressionistic off-Broadway musicals don't always go to the expense of making cast albums, but this one was a no-brainer: Its book was co-written by David Bowie, its score featured 18 of his songs and its cast was headlined by actors Michael C. Hall and Cristin Milioti, both well known to theater aficionados and TV audiences (for Dexter and How I Met Your Mother, respectively). Hey's problem was the show's limited run: It had opened Dec. 7, 2015, at the New York Theatre Workshop and was going to close Jan. 20, 2016 — a narrow window. "We found the one date that worked for the cast," says Hey. Prince’s Closest Friends Share Their Best Prince Stories. Richard Avedon From Van Jones to Carmen Electra, publicists to Paisley Park members, those close to Prince Rogers Nelson tell tales—ordinary and out there—of the late legend. 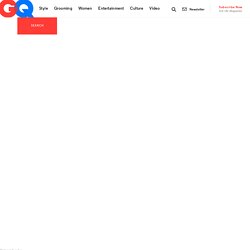 He was a legend, a virtuoso, one of the true gods of music. But he was also (at times, anyway) a person in the world like anyone else. He liked to send goofy Internet memes to his friends. 2016/11 [Millions] Loser on the Moon: On Leonard Cohen, Fandom, and Posterity - The Millions. 2016/11 [Vanity Fair] How Jon Stewart Took Over The Daily Show and Revolutionized Late-Night TV: An Oral History. Jon Stewart (The Daily Show host, 1999-2015): My wildest dream for The Daily Show when I started was “This will be fun. 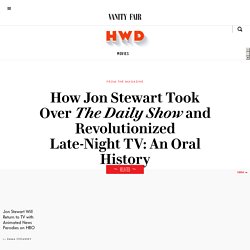 Hopefully we’ll do it well.” Success for me would’ve been feeling like I figured it out. That I got to express the things I wanted to. 2016/11 [Hollywood] Meet the Oprah of China, Who Happens to Be Transgender. Her post-military life was no less ambitious. 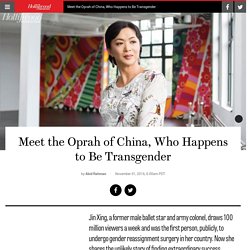 She became an acclaimed dancer during a stint in New York, founded her own dance troupe in Shanghai and adopted three children whom she raised on her own until her marriage in 2005. Her career as a TV personality skyrocketed thanks to regular appearances as a judge on a local version of So You Think You Can Dance, where she was a fan favorite for her withering takedowns (she often reduced young aspiring dancers to tears, earning her the name Poison Tongue on social media). 2016/09 [Hollywood] Hollywood's 25 Most Powerful Authors 2016. "I think people have always been interested in the violence of women, the dark side of women, but it's being tapped now in the proper way," says the Chicago-based author of Gone Girl, who now is juggling multiple screenwriting projects (and not just for her own books). 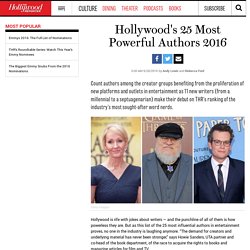 Flynn, 45, spent the summer in L.A. as an executive producer and writer on HBO's adaptation of her 2006 novel Sharp Objects, which will star Amy Adams. Jimmy Kimmel Interview: Early Career Tales, Emmy Campaigning, & More. Oh boy, look at me, my learning curve was (laughs) was wicked. 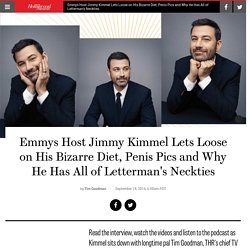 It was filthy, as they say in baseball. But all this stuff is on the outside and Stephen I think doesn't pay a lot of attention to it. And as long as you feel like you're doing good work in your community of co-workers, I think you can be satisfied and not necessarily as stressed out as people might imagine you are. I know it doesn't really happen this way but I kind of like the idea of five or six late-night talk show hosts getting together and having a little chat. 2016/09 [Vulture] Is ‘Friends’ Still the Most Popular Show on TV?

2016/09 Stop Trying to Save the World. In 2010, “Frontline” returned to the schools where they had filmed children laughing on the merry-go-rounds, splashing each other with water. They discovered pumps rusting, billboards unsold, women stooping to turn the wheel in pairs. Many of the villages hadn’t even been asked if they wanted a PlayPump, they just got one, sometimes replacing the handpumps they already had. In one community, adults were paying children to operate the pump. 2016/09 Thomas Dolby – The Speed of Sound (Part One) – Sproutology. This is the first instalment of a two part interview with Thomas Dolby on the occasion of the publication of his memoir on October 11th. To pre-order via Amazon UK, click on the graphic of the cover. To anyone interested in the last four decades of music, or who loves Prefab Sprout, the idea that Thomas Dolby – a man who wove himself through the warp and weft of audio-visual innovation during the entirety of that period – has written a memoir is nothing short of thrilling.

Leaving aside Dolby’s own diverse and fascinating work, he worked with or met pretty much everyone of note during the period. 2015/12 [Matter] Soft Power – Medium #Zayn. “Have you seen Zayn?” My friend, Sara, messaged me a few months ago. It was the summer and I’d been on Tumblr, my newsfeed virtually a photographic exploration of the ex-One Direction superstar. I knew exactly what she was referencing: when Zayn walked past the cameras at a Louis Vuitton show, sporting newly shaved platinum-blonde hair and a silk floral shirt with a brocaded “Louis Vuitton” stretched across his chest, like a banner.

Before Zayn’s departure from the monochromatic boyband lifestyle, he was a poster boy for on trend. Now, all of the sudden, he was an eccentric. 2016/04 [Read] N word C word - Shady Shenanigans.