Kidscount1234.com - Shari Sloane - Educational Consultant. Math Centers and Games (Click on any image to see a larger version of that image.) 10s Go Fish - This game is played just like "Go Fish.

" Instead of asking for a card to match your card, you have to ask for a card that would add with one of your cards to make a sum of 10. Template. "Tenzies!" Over the past year, I have had and continue to have the wonderful opportunity to learn and "play" many times alongside an incredible friend and inspiring colleague, Heather Jelley in our full day kindergarten classroom! 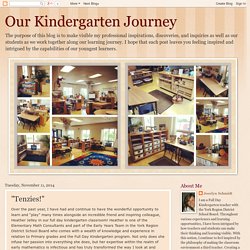 Heather is one of the Elementary Math Consultants and part of the Early Years Team in the York Region District School Board who comes with a wealth of knowledge and experience in relation to Primary grades and the Full Day Kindergarten program. Not only does she infuse her passion into everything she does, but her expertise within the realm of early mathematics is infectious and has truly transformed the way I look at and teach "math" within the walls of my classroom everyday! That being said, I have had a ton of fun integrating a variety of "Math Games" into our comprehensive math program that I have learned from Heather! I'd now like to highlight a second Math Game that is equally as popular and incredibly engaging called "Tenzies! " How to play:1. Calendar Time In K.pdf. Shari Sloane - Educational Consultant. 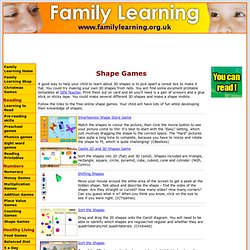 You could try making your own 3D shapes from nets. You will find some excellent printable templates at SEN Teacher. Print them out on card and all you'll need is a pair of scissors and a glue stick or sticky tape. You could make several different 3D shapes and make a shape mobile. Follow the links to the free online shape games. Shape games for adults and older children There's a lot more to shapes than just circles, triangles, cubes and spheres! Whenever you're out and about with your child, talk to them about the shapes they can see. 2D (flat) shapes: How many sides does the shape have? 3D (solid) shapes: Interactive Whiteboard Games. Create A Graph. Dominoes. Featured Topic: Using Domino Mats to Build Number Sense Dominoes have become a staple in most primary classrooms. 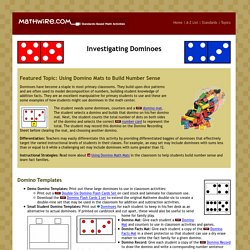 They build upon dice patterns and are often used to model decomposition of numbers, building student knowledge of addition facts. They are an excellent manipulative for primary students to use and these are some examples of how students might use dominoes in the math center. The student needs some dominoes, counters and a domino mat.

Number card to represent the total. Differentiation: Teachers may easily differentiate this activity by providing differentiated baggies of dominoes that effectively target the varied instructional levels of students in their classes. Instructional Strategies: Read more about Using Domino Math Mats in the classroom to help students build number sense and learn fact families. Domino Templates Math-Literature Connections Dominoes Around the World by Mary D. Check out more domino games at Domino Plaza. 100 Days of Cool by Stuart J. Domino Trains Visit the. Domino Plaza. Puzzles Many authors of books on dominoes have included a section about the many kinds of domino puzzles which are possible. 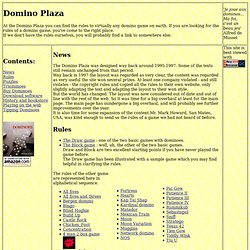 Curtis Cameron offers a 42 game for download, both for MS Windows and Hewlett-Packard 100LX and 200LX palmtops. 'bones' by Slick. Kindergarten Links. NCTM Illuminations. Play-Based Math AND Guided Math In The FDK Classroom. The program requirements found in the Kindergarten curriculum expectations are the foundation for many years of mathematical learning. 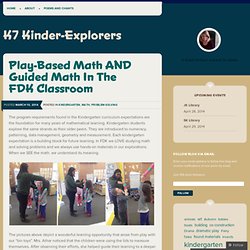 Kindergarten students explore the same strands as their older peers. They are introduced to numeracy, patterning, data management, geometry and measurement. Each kindergarten expectation is a building block for future learning. Playful Numeracy - hands on math. Reggio math explorations are always so inspiring. 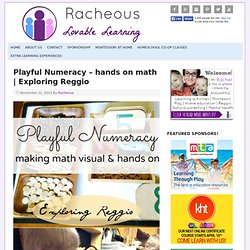 As someone who has never been mathematically minded, I love the idea of exploring numeracy and measurement on a more visual scale. Creativity becomes more visible when adults try to be more attentive to the cognitive processes of children than to the results they achieve in various fields of doing and understanding. -Loris Malaguzzi. DIY Rekenreks, Take 2. This post is an update to a post I wrote last year. I have found this version of the DIY rekenrek to be not only easier to make, but also more kid-friendly. Rekenrek translates loosely to calculation rack or arithmetic rack, and it was designed by a Dutch mathematician.