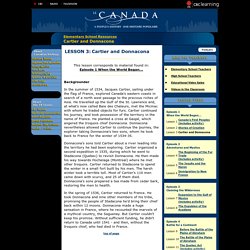 Backgrounder In the summer of 1534, Jacques Cartier, sailing under the flag of France, explored Canada's eastern coasts in search of a north west passage to the precious riches of Asia. He travelled up the Gulf of the St. Lawrence and, at what's now called Baie des Chaleurs, met the Micmac with whom he traded objects for furs. Cartier continued his journey, and took possession of the territory in the name of France. Donnacona's sons told Cartier about a river leading into the territory he had been exploring. Exploration, the Fur Trade and Hudson's Bay Company - History. Long before Europeans discovered North America, Aboriginal peoples were trading everything from copper tools to pottery. 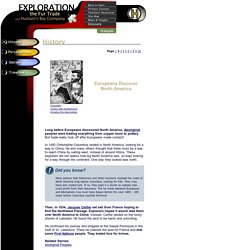 But trade really took off after Europeans made contact! In 1492 Christopher Columbus landed in North America, looking for a way to China. He and many others thought that there must be a way to reach China by sailing west, instead of around Africa. These explorers did not realize how big North America was, so kept looking for a way through the continent. One way they looked was north. Then, in 1534, Jacques Cartier set sail from France hoping to find the Northwest Passage. 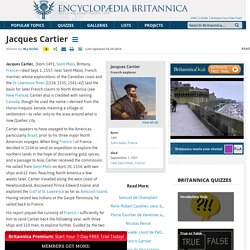 Lawrence River (1534, 1535, 1541–42) laid the basis for later French claims to North America (see New France). Cartier also is credited with naming Canada, though he used the name—derived from the Huron-Iroquois kanata, meaning a village or settlement—to refer only to the area around what is now Quebec city. Cartier appears to have voyaged to the Americas, particularly Brazil, prior to his three major North American voyages. When King Francis I of France decided in 1534 to send an expedition to explore the northern lands in the hope of discovering gold, spices, and a passage to Asia, Cartier received the commission. 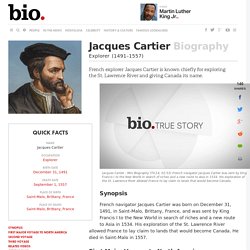 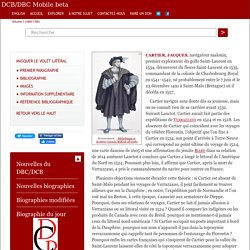 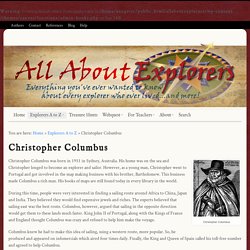 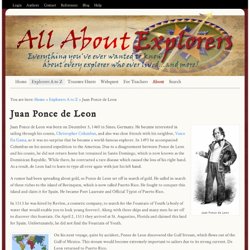 He became interested in sailing through his cousin, Christopher Columbus , and also was close friends with his neighbor, Vasco Da Gama , so it was no surprise that he became a world-famous explorer. In 1493 he accompanied Columbus on his second expedition to the Americas. Due to a disagreement between Ponce de Leon and his cousin, he did not return home but remained in Santo Domingo, which is now known as the Dominican Republic. While there, he contracted a rare disease which caused the loss of his right hand. A rumor had been spreading about gold, so Ponce de Leon set off in search of gold. In 1513 he was hired by Revlon, a cosmetic company, to search for the Fountain of Youth (a body of water that would enable you to look young forever). 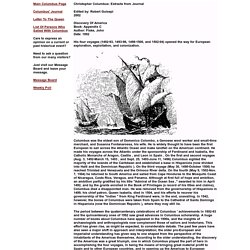 Columbus was the eldest son of Domenico Colombo, a Genoese wool worker and small-time merchant, and Susanna Fontanarossa, his wife. He is widely thought to have been the first European to sail across the Atlantic Ocean and make landfall on the American continent. The period between the quatercentenary celebrations of Columbus ' achievements in 1892-93 and the quincentenary ones of 1992 saw great advances in Columbus scholarship. Major written sources The majority of the surviving primary sources for Columbus were written to be read by other people. Further important material may be gleaned from the few books still extant from the admiral's own library. On his first voyage to the "Indies . " Early career and the first voyage. Columbus's First Voyage. Name: Date: Christopher Columbus, the famous explorer, traveled to the Americas while searching for an all-water route to China. 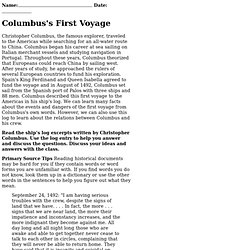 Columbus began his career at sea sailing on Italian merchant vessels and studying navigation in Portugal. Throughout these years, Columbus theorized that Europeans could reach China by sailing west. After years of study, he approached the rulers of several European countries to fund his exploration. Read the ship's log excerpts written by Christopher Columbus. Primary Source Tips Reading historical documents may be hard for you if they contain words or word forms you are unfamiliar with.