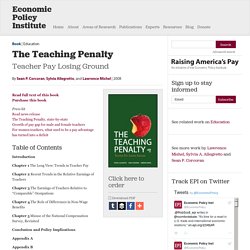 Quality of Texas teachers dropping with low pay. AUSTIN, Texas (AP) -- The quality of Texas' teachers is dropping largely because of low pay in a competitive market, an expert economist testified Tuesday in the public school finance trial. 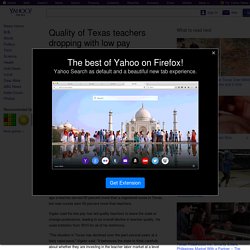 Duke University professor Jacob Vigdor said teacher salaries were 30 percent lower in Texas than for other college graduates and have fallen behind salaries paid in other Sun Belt states. He added 32 other states pay higher salaries, whereas Texas' have not kept up with inflation since 2000. Vigdor was called to testify by attorneys for wealthy schools that are among the 600 districts to sue the state over $5.4 billion in cuts to school funding. The average Texas teacher salary is $47,311, well below the national average of $54,965. The High Cost of Low Teacher Salaries. San Francisco WHEN we don’t get the results we want in our military endeavors, we don’t blame the soldiers. 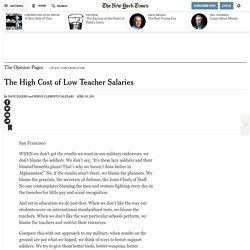 We don’t say, “It’s these lazy soldiers and their bloated benefits plans! That’s why we haven’t done better in Afghanistan!” No, if the results aren’t there, we blame the planners. We blame the generals, the secretary of defense, the Joint Chiefs of Staff. And yet in education we do just that. Compare this with our approach to our military: when results on the ground are not what we hoped, we think of ways to better support soldiers. We have a rare chance now, with many teachers near retirement, to prove we’re serious about education.

At the moment, the average teacher’s pay is on par with that of a toll taker or bartender. TFA Teachers: How Long Do They Teach? Why Do They Leave? Problem loading page. Valuing Teachers: How Much is a Good Teacher Worth? For some time, we have recognized that the academic achievement of schoolchildren in this country threatens, to borrow President Barack Obama’s words, “the U.S.’s role as an engine of scientific discovery” and ultimately its success in the global economy. 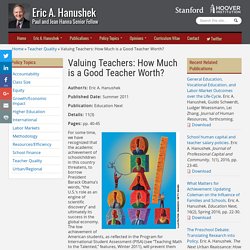 The low achievement of American students, as reflected in the Program for International Student Assessment (PISA) (see “Teaching Math to the Talented,” features, Winter 2011), will prevent them from accessing good, high-paying jobs. And, as demonstrated in another article in Education Next (see “Education and Economic Growth,” research, Spring 2008), lower achievement means slower growth in the economy.

From studying the historical relationship, we can estimate that closing just half of the performance gap with Finland, one of the top international performers in terms of student achievement, could add more than $50 trillion to our gross domestic product between 2010 and 2090. Measuring Teachers’ Impact An Alternate Thought Experiment. How to Survive on a Teacher's Salary - Finance. Could you support a family of four on a teacher's salary? 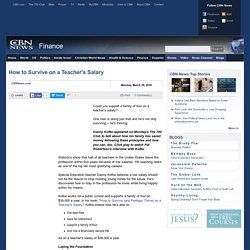 One man is doing just that and he's not only surviving -- he's thriving. Danny Kofke appeared on Monday's The 700 Club to talk about how his family has saved money following these principles and how you can, too. Click play to watch Pat Robertson's interview with Kofke. Statistics show that half of all teachers in the Unites States leave the profession within five years because of low salaries. Yet teaching ranks as one of the top ten most gratifying careers.

Special Education teacher Danny Kofke believes a low salary should not be the reason to stop molding young minds for the future. Kofke works for a public school and supports a family of four on $39,000 a year. Live debt free save for retirement support a family of four and live a financially secure life All on a teacher's salary of $39,000 a year. Laying the Foundation Smart Saving & Investing In addition to sacrifice and saving, Kofke shares smart investing tips. 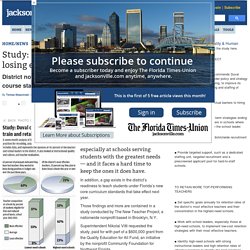 In addition, a gap exists in the district’s readiness to teach students under Florida’s new core curriculum standards that take effect next year. Those findings and more are contained in a study conducted by The New Teacher Project, a nationwide nonprofit based in Brooklyn, N.Y. Superintendent Nikolai Vitti requested the study, paid for with part of a $600,000 grant from the Quality Education for All Fund, an initiative by the nonprofit Community Foundation for Northeast Florida. The fund launched last year with the goal of helping Duval County Public Schools improve its pipeline of effective teachers and leaders, especially in high-need schools.