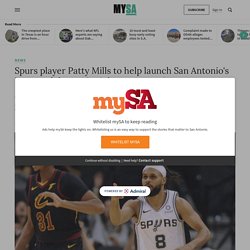 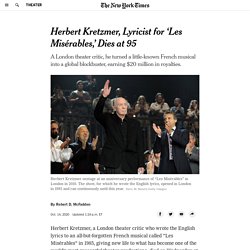 A Hollywood film version in 2012 earned more than $440 million. Showered with awards, translated into 22 languages, the musical has been performed by 100 touring companies and seen by 80 million people worldwide. Its estimated earnings are upward of $3 billion. Herbert Kretzmer was born on Oct. 5, 1925, in Kroonstad, South Africa, one of four sons of William and Tilly Kretzmer, Lithuanian Jewish immigrants who fled the pogroms of czarist Russia. 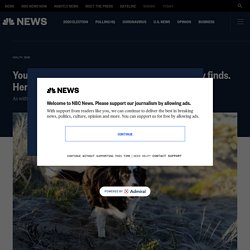 A study published Wednesday in Scientific Reports attempts to map out those changes and finds that there are some personality traits — such as attraction to novel experiences, the desire to explore and the urge to run around — that seem to change for most dogs with age. "Similar to humans, dog personality is both stable and malleable," said the study's lead author, Borbála Turcsán, a research fellow at Eötvös Loránd University in Budapest, Hungary.

"Dogs that are active and curious when young will remain active and curious when they get old, but only compared to other dogs. A dog's personality changes over time, and, on average, every dog becomes less active and less curious as they age. " At the outset, the dogs were evaluated using a series of tests known as the Vienna Dog Personality Test. Baby born at 1 pound heads home after spending 133 days in hospital. Abcnews.go. A micro preemie who was born at just 1 pound has defied the odds after doctors determined he had little chance of survival. 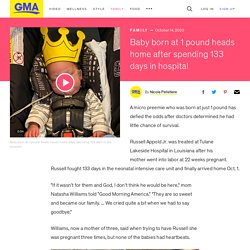 Russell Appold Jr. was treated at Tulane Lakeside Hospital in Louisiana after his mother went into labor at 22 weeks pregnant. Russell fought 133 days in the neonatal intensive care unit and finally arrived home Oct. 1. "If it wasn't for them and God, I don't think he would be here," mom Natasha Williams told "Good Morning America. " "They are so sweet and became our family. ... We cried quite a bit when we had to say goodbye. " Williams, now a mother of three, said when trying to have Russell she was pregnant three times, but none of the babies had heartbeats. Tulane Health System/Russell Appold Sr. "It was so scary when I found out we were pregnant with [Russell], we didn't want everyone to get their hopes up," Williams added. At 15 weeks pregnant, Williams' cervix started to open up. But on May 20, Williams went into preterm labor.