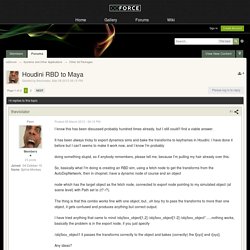 It has been always tricky to export dynamics sims and bake the transforms to keyframes in Houdini. I have done it before but I can't seems to make it work now, and I know I'm probably doing something stupid, so if anybody remembers, please tell me, because I'm pulling my hair already over this. So, basically what I'm doing is creating an RBD sim, using a fetch node to get the transforms from the AutoDopNetwork, then in chopnet, have a dynamic node of course and an object node which has the target object as the fetch node, connected to export node pointing to my simulated object (at scene level) with Path set to (t? The thing is that this combo works fine with one object, but...oh boy try to pass the transforms to more than one object, it gets confused and produces anything but correct output. 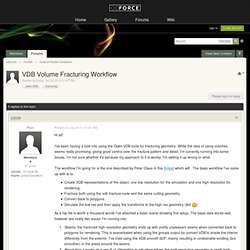 I've been having a look into using the Open VDB tools for fracturing geometry. While the idea of using volumes seems really promising, giving good control over the fracture pattern and detail, I'm currently running into some issues. I'm not sure whether it's because my approach to it is wonky, I'm setting it up wrong or what. The workflow I'm going for is the one described by Peter Claus in this thread which will . The basic workflow I've come up with is to: Create VDB representations of the object, one low resolution for the simulation and one high resolution for rendering.Fracture both using the vdb fracture node and the same cutting geometry.Convert back to polygons.Simulate the low res and then apply the transforms to the high res geometry (tbd )As a hip file is worth a thousand words I've attached a basic scene showing this setup.

I'd be grateful if anyone could point me in the right direction with regards to fixing the seams. Thanks, Julian Attached Thumbnails. Bullet or RBD for fracturing/crumbling effects? Hey Peter, wow, annother great post that gets my head spinning! 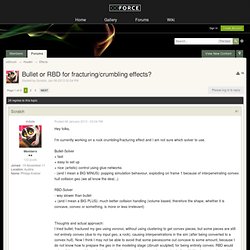 1) A/B and 4)- lowres geo -> sim -> position data to highres geoI get the overall idea of what you say - interesting and convinient approach! Could you maybe explain this process of siming lowres pieces and tranfering their position data to the highres pieces using that lookup id a bit more detailed? (Maybe a quick, simple example file if that saves you from a lot of writing?) The concept makes a lot of sense, but at the moment I lack the knowledge to tell it to Houdini. 4) I can understand that it must be possible to transfere position data for a matching number of pieces (with the described aproach above), but for more pieces than you simulated? Houdini - Impact deformation for RBDs. Destruction &Fracture: Houdini OR Max+Volumebreaker&

Pclaes : TP does have constraints. 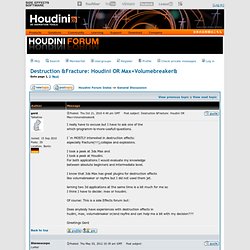 You can create them, place them, and break them as needed. There are quite a few different types of 'joints': Fixed,Spherical,Cylindrical, Ball,Hinge,Spring,Wobble,Slider Setting them up is extremely easy and flexible. You can do it procedurally based on the particles or you can even place them by hand in a rig, and import the rig into TP. We used TP for 2012 's LA Limo Sequence: and it was also recently used on Final Destination 5: Manu up there actually worked on FD5, I only did some initial RnD for it.

Joints were heavily used in both, although they were still a little 'young' to be used to their fullest potential on 2012. TP does only have voronoi shattering built in, but you can use the cutting tools in max, or rayfire (which offers good scripted functions that use the build in cutting tools) to generate non-voronoi shapes to start with. Quick edit: in terms of pretty much everything else I'd say go with Houdini. _________________Ian Farnsworth. Realistic Dynamic Fracturing with Bullet. Bullet - dynamic constraint creation. Edge Displacement on fractured pieces.