This article reports the findings of Amnesty International, an important organization that identifies and investigates war crimes wherever they may occur.

This report describes the egregious tactics used by the allied Russians and Syrian forces to beat Syrian people into submission to their geopolitical goals. The Russians and Syrians used terrorizing tactics enforced by mass murder of whole families. Amnesty International has highlighted several war crimes committed by these two forces including the extensive targeting of civilian infrastructure. However, the tactics were a unifying factor for the rebels. Although the rebel groups have lost the civil war, their ideas of living with greater liberty have remained unbroken.

As Israel's number one ally, the U.S has stood with Israel against the ICC (International Criminal Court) on the matter of war crimes. Israel denies it has committed any such crimes and this article is written in a way to appear that any such charges are against Hamas and other armed Palestinian group. However, from other research, it is clear that the ICC's major concerns regarding possible war crimes include the withholding of critical water supplies and the bombing of civilian infrastructure (bridges and roads, for example) that are ultimately necessary to sustain life as they serve as access points for food and medicine. This article is clearly skewed to support Israel's position.

This article describes the mass graves of Rwanda and Cambodia which are vast pits containing the bodies of innocent human beings who were murdered. While the world has largely moved on from the slaughter that took place in these countries, the role of journalists, such as the authors of this article from the New York TImes, is critical to remind us that these war-time atrocities happened, others may be also happening right now, and will happen again. Articles such as this help us to remember to be vigilant against the forces that commit such crimes and to raise concern when new atrocities are reported.

During the "war on terror" waged in Afghanistan, many private military corporations were allowed to "set up shop" in the war torn country in an attempt to turn a profit. Companies such as Blackwater, contracted by the U.S DOD (Department of Defense), were responsible for multiple atrocities committed against prisoners of war, such as torture and mutilation. Many of their actions constitute war crimes but it is unlikely that their will ever be held accountable in any meaningful way.

Two Syrian Defectors to go on Trial in Germany for War Crimes, The Guardian, April 22nd, 2020 :

This article tells the tragic story of Anwar Raslan and Eyad al-Gharib, two Syrian men who thought they had escaped Syria’s civil war when they fled to Germany and applied for political asylum. But unlike most of those seeking refuge, they had once been part of the state’s machinery of oppression. When the conflict began, both men were members of the notoriously vicious intelligence service, which arrested, tortured and killed protesters and opposition figures. But both defected from the regime, and they seemed to have thought that would protect them from their past. 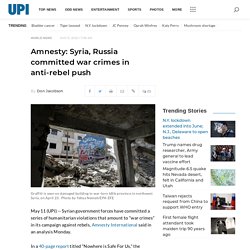 In a 40-page report titled "Nowhere is Safe For Us," the watchdog said Russian military and Syrian forces loyal to President Bashar al-Assad carried out a "new wave of horrors" against civilians in the opposition-held northwestern part of the country from May 2019 through March. The human rights group said it documented 18 attacks on medical facilities and schools in Idlib, northwestern Hama and western Aleppo provinces -- mostly via airstrikes carried out by Russian and Syrian forces. Syrian fighters were blamed in three ground attacks and two barrel bomb attacks targeting civilians. In one incident highlighted in the report, 11 civilians including a doctor and at least 30 civilians were injured in a series of airstrikes near al-Shami hospital in Ariha in January.

Pompeo warns ICC of 'consequences' for potential war crimes probe of Israel. US Secretary of State Mike Pompeo on Friday warned the International Criminal Court against asserting jurisdiction over Israel, saying the United States will “exact consequences” for any “illegitimate” investigations. 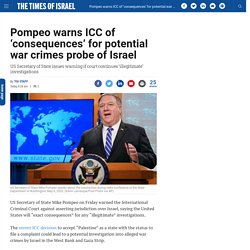 The recent ICC decision to accept “Palestine” as a state with the status to file a complaint could lead to a potential investigation into alleged war crimes by Israel in the West Bank and Gaza Strip. “The International Criminal Court is a political body, not a judicial institution. This unfortunate reality has been confirmed yet again by the ICC Prosecutor’s attempt to assert jurisdiction over Israel, which like the United States, is not a party to the Rome Statute that created the Court,” read Pompeo’s statement. Get The Times of Israel's Daily Edition by email and never miss our top stories Free Sign Up “The United States reiterates its longstanding objection to any illegitimate ICC investigations.

It is now up to a so-called pre-trial chamber to rule on the matter. War Crimes, Genocide and Crimes Against Humanity. War Crimes News and Editorial Articles. War crimes.