ADHD and the relentless internet – is there a connection? The internet might make you feel hyperactive, but do you really have attention deficit hyperactivity disorder? 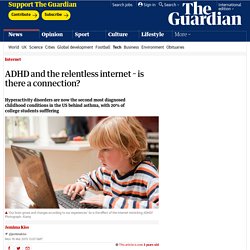 Michael Pietrus PsyD, coordinator of the ADHD assessment protocol at the University of Chicago, explains how the internet encourages behaviour that at least mimics ADHD, and can exacerbate the condition in people who have it already. Pietrus looks after many students at the college who feel the effects of academic and social pressure. In the US, 11% of children between four and 17 now have a diagnosis of ADHD and the rates have been going up by 5% every year from 2003 to 2011. It’s now the most commonly diagnosed condition for children in the US after asthma. Twenty per cent of the US college population now have ADHD, which appears as hyperactivity, inattention and impulsivity, and are at higher risk of substance abuse and self medication, depression and a host of other consequent conditions. No one can explain the increase in ADHD in the US, Pietrus said. Internet Addiction, Sleep Deprivation, or ADHD?

With the diagnosis of ADHD on the rise in American teenagers, there is a risk of mislabeling teens with ADHD when the cause of their inattentiveness and falling grades may be related to something else entirely—like anxiety, family issues, or their media-infused lifestyle. 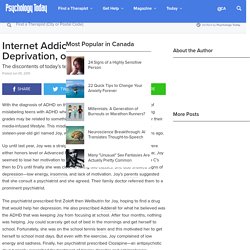 This misdiagnosing was especially striking to me with a sixteen-year-old girl named Joy, whose family came to consult me a few months ago. Up until last year, Joy was a straight A student. All of her high school classes were either honors level or Advanced Placement (AP). But in the fall of her junior year, Joy seemed to lose her motivation to do well in school. Her grades began to slip to C’s then to D’s until finally she was close to failing two classes. Article continues after advertisement The psychiatrist prescribed first Zoloft then Wellbutrin for Joy, hoping to find a drug that would help her depression. Mobile phone addiction? It’s time to take back control. As a tech writer who has written regularly about apps, I’m well aware of the addictive nature of smartphones. It was during a 2am panic attack after waking up, reaching for my smartphone and reading a tweetstorm about the latest Donald Trump controversy that I realised I may have a problem.

That, and the fact that even my 10-year-old son had started telling me to put my phone down when he caught me not paying attention. I’m not alone. When Deloitte surveyed 4,150 British adults in 2017 about their mobile habits, 38% said they thought they were using their smartphone too much. Among 16- to 24-year-olds, that rose to more than half. “It’s not necessarily the top thing when my clients come in, but it’s often in the mix, tied in with anxiety or insomnia or relationship issues,” says psychotherapist Hilda Burke, a spokesperson for National Unplugging Day in 2016 and 2017. Kuh is trying to make amends: his latest app is called Mute, and launched for iPhone this month (free). Powell agrees. Mobile addiction growing at an alarming rate. Imtmphoto | iStock/360 | Getty Images Mobile addicts are multiplying at an alarming rate, as an increasing number of teens, college students and middle-age parents fall victim to the problem. 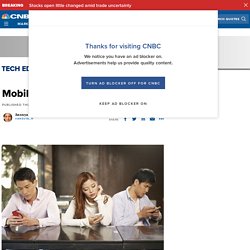 A “mobile addict” is defined as a user that launches apps more than 60 times a day, according to mobile analytics firm Flurry, six times more than the average user. The number of mobile addicts has grown by 123 percent over the past year, according to Flurry, which looks at data from 500,000 apps across 1.3 billion mobile devices. As of March 2014, there were 176 million addicts, up from 79 million in the same period last year. Females accounted for 52 percent of addicts, while the rest were males. It comes as no surprise that teens and college students are part of this group as their youth has coincided with the mobile revolution. Read More5 ways to kick your 24/7 tech addiction “The same is true for college students who are noticeably avid users of messaging and gaming apps.

How to Overcome FOMO: Fear of Missing Out. FOMO Addiction: The Fear of Missing Out. The fear of missing out (FOMO) has become pervasive in society. Teens and adults text while driving, because the possibility of a social connection is more important than their own lives (and the lives of others). They interrupt one call to take another, even when they don’t know who’s on the other line (but to be honest, we’ve been doing this for years before caller ID). They check their Twitter stream while on a date, because something more interesting or entertaining just might be happening. It’s not “interruption,” they claim, it’s connection. But wait a minute… it’s not really “connection” either.

We are so connected with one another through our Twitter streams, Instagram updates, and Foursquare check-ins, through our Facebook and LinkedIn updates, that we can’t just be alone anymore. The Fear of Missing Out Connected to this fear of missing out on something better that’s going on without you are these fake personas we promote on websites like Facebook.