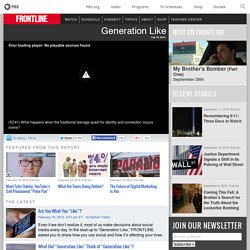 Generation Z (or is that Edge?) shows a fluid sense of style. Watch out, millennials: There's a new generation in town, and the first wave is edging toward 20. 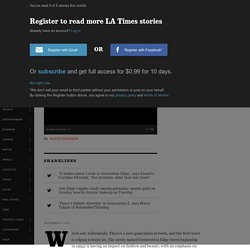 The newly named Generation Edge (born beginning in 1995) is having an impact on fashion and beauty, with an emphasis on individual style and an embrace of technology and consumer empowerment. The precocious confidence of singer Lorde (who turns 18 Friday) and actress Chloe Grace Moretz (17), the experimentation of Willow "Whip My Hair" Smith (14), the red carpet poise of actress Elle Fanning (16), the diversity — ethnically and in terms of talent — of singer/actress/dancer Zendaya (18) and the media savvy of YouTube style guru Bethany Mota (19) are all examples of a generation that's doing things differently.

Why Edge? This generation is also referred to as Generation Z, but the strategic research and brand consultancy company the Sound has instead dubbed them, more imaginatively, Generation Edge. Here's things to know about Gen Edge and how they are affecting fashion and beauty: Lorde again. CM 502- PR in the Digital World. Consumers see the beauty world through screens – marketers take note! I am not revealing anything outrageous by saying that the internet has changed the way companies market products, but it needs to be harnessed and taken on board by cosmetics firms, as advertising rules have changed and consumers are searching for much more product and brand information before making a beauty purchase. 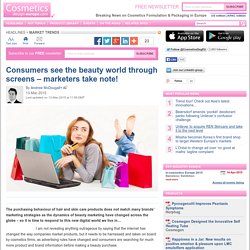 Research from Diagonal Reports shows that for consumers the internet is now primary, particularly regarding reach, as it is used by most consumers and is the place to go for beauty news, information, and opinion. Social media trend report: The Sharded Self - Focus PR. Last week we were delighted to attend LS:N Global’s AW14 Trend Briefing – The Me-conomy – at the British Museum; a fantastic afternoon which explored three of the latest macrotrends, each pivotal to the digital age. 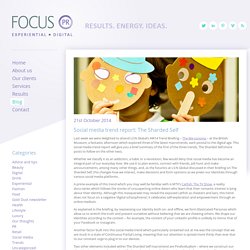 This social media trend report will give you a brief summary of the first of the three trends, The Sharded Self (more posts to follow on the other two). Whether we classify it as an addiction, a habit or a revolution, few would deny that social media has become an integral part of our everyday lives. Trend: The Sharded Self. We've partnered with global trend forecasters, The Future Laboratory, to bring you four of the most exciting macro trends emerging in design and advertising right now. 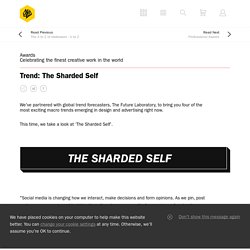 THE SHARDED SELF. During last weeks LS:N Trend Briefing at the British Museum, we were introduced to the phenomena of ‘The Sharded Self’. 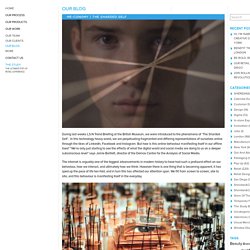 In this technology heavy world, we are perpetuating fragmented and differing representations of ourselves online through the likes of LinkedIn, Facebook and Instagram. But how is this online behaviour manifesting itself in our offline lives?

Some eye-opening findings from our big new poll on millennials. Young voters seem excited about going to the polls for the all-important 2016 presidential election. 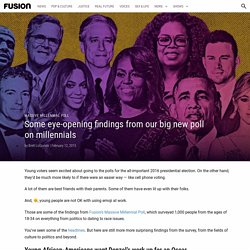 On the other hand, they’d be much more likely to if there were an easier way — like cell phone voting. A lot of them are best friends with their parents. Some of them have even lit up with their folks. And, , young people are not OK with using emoji at work. Those are some of the findings from Fusion’s Massive Millennial Poll, which surveyed 1,000 people from the ages of 18-34 on everything from politics to dating to race issues. You’ve seen some of the headlines. Young African-Americans want Denzel’s work up for an Oscar. “The Equalizer” got some early Oscar buzz, but failed to earn a nomination. Who’d make the best comedian president? Professional Beauty - New research shows demand for personalised skincare in over 45s market. More than a fifth of women over 45 want customised skincare, according to new research from analyst firm Canadean. 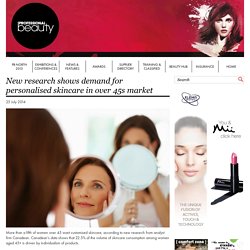 Canadean’s data shows that 22.5% of the volume of skincare consumption among women aged 45+ is driven by individualism of products. The study found that women in that market have difficulty selecting products from the wide variety of moisturisers, serums and other skincare products in the market. Joanne Hardman, analyst at Canadean, says: “Women develop their skincare routine in their 20’s and stick with it.