iXR Labs provides highly immersive, interactive and insightful virtual reality experiences for higher education that helps you keep up with the rapidly changing pace of industry and technology. iXR Labs is trusted by leading education companies in the industry. We at iXR Labs offer virtual reality labs for engineering, science and medical colleges that enhance retention, comprehension, research mindset, and engagement 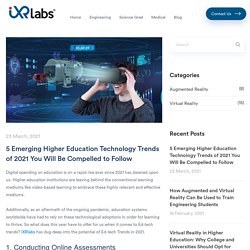 Higher education institutions are leaving behind the conventional learning mediums like video-based learning to embrace these highly relevant and effective mediums. Additionally, as an aftermath of the ongoing pandemic, education systems worldwide have had to rely on these technological adoptions in order for learning to thrive. So what does this year have to offer for us when it comes to Ed-tech trends? iXRlabs has dug deep into the potential of Ed-tech Trends in 2021. 1. With most people worldwide resigning to their fate of staying indoors, various companies have come forth with platforms to conduct examinations online. Many algorithms have been developed, especially with aid of Artificial Intelligence in order to ensure malpractices by students are prohibited. 2. Podcasts are nothing new. Virtual Reality in Higher Education: Why College and Universities Should Opt for VR Labs. 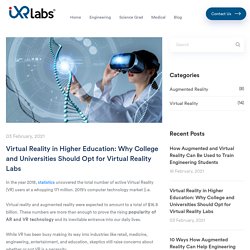 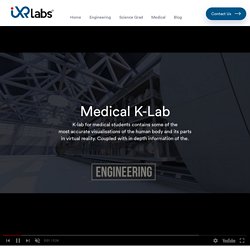 K-Lab VR for medical is developed after in depth research and through collaborations with some of India’s leading institutes in medical sciences. K-Lab VR for medical contains some of the most accurate visualisations in 3D of various human parts. These detailed visualisations help a student accurately understand the internal workings of a human body. VR for Higher Education - Virtual Reality Labs for Colleges. How AR and VR Can Be Used to Train Engineering Students. How Augmented and Virtual Reality Can Be Used to Train Engineering Students Computer technologies like Augmented Reality (AR), Mixed Reality (MR), and Virtual Reality (VR) have taken over a significant portion of industries, segmented under the tertiary sector. 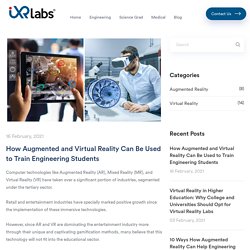 Retail and entertainment industries have specially marked positive growth since the implementation of these immersive technologies. However, since AR and VR are dominating the entertainment industry more through their unique and captivating gamification methods, many believe that this technology will not fit into the educational sector. A common belief is that immersive technologies may, sometimes, be far too graphic or maybe extremely distracting for students. Parents compare VR processes in video games and cannot imagine the possible benefits that these technologies can provide to students. However, you later see people accepting the technology once they realize how advantageous technology is. 1. 2. Virtual Reality in Higher Education: Why College and Universities Should Opt for VR Labs. 10 Ways How Augmented Reality Can Help Engineering Students. 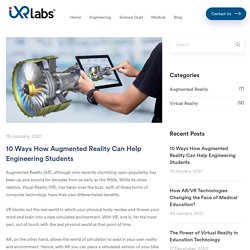 While its close relative, Visual Reality (VR), has taken over the buzz, both of these forms of computer technology have their own differentiated benefits. VR blocks out the real world in which your physical body resides and throws your mind and brain into a new simulated environment. With VR, one is, for the most part, out of touch with the real physical world at that point of time. 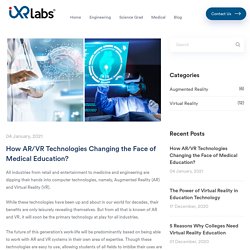 All industries from retail and entertainment to medicine and engineering are dipping their hands into computer technologies, namely, Augmented Reality (AR) and Virtual Reality (VR). While these technologies have been up and about in our world for decades, their benefits are only leisurely revealing themselves. But from all that is known of AR and VR, it will soon be the primary technology at play for all industries. The future of this generation’s work-life will be predominantly based on being able to work with AR and VR systems in their own area of expertise. Though these technologies are easy to use, allowing students of all fields to imbibe their uses are important. Augmented Reality for Education - The Future of Education Industry. Augmented Reality for Education – The Future of Education Industry Generation Alpha has taken over and the old education system is extinct! 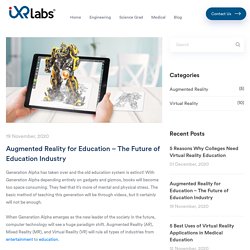 With Generation Alpha depending entirely on gadgets and gizmos, books will become too space consuming. They feel that it’s more of mental and physical stress. The basic method of teaching this generation will be through videos, but it certainly will not be enough. When Generation Alpha emerges as the new leader of the society in the future, computer technology will see a huge paradigm shift. The entertainment industry has already experimented with this technology and experienced captivating results. However, children forming Generation Alpha are already in the process of learning and going to school. 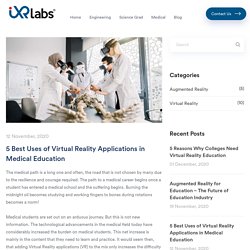 The path to a medical career begins once a student has entered a medical school and the suffering begins. Burning the midnight oil becomes studying and working fingers to bones during rotations becomes a norm! Medical students are set out on an arduous journey. But this is not new information. VR is not a novel technology that humanity has only recently stumbled upon. VR lightens workload and increases efficiency, instead of one having to worry about catching up with this new technology. Use of Immersive Technology in College Classrooms.

Use of Immersive Technology in College Classrooms Technological innovations like Virtual Reality (VR) have been introduced to almost all industries that are part of the tertiary sector. 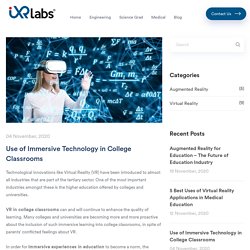 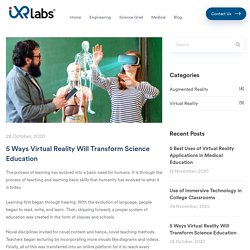 It is through the process of teaching and learning basic skills that humanity has evolved to what it is today. Learning first began through hearing. With the evolution of language, people began to read, write, and learn. Then, skipping forward, a proper system of education was created in the form of classes and schools. Novel disciplines invited for novel content and hence, novel teaching methods. From this, it is evident that humans will always try to evolve the system of education, based on the latest technology. Why Augmented Reality is Becoming Important in the Education Industry. Why Augmented Reality is Becoming Important in the Education Industry Augmented Reality or AR uses computer technology and provides users with a uniquely immersive experience. Many industries like education today, especially those part of the tertiary sector, have experienced the benefits of AR.

Since autism is a spectrum disorder, the strengths and challenges vary from one individual to the other. Autism spectrum disorder impacts the nervous system and affects the in-general cognitive, emotional, social, and physical wellbeing of the person affected. For example, few individuals with autism might seek extensive support in their day to day activity, whereas others, may essentially sustain on their own. The most common signs include a struggle with communication, obsessive interests, social interactions, and tedious behaviors. Nevertheless, the symptoms significantly reduce, if effectively detected at early stages. 8 Benefits of Virtual Reality Labs for Higher Education - Ixrlabs. 8 Benefits of Virtual Reality Labs for Higher Education The most popular computer technology that has taken over a majority of the technology columns is Visual Reality (VR).

VR’s siblings, Augmented Reality (AR) and Mixed Reality (MR), have become generic in comparison. While so far VR has focussed on enhancing the entertainment department. It is slowly spreading to all kinds of workplaces and industries with its translocating and enchanting immersion specialties. There is hardly any need to hype the technology to those who have already worn a VR headset once and experienced being in the galaxy or under the sea! However, if you have seen only its entertainment benefits or you are yet to feel the pleasure of experiencing life in VR, this blog is for you! VR is an industry that, as aforementioned, will be the primary technology used by all workplaces in the near future.

But now, VR technologies are embedded into higher education and many colleges and universities are now using virtual reality to enhance the future education. The overall climate of future education has been changing rapidly due to the advancement in the educational technologies. VR Labs for Engineering Educations. Engineering KLab-VR brings to you the power of practical learning tools in a single virtual reality-based console. We have the most interactive immersive and insightful learning experiences packed into this VR console. Engineering VR covers 1000+ engineering concepts, combined with insightful content and in-depth assessment that aid in improving the learning outcomes.