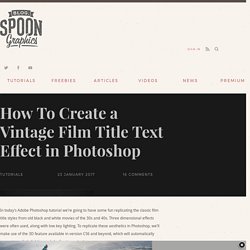 Three dimensional effects were often used, along with low key lighting. To replicate these aesthetics in Photoshop, we’ll make use of the 3D feature available in version CS6 and beyond, which will automatically generate realistic lighting and shading to our text. The artwork I’ll be creating for this tutorial is based on the fictional movie title “The Phantom”. Most of the hard work is done by Photoshop’s 3D functionality. Just some configuration of the settings is all that’s required to produce the three dimensional effects and the chamfered text face, along with the associated lighting and shadows. 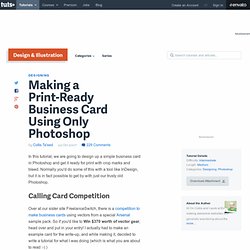 Normally you'd do some of this with a tool like InDesign, but it is in fact possible to get by with just our trusty old Photoshop. Calling Card Competition Over at our sister site FreelanceSwitch, there is a competition to make business cards using vectors from a special Arsenal sample pack. So if you'd like to Win $370 worth of vector gear, head over and put in your entry! I actually had to make an example card for the write-up, and while making it, decided to write a tutorial for what I was doing (which is what you are about to read :-) ) Step 1 Ok, so the very first thing we need to do is create a New Document.

When sending things off to printers however, you need to add a sort of border around the image called a Bleed. Because of a quirk of Photoshop (which you'll see later) we're going to use a value of 3mm. Step 2 Step 3 Step 4 Step 5 Step 6 Step 7 Step 8. 15 Fresh and Quality Text Effect Tutorials. Text effect tutorials have always been popular amongst Photoshop users. 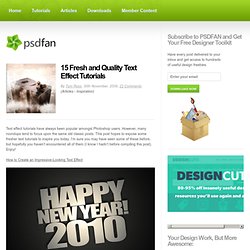 However, many roundups tend to focus upon the same old classic posts. This post hopes to expose some fresher text tutorials to inspire you today. I’m sure you may have seen some of these before, but hopefully you haven’t encountered all of them (I know I hadn’t before compiling this post). Enjoy! Photoshop 101: How To Create and Use Clipping Masks. A clipping mask is a quick way to create masked effects that show and hide parts of images or photos. 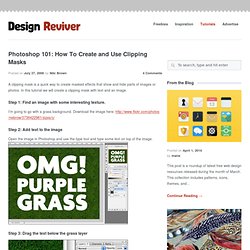 In this tutorial we will create a clipping mask with text and an image. Step 1: Find an image with some interesting texture. I’m going to go with a grass background. Download the image here: Step 2: Add text to the image. How to make a see-through to image text effect in Photoshop. This is a really simple trick to creating an ordinary photograph with some text into an engaging image. 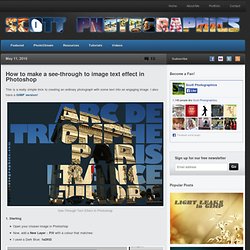 Create Clipping Mask on Photo 4. How to Create a Steampunk Type Treatment in Photoshop. I don’t know what it is about steampunk style that’s so appealing. 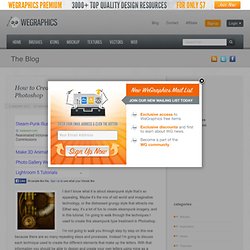 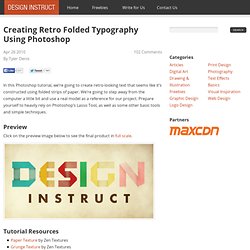 We’re going to step away from the computer a little bit and use a real model as a reference for our project. Prepare yourself to heavily rely on Photoshop’s Lasso Tool, as well as some other basic tools and simple techniques. Preview Click on the preview image below to see the final product in full scale. Tutorial Resources Paper Texture by Zen TexturesGrunge Texture by Zen Textures Step 1: Working away from the computer To create our folded text, we first want to see in real-life how folded strips of paper would look. So first, take a piece of regular 8.5” x 11” paper and cut it into strips using scissors or a box cutter. Start folding the strips to the letters that we want. Now we can see exactly how the folds will look for the letters we’re using. Step 2: Setting up the document Step 3: Adding color Next, we’re going to change the color of our text. 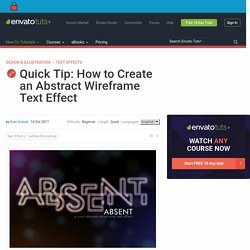 Let's get started! Let's start by creating a new document which is 900 px wide and and 600 px high at a resolution of 300 pixels/inch. Make sure the Color Mode is set to RGB. Creating a Typographic Wallpaper. After writing my previous tutorial here about Creating a Zune in Photoshop, several viewers asked if I’d share how I created the wallpaper graphic. 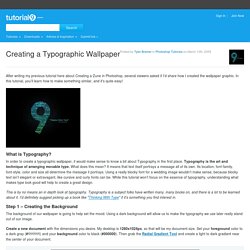 In this tutorial, you’ll learn how to make something similar, and it’s quite easy! What is Typography? In order to create a typographic wallpaper, it would make sense to know a bit about Typography in the first place. Typography is the art and technique of arranging movable type. What does this mean? This is by no means an in depth look at typography. Step 1 – Creating the Background. Create a Crisp Metallic Text Effect in Photoshop. In this quick tip tutorial, we will explain how to create a crisp, metallic text effect using just a couple of layer styles in Photoshop. 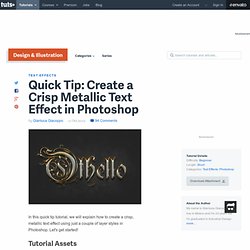 Let's get started! Tutorial Assets. Playing with Timeline in Photoshop CS6. Photoshop CS6 has some great features, one of them is the new timeline for basic animations and this time Photoshop gets a little bit of the After Effects taste. As the idea of the blog is to play with these tools, we decided to come up with something for this new feature. So in this tutorial we will show you a simple animation using the new timeline and some light effect tricks. The whole process is super simple and won't take you more than 20 minutes. Step 1 Open Photoshop CS6 and create a new document.

Create a Picture with Words. I love Photoshop techniques that offer all kinds of possibilities for experimentation—and the following tutorial is a perfect example of one of those techniques. In this issue, we’re going to take a portrait and replace the person’s image with text (think 2009 Grammy posters). Pick a portrait that offers good contrast—a photo that’s very dramatic and dark probably won’t work as well. I’ve had the best success with straight-on head and shoulder shots, but again, feel free to experiment with all types of photos.

For the best results, choose a photo that has a light background (or select the background around the person and make it lighter). Create a new document (File>New) in a size that’s smaller than your photo: the specifics don’t really matter.