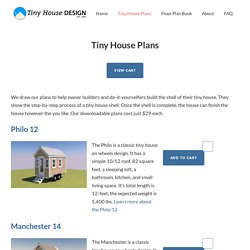 They show the step-by-step process of a tiny house shell. Once the shell is complete, the house can finish the house however the you like. Our downloadable plans cost just $29 each. Philo 12. Free Wood Cabin Plans - Free step by step shed plans. One of the nicest things about a cottage is that it becomes a place for friends and family to gather and share memories. 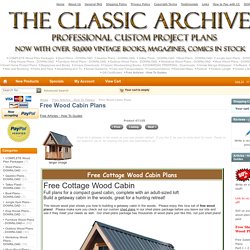 But the cherished kind of memory probably doesn’t include the sound of Uncle Bob’s snoring, or having to step over half a dozen nieces and nephews on your way to a midnight snack. With a bunkie, you can invite overnight guests and still have some privacy at bedtime. And our Bunkie not only makes an ideal guest cabin for cottage overflow, it also doubles as a quiet retreat for those days when even two’s a crowd (see “Layout Options For Main Floor,” below).

When we designed this structure, we envisioned it as suitable accommodation for a couple of adults and three to four kids. A futon on the main level would work well for a bed for the big folks, while cots or an inflatable bed in the loft would be suitable for the little ones. Our local building code requires a building permit for any structure with floor space greater than 108 sq. ft. 1. Ultimate Roundup of The Best DIY Tiny House Plans - Tiny House for UsTiny House for Us. Small & tiny home ideas — Plans & Resources. Tiny House Chat :: Ryan Mitchell & Macy Millerthe r(E)vo convo :: Andrew Odom & Laura Lavoie TUMBLR FAMOUS :: Did you know that the most popular tiny houses featured on s&thi actually have resources for us to build them? Yup. I am pretty darn thrilled about it too…. 8×20 Solar House Update… Free Plans Nearly Complete. For the past two weeks I’ve been test driving Google SketchUp Pro and have come to a simple conclusion. 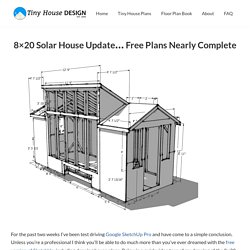 Unless you’re a professional I think you’ll be able to do much more than you’ve ever dreamed with the free version of SketchUp, including drawing house plans. Below is a quick video tour of my drawing of the 8×20 Solar House. It’s not quite finished but I wanted to give you a progress report. The only advantage I can see with the pro version is that you can create your own unique visual styles and make build presentations using Google Layout.

But when I publish the free house plans for this house I’ll just use the free version and I think you’ll be able to see how easily nearly perfect 2D drawings can be exported too. Tiny house size. I was just wondering… how much living space do most people need? 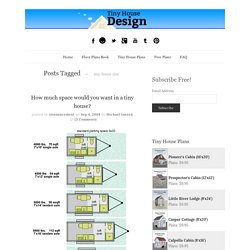 If you’re on this site I have to assume you’ve considered living, working, owning, renting, visiting, or vacationing in a tiny house. You’ve probably also looked carefully at all of Jay Shafer’s Tumbleweed Houses which very nicely document the possibilities of such tiny spaces. I drew this quick picture to try an illustrate the difference between common tiny house sizes based on standard trailer sizes. Pins from tinyhousedesign.com on Pinterest. 440 Sq. Ft. Tiny Backyard Cottage Plans. On January 13, 2015 Shawn Dehner over at The Small House Catalog released this 440 sq. ft. backyard cottage design (and plans). 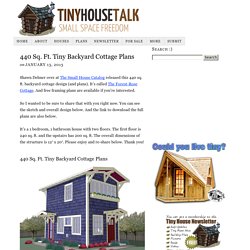 It’s called The Forest-Rose Cottage. And free framing plans are available if you’re interested. So I wanted to be sure to share that with you right now. You can see the sketch and overall design below. The Tiny Project: Modern Tiny House Plans. On June 4, 2014 Remember Alek’s amazing DIY tiny house on wheels that I showed you a while back? 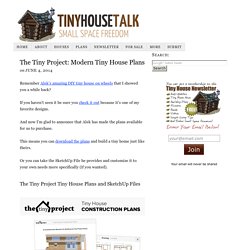 If you haven’t seen it be sure you check it out because it’s one of my favorite designs. And now I’m glad to announce that Alek has made the plans available for us to purchase. This means you can download the plans and build a tiny home just like theirs. Or you can take the SketchUp File he provides and customize it to your own needs more specifically (if you wanted). Plans. Design a More Self-Reliant & Resilient Life. Free Tiny House Plans by THE small HOUSE CATALOG. Amazing 100 Sq. Ft. Tiny House on Wheels Built by Architecture Grads. I wanted to show you this tiny house on a trailer that’s in West Vancouver, British Columbia, Canada. 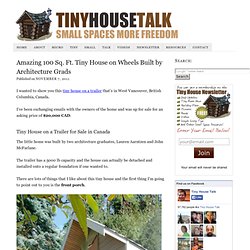 I’ve been exchanging emails with the owners of the home and was up for sale for an asking price of $20,000 CAD. The little home was built by two architecture graduates, Lauren Aarntzen and John McFarlane. The trailer has a 5000 lb capacity and the house can actually be detached and installed onto a regular foundation if one wanted to. There are lots of things that I like about this tiny house and the first thing I’m going to point out to you is the front porch. Photos Courtesy of Lauren Aarntzen and John McFarlane. DIY: Tiny House / Camper / Trolly / Cab… Pin by Mel on DIY: Tiny House / Camper / Trolly / Caboose Trailer.

Pin by Mel on DIY: Tiny House / Camper / Trolly / Caboose Trailer. Tiny Free House. Last weekend I got dusty and sun burned testing a bunch of theories about how best to put this tiny house together. 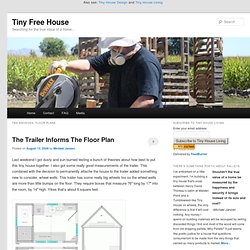 I also got some really good measurements of the trailer. This combined with the decision to permanently attache the house to the trailer added something new to consider, wheel wells. This trailer has some really big wheels too so the wheel wells are more than little bumps on the floor. They require boxes that measure 76″ long by 17″ into the room, by 14″ high. Yikes that’s about 9 square feet. At first I was a little concerned and then started laying things out and realized that the wheel wells pointed me in the right direction. The loft sticks out a bit much so my only concern is that this might feel smaller than it is. Plans et croquis - La tiny house. Baupläne für Minihäuser. Online gibt es viele Anbieter von Bauplänen für Minihäuser, Ferienhäuser und Gartenhäuser. 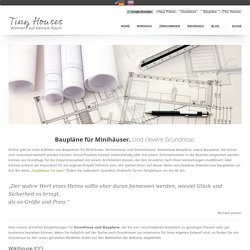 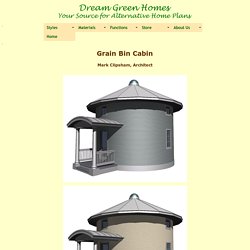 It also has the potential to provide as many as 12 "berths" for use as a hunting cabin or such. Each berth could have its indiviual heat or A/C duct for greater efficiency. The basis of the design components is to put a grain bin inside a grain bin and insulate the space between them with foam. Free Wood Cabin Plans - Free step by step shed plans. Joseph Sandy » Tiny House Design – 120 sq. ft. I wanted to share a 120 sq. ft. tiny house design I did a few years back. I centered the design around a 6′ sliding glass door. This was to be the entrance and the main focus of the plan. I also was striving for a design that felt spacious, so all of the elements surround an open space. A pull out couch to the left, kitchen and desk to right, and a 3′ deep bathroom and storage at the rear. The sleeping loft is cantilevered off the back so It could fit a queen size bed. The use of two opposing shed roofs was for several reasons. Joseph Sandy » 350 sq. ft. House – Plan Set. The Plan Set for the 350 sq. ft.

Usonian inspired house is finished, and available for you to download. The project page is here. Included are elevations, roof plan, floor plan, and alternative floor plan. The plan set is simple but should give you all of the information that you would need. It was produced using SketchUp. Free Small Cabin Plans that will Knock your Socks Off. Well, I guess I’ll toss my 2 cents in here now. I’ve looked at these plans over and over and I keep thinking: Why reinvent the wheel? Why not build the 384′ cabin, but leave out the kitchen area and instead put in a small woodstove?

Next, pour a pad right beside your cabin and park your trailer on it. Build a barn around it; with siding, roof, and windows to match the exterior of your cabin. Jonathan Marcoux Squared Eco House - Simple Solar Homesteading. What is special about this tiny house is its ability to harvest water, food, and power in a mere 185 sq. ft. with a budget of around 10,000$. This is a square tiny house 12’3”x12’3” featuring a water harvesting system, solar and woodstove water heater, two 20 square feet solar panels and an integrated aquaponics system for plant and fish harvesting.

Materials and Construction Construction consists of regular building material with 2”x4” structure and conventional or alternative insulation. It could, however, also be built using wood-stacking or hay-ball method which would increase the footprint to about 196-200 sq. ft. because of the thicker walls.

An aluminium rooftop provides a surface for rainwater harvesting, solar panels array, and a sun water heater. Heating and Cooling. Misty Robinson House-On-Wheels - Simple Solar Homesteading. This 8'Wx20'Lx13.5'H tiny house can sleep up to four people. The loft over the porch can be used as sleeping or storage space and the sofa folds out into a bed. The bathroom has a composting toilet and a full size shower.

It can fold up next to the house for transport, which provides extra protection to the large doors and windows on that face of the house. The roof is made of metal and the siding is made of corrugated metal and reclaimed wood. When you enter the house, the living room is to the right. You can immediately see a series of 1'x1' boxes which serve as both stairs to the sleeping loft as well as storage. Lauren O'Mally Living Tiny Home - Simple Solar Homesteading.

Shockingly Simple Electrical Electrical for tiny houses Ebook. Learn More. Minim Micro Homes. Small & tiny home ideas — Plans & Resources. Tinier Living - Tiny Home Builders. Tiny Egg House – The Exbury Egg. Artist Stephen Turner seems to have been incubating a novel solution for eco-living. That idea has now hatched into a full-size tiny live/work space that floats. All egg jokes aside, this is an incredible work of craftsmanship and fine woodworking. The fact that it is sea worthy (well, at least river worthy) amazes me… but then again it’s built like a boat. “The Exbury Egg is a trans-disciplinary project drawing on art and architecture as well as technology and the sciences to transcend individual specialism and work toward a further engagement of my visual art practice with contemporary ecological thinking.I will seek to creatively map the inter-connection of life from the smallest invertebrates to the largest mammals and between fauna and changing flora during the course of four complete seasons.