Urban Movement. PROJECT DRAWDOWN - If it is happening, it is possible. Special Announcement About Important Things! 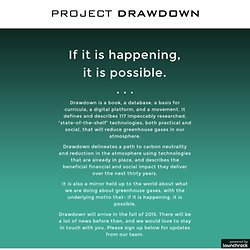 Drawdown is a book, a database, a basis for curricula, a digital platform, and a movement. It defines and describes 117 impeccably researched, “state-of-the-shelf” technologies, both practical and social, that will reduce greenhouse gases in our atmosphere. Drawdown delineates a path to carbon neutrality and reduction in the atmosphere using technologies that are already in place, and describes the beneficial financial and social impact they deliver over the next thirty years.

It is also a mirror held up to the world about what we are doing about greenhouse gases, with the underlying motto that- if it is happening, it is possible. Drawdown will arrive in the fall of 2015. You are now on our list. Based on this sign up, we think you'll love... This is a sample text, written as a placeholder. 60 characters. Plastic bottle light "Plastic bottle 60-watt light" -Panasonic ecoideasnet.

Liter of Light. Liter of Light is a global open source movement with the aim to provide an ecologically and economically sustainable source of light to underprivileged households that do not have access to electricity or are unable to afford it. 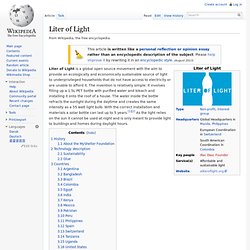 The invention is relatively simple. It involves filling up a 1.5L PET bottle with purified water and bleach and installing it onto the roof of a house. The water inside the bottle refracts the sunlight during the daytime and creates the same intensity as a 55 watt light bulb. With the correct installation and materials a solar bottle can last up to 5 years.[1][2] As the light relies on the sun it cannot be used at night and is only meant to provide light to buildings and homes during daylight hours.

History[edit] In less than a year since inception, over 200,000 bottle bulbs were installed in communities around the world. About the MyShelter Foundation[edit] Technology description[edit] Sustainability[edit] Glue[edit] Countries[edit] Argentina[edit] How To Make Edible Water Bottles. The United States uses about 50 billion plastic water bottles each year, which requires 17 million barrels of oil. 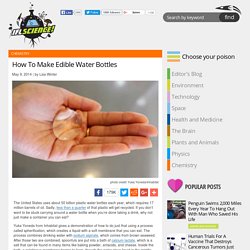 Sadly, less than a quarter of that plastic will get recycled. If you don’t want to be stuck carrying around a water bottle when you’re done taking a drink, why not just make a container you can eat? Yuka Yoneda from Inhabitat gives a demonstration of how to do just that using a process called spherification, which creates a liquid with a soft membrane that you can eat.

The process combines drinking water with sodium alginate, which comes from brown seaweed. After those two are combined, spoonfuls are put into a bath of calcium lactate, which is a salt that can be found in many items like baking powder, antacids, and cheese. Want to experiment with other liquids? Extremely Simple & Affordable: The Drinkable Book! It Could Just Save Thousands Of Lives. From the same group that has created the LifeStraw comes another incredible invention that has the power to drastically change the lives of thousands that currently do not have easy access to clean drinking water. 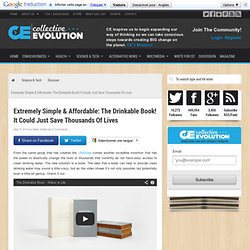 The new solution is a book. The idea that a book can help to provide clean drinking water may sound a little crazy, but as the video shows it’s not only possible, but potentially even a little bit genius. Check it out: As the narrator says right off the top: 3.4 million people die each year from water related disease. The Drinkable Book is an incredible solution to help aid this reality and hopefully overcome it. We all undoubtedly deserve to have access to clean drinking water. On the Cutting Edge of Musical Innovation. The Earth Harp, strung over a canyon in Malibu, CA. 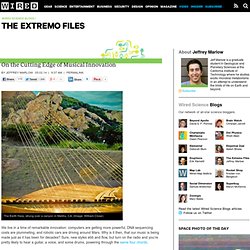 (Image: William Close) We live in a time of remarkable innovation: computers are getting more powerful, DNA sequencing costs are plummeting, and robotic cars are driving around Mars. Why is it then, that our music is being made just as it has been for decades? Sure, new styles ebb and flow, but turn on the radio and you’re pretty likely to hear a guitar, a voice, and some drums, powering through the same four chords.

If William Close had his way, things would be different. Today, the artist/musician has over 100 novel instruments to his name, a catalog of which reads like an anthropological study of another planet. This Nanotech Toilet Uses No Water And Produces Energy From Human Waste. About 2.5 billion people do not have access to sanitised toilet facilities, according to the UN. 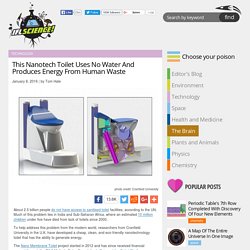 Much of this problem lies in India and Sub-Saharan Africa, where an estimated 10 million children under five have died from lack of toilets since 2000. To help address this problem from the modern world, researchers from Cranfield University in the U.K. have developed a cheap, clean, and eco-friendly nanotechnology toilet that has the ability to generate energy. The Nano Membrane Toilet project started in 2012 and has since received financial support through the Bill & Melinda Gates Foundation's Reinvent the Toilet Challenge, as well as receiving numerous awards for design and technology. Here’s how it works: After the user “finishes their business,” a smell-proof rotating bowl drops the waste into a holding tank.