Graywater (also spelled greywater, graywater, gray water) The Living Machine. A living machine. Sounds suspiciously dangerous. Science fiction is full of those confused computers who threaten astronauts' lives and rebellious robots that require Arnold Schwarzenegger-types to save the human race. But at the Penn State Center for Sustainability, a living machine is not a fictional antagonist. In fact, it's the opposite. It's here to save the day. When the Class of 2000 voted to restore the greenhouse on Old Botany Building as its gift to Penn State, the Center's vision of an ecologically sound water-treatment facility became a reality.

A Living Machine (capital letters, it's a patented invention) is a series of tanks teeming with live plants, trees, grasses and algae, koi and goldfish, tiny freshwater shrimp, snails, and a diversity of microorganisms and bacteria. The Center for Sustainability is collaborating with Ocean Arks International, a Vermont-based not-for-profit that has been designing Living Machines for over ten years.

Fastcoexist. In countries with water shortages, saving every drop is essential. 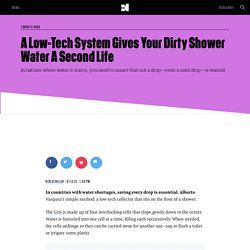 Alberto Vasquez's simple method: a low-tech collector that sits on the floor of a shower. The Gris is made up of four interlocking cells that slope gently down to the center. Greywater Reuse - Greywater is gently used water from your bathroom sinks, showers, tubs, and washing machines. 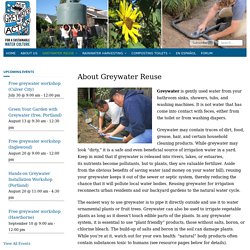 It is not water that has come into contact with feces, either from the toilet or from washing diapers. Greywater may contain traces of dirt, food, grease, hair, and certain household cleaning products. While greywater may look “dirty,” it is a safe and even beneficial source of irrigation water in a yard. Keep in mind that if greywater is released into rivers, lakes, or estuaries, its nutrients become pollutants, but to plants, they are valuable fertilizer.

Aside from the obvious benefits of saving water (and money on your water bill), reusing your greywater keeps it out of the sewer or septic system, thereby reducing the chance that it will pollute local water bodies. The easiest way to use greywater is to pipe it directly outside and use it to water ornamental plants or fruit trees. How to build simple water sand filter from home stuffs. How to build simple water sand filter from home stuffs. ShowerSpring Greywater Irrigation Systems – Easily capture and reuse your shower water to irrigate your landscape. ShowerSpring is an easy to install, gravity-fed greywater system which does not require a pump to operate. Grey Water Systems for Landscape Irrigation I Flotender. Flotender Grey Water System Video. Flotender Grey Water System Video. Grey Flow PS Plug & Play - Greywater system. Grey Water Recycling and Grey Water Treatment System. 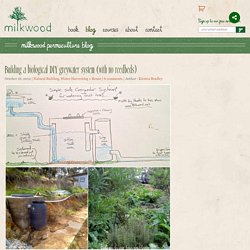 We also wanted to use the outputs to irrigate a grove of important fruit trees, as water is very precious here, especially in a dry year. After many, many hours of research on systems involving reed beds, infiltration trenches, fancy UV zappers and all the rest, we decided, on the advice of permaculture and greywater specialist Ross Mars, to keep it simple, and let the biology do the work. To summarise the approach (and Ross Mars’ general take of domestic greywater), we decided that the intermittent trickle of water coming from our bath and shower would be best dealt with in a living and dynamic system, rather than in a series of reed beds or trenches.

10 Awesome Gadgets To Reuse Water. We like the concept behind this. 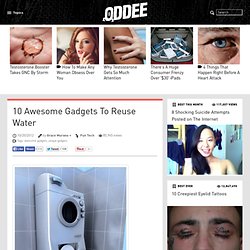 Small space apartment dwellers would appreciate the utility of having a washing machine option in their bathroom (we know we would). But then again, the toilet in the concept photo above looks like it's giving a piggyback ride to a reject from The Transformers. The "Washup" concept is a sustainable and space saving water consumption device that reuses wasted water from the clothes washing cycle for toilet flushing later (hopefully not at the same time...do your load before dropping it). We just worry we'd accidentally lose socks in the toilet while loading and emptying the machine above. Ingenuity gets an all new meaning in designer Andrew Leinonen's simple yet very powerful Filterbrella concept. With most nations facing water crisis, recycling used water becomes more important than ever before.