A neuroscientist reveals the truth about fear and anxiety and why we're getting it so wrong - Ideapod blog. Anxiety is a big problem for people in America these days. 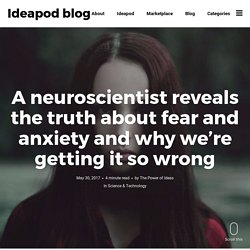 According to recent stats, fear and anxiety disorders affect roughly 20 percent of all Americans at a cost of more than $40 billion in lost productivity every year. The way we treat these anxiety disorders is largely based on the brain’s “fear circuit” – the amygdala and its nearby structures – that governs how we respond to threats and danger. Yet the man who created this map of the “fear circuit” now believes that we’re getting it all wrong. A 75-Year Harvard Study Has Revealed The One Most Important Factor In Human Happiness - Ideapod blog. Have you ever heard of the Harvard study that ran for 75 years to assess what makes us happy? 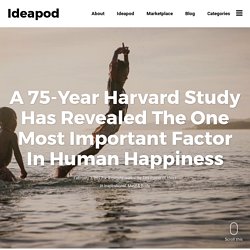 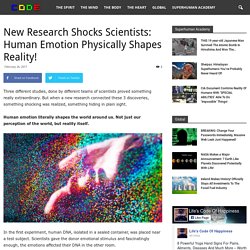 Fear Of The Unknown - Curiosity Creates. You See What Others Can’t: 8 Signs That You Are Highly Sensitive to Energy. Every day, more and more people realize that they fall in the category of people with empathy(compassion), highly sensitive to energy and emotions of the environment. 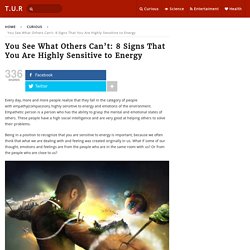 Empathetic person is a person who has the ability to grasp the mental and emotional states of others. These people have a high social intelligence and are very good at helping others to solve their problems. The Science of Stress and How Our Emotions Affect Our Susceptibility to Burnout and Disease. I had lived thirty good years before enduring my first food poisoning — odds quite fortunate in the grand scheme of things, but miserably unfortunate in the immediate experience of it. 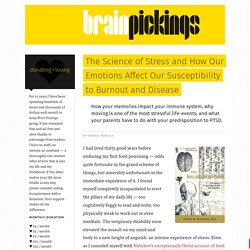 I found myself completely incapacitated to erect the pillars of my daily life — too cognitively foggy to read and write, too physically weak to work out or even meditate. The temporary disability soon elevated the assault on my mind and body to a new height of anguish: an intense experience of stress. Amazon. After 75 Years Of Research, Harvard Study Found That Happiness Comes From One Thing… The Effects Of Negative & Positive Emotions On Our Health – Collective Evolution. The existence of the mind/body connection was once completely shunned by mainstream science, with many dismissing it as mere pseudoscience. 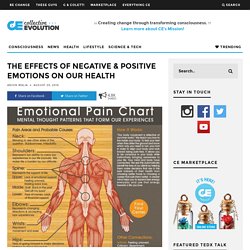 Fortunately, the conversation has shifted in recent years, thanks in large part to new scientific publications that have made it quite clear that our thoughts, feelings, and emotions play a crucial role in regulating our overall health and biology. There are several examples from different areas of science that prove this. Daniel Goleman. Daniel Goleman (born March 7, 1946) is an author, psychologist, and science journalist. 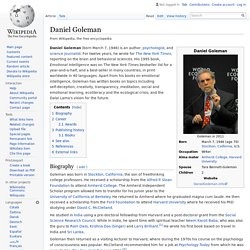 For twelve years, he wrote for The New York Times, reporting on the brain and behavioral sciences. His 1995 book, Emotional Intelligence was on The New York Times bestseller list for a year-and-a-half, and a best-seller in many countries, in print worldwide in 40 languages. Apart from his books on emotional intelligence, Goleman has written books on topics including self-deception, creativity, transparency, meditation, social and emotional learning, ecoliteracy and the ecological crisis, and the Dalai Lama’s vision for the future. This Is Why You Should Consider Changing The Frequency Of Your Music When Listening To It – Collective Evolution. “If you want to find the secrets of the universe, think in terms of energy, frequency and vibration.” – Nikola Tesla “What we have called matter is energy, whose vibration has been so lowered as to be perceptible to the senses. 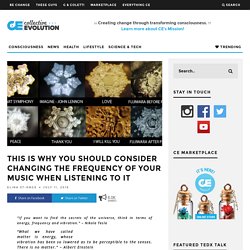 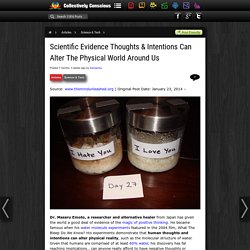 Masaru Emoto, a researcher and alternative healer from Japan has given the world a good deal of evidence of the magic of positive thinking. He became famous when his water molecule experiments featured in the 2004 film, What The Bleep Do We Know? His experiments demonstrate that human thoughts and intentions can alter physical reality, such as the molecular structure of water.

Given that humans are comprised of at least 60% water, his discovery has far reaching implications… can anyone really afford to have negative thoughts or intentions? The Science of Happiness: Why complaining is literally killing you. Sometimes in life, all the experience and knowledge simmering around in that ol’ consciousness of ours combines itself in a way that suddenly causes the cerebral clockwork to click into place, and in this fluid flow of thought we find an epiphany rising to the surface. 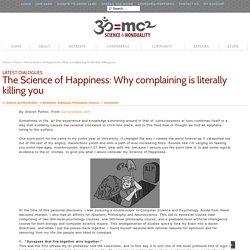 One such point for me came in my junior year at University. It changed the way I viewed the world forever as it catapulted me out of the last of my angsty, melancholic youth and onto a path of ever-increasing bliss. Sounds like I’m verging on feeding you some new-agey, mumbo-jumbo, doesn’t it? Well, bear with me, because I assure you the point here is to add some logical evidence to the ol’ cliches, to give you what I would consider my Science of Happiness. At the time of this personal discovery, I was pursuing a double-major in Computer Science and Psychology. The Science of Happiness: Why complaining is literally killing you. 10-Damasio-OCR. 7 Ways To Trigger The Heart Field – The Most Powerful Healing Force There Is. Source: www.preventdisease.com | Original Post Date: August 15, 2014 – Every cause of disease first begins with an imbalance in the body’s energy systems, specifically, the interaction between how the heart communicates with the brain and the body.

Fix that and there is no disease, ever. The heart can produce an electrical field 100 times greater than the brain and a magnetic field 5000 times greater. Brené Brown: The power of vulnerability. The gaze that hinders expression. Autism: Altered connections between eye contact and facial mimicry - It is not enough to observe what abilities are altered in those with autism, we also need to understand how each function interacts with the others. In fact, whereas in typical subjects, joint attention appears to facilitate facial mimicry (both are skills relevant for human social interaction), the opposite holds true for those with autism. That is what a new study, just published in Autism Research, suggests.

Empathy -- the ability to identify and understand other people's emotions -- has many components, some sophisticated and involving complex thought processes, others basic but essential nonetheless. The latter include joint attention -- which is activated by direct eye contact between two or more individuals, and allows them to focus their attention on the same object; and facial mimicry -- the tendency to reproduce on one's own face the expressions of emotion seen in others. Computer Maps 21 Distinct Emotional Expressions—Even “Happily Disgusted” Embargoed until 3:00 p.m. ET on March 31, 2014. Computer Maps 21 Distinct Emotional Expressions—Even “Happily Disgusted” Empathy Connection Resonance. Can-Internal-Excellence-be-Measured_Deshpande.pdf.

Eunoia II (Beautiful thought; 아름다운 생각 ll) from Lisa Park. Artist Manipulates 48 Pools Of Water With Her Mind. By Beckett Mufson “Brain power” takes on a literal meaning when it comes to EEG painting, mind-responsive furniture, and the workof Lisa Park. Emotion in Marketing: How Our Brains Decide What's Shareable.

10 facts about infidelity, as divulged by Helen Fisher. RSA Shorts - The Power of Empathy. Pain pack. Mapa uczuć Głównego Miasta. HOW ARE YOU FEELING TODAY? Russian Scientist Photographs the Soul Leaving the Body, With a Special Camera. Does the soul exists? According to Dr. The Search for Basic Emotions. Table of Contents. Your emotional cloud. The Oxford Handbook of Religion and Emotion - Google Books.

How Emotionally Intelligent Are You? Here's How To Tell. Emotion Infographic on Behance. Scalar ANVC. We Feel Fine / by Jonathan Harris and Sep Kamvar. We Feel Fine / Movements. Movements. List of Emotions. Contrasting and categorization of emotions. Why Do We Laugh?