A Collection of Very Strange Maps. Slagsmålsklubben - Sponsored by destiny. The latest delivery — Dear Data. Using Cows to Define Politics. Ever needed to know the difference between communism and socialism? 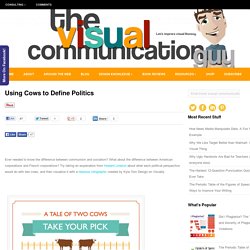 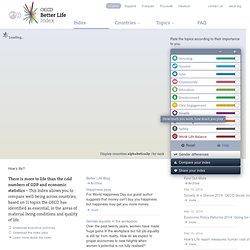 There is more to life than the cold numbers of GDP and economic statistics – This Index allows you to compare well-being across countries, based on 11 topics the OECD has identified as essential, in the areas of material living conditions and quality of life. Download executive summary Download the index data Learn more about the index Better Life BlogArchive Happiness pays For World Happiness Day our guest author suggests that money can't buy you happiness but happiness may get you more money. more ... Gender equality in the workplace Over the past twenty years, women have made huge gains in the workplace but full job equality is still far from reality. More ... Education for well-being: Online discussion We know education is an essential component of well-being, so what makes an education that promotes well-being? More ... Visit our blog Blog RSS feed Find Out MoreArchive Mar 19, 2014 Society at a Glance 2014: OECD Social Indicators. 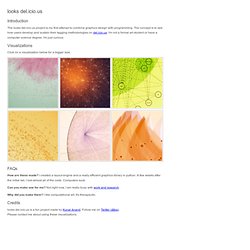 The concept is to see how users develop and sustain their tagging methodologies on del.icio.us. I'm not a formal art student or have a computer science degree. Nicola Triscott. Lise Autogena + Joshua Portway, Most Blue Skies (2010) I’m currently at ISEA2012, the 18th International Symposium on Electronic Art, a six-day international conference, this year taking place in Albuquerque under the glorious banner ‘Machine Wilderness’, which references the New Mexico region as an area of rapid growth and technology within vast expanses of open land. 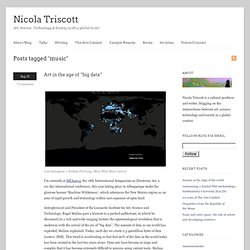 Astrophysicist and President of the Leonardo Institute for Art, Science and Technology, Roger Malina gave a keynote to a packed auditorium, in which he discussed (in a rich and wide-ranging lecture) the epistemological revolution that is underway with the arrival of the era of “big data”. The amount of data in our world has exploded, Malina explained. Today, each day we create 2.5 quintillion bytes of data (source: IBM). This trend is accelerating so fast that 90% of the data in the world today has been created in the last two years alone. Collab_vis. Citeology - Projects.

Update: We have submitted a Citeology paper to alt.CHI which you can download here. 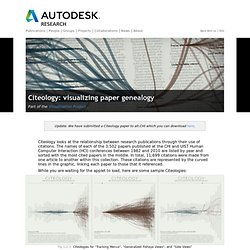 Citeology looks at the relationship between research publications through their use of citations. The names of each of the 3,502 papers published at the CHI and UIST Human Computer Interaction (HCI) conferences between 1982 and 2010 are listed by year and sorted with the most cited papers in the middle. In total, 11,699 citations were made from one article to another within this collection. These citations are represented by the curved lines in the graphic, linking each paper to those that it referenced.

DataArt - Visualisations. 5 Best Data Visualization Projects of the Year – 2009. It was a huge year for data. 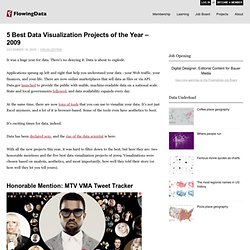 There's no denying it. Data is about to explode. Applications sprung up left and right that help you understand your data - your Web traffic, your finances, and your life. There are now online marketplaces that sell data as files or via API. The Evolution of the Web. Demonstrations Project. 20 Great Motion Graphics of 2012. 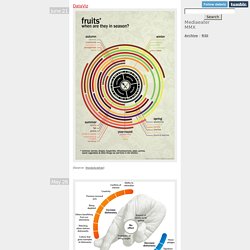 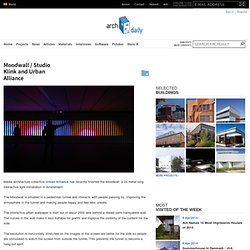 The Moodwall is situated in a pedestrian tunnel and interacts with people passing by, improving the atmosphere in the tunnel and making people happy and feel less unsafe. The interactive urban wallpaper is built out of about 2500 leds behind a ribbed semi-transparent wall. Michael Deal ◊ Graphic Design. Ongoing study of Beatles through infographics, much of which is based on secondary sources such as sales statistics, biographies, recording session notes, sheet music, and raw audio readings. 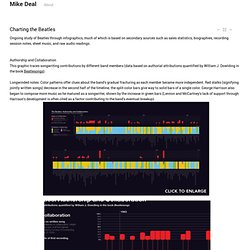 This graphic traces songwriting contributions by different band members (data based on authorial attributions quantified by William J. Dowlding in the book Beatlesongs. Bestiario. Mapa uczuć Głównego Miasta. Mind-bending music visualizations. Blog About Infographics and Data Visualization - Cool Infographics. 10 significant visualisation developments: July to December 2012. To mark the milestone of each mid-year and end of year I try to take a reflective glance over the previous 6 months period in the data visualisation field and compile some of the most significant developments.

These are the main projects, events, new sites, trends, personalities and general observations that have struck me as being important to help further the development of this field. Earlier this year I published this collection for the first 6 months of 2012 and now I’d like to mark the end of 2012 with my latest perspective. I look forward to hearing from you with suggestions for the developments you believe have been most significant. 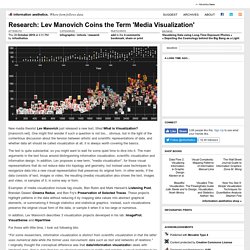 [manovich.net]. One might first wonder if such a question is not too... obvious, but in the light of the contentious discussion about the tension between artistic and scientific representations of data, and whether data art should be called visualization at all, it is always worth covering the basics. The text is quite substantial, so you might want to wait for some quiet time to dive into it. The main arguments in the text focus around distinguishing information visualization, scientific visualization and information design.

In addition, Lev proposes a new term, "media visualization", for those visual representations that do not reduce data into topology and geometry, but instead uses techniques to reorganize data into a new visual representation that preserves its original form. Datasets on Datavisualization. Wikileaks US Embassy Cables 29 Nov 2010 Datasets Infographic, Politics Wikileaks began on Sunday November 28th publishing 251,287 leaked United States embassy cables, the largest set of confidential documents ever to be released into the public domain. 10 Best Data Visualization Projects of the Year – 2010. Data visualization and all things related continued its ascent this year with projects popping up all over the place.

Some were good, and a lot were not so good. More than anything, I noticed a huge wave of big infographics this year. It was amusing at first, but then it kind of got out of hand when online education and insurance sites started to game the system. Although it's died down a lot ever since the new Digg launched. That's what stuck out in my mind initially as I thought about the top projects of the year.

Visuwords™ online graphical dictionary and thesaurus. Word Tree. A visual exploration on mapping complex networks. 50 Great Examples of Data Visualization. Wrapping your brain around data online can be challenging, especially when dealing with huge volumes of information. And trying to find related content can also be difficult, depending on what data you’re looking for.

Blaise Aguera y Arcas demos Photosynth. A visual exploration on mapping complex networks. Information Is Beautiful. Visual Communication. Identity GNP+ is the global network for and by people living with HIV. As a network of networks they are driven by the needs of people living with HIV worldwide. New Prevention Technologies (NPT) is a division of GNP+ that supports research and development of any health related technology, drug resistance, testing and access as well as other ethical issues. Concerning the identity, every prevention technologies has been visually translated into different stroke styles and become the foundation for this identity. Futurelab – An international marke. Introducing the Knowledge Graph. Kultura popularna w sieci i poza siecią.