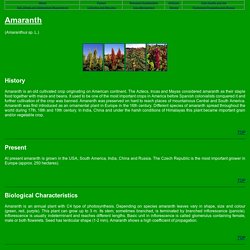 L.) History Amaranth is an old cultivated crop originating on American continent. The Aztecs, Incas and Mayas considered amaranth as their staple food together with maize and beans. It used to be one of the most important crops in America before Spanish colonialists conquered it and further cultivation of the crop was banned. Present At present amaranth is grown in the USA, South America, India, China and Russia.

Biological Characteristics Amaranth is an annual plant with C4 type of photosynthesis. Attributes This plant is valued for the positive chemical composition of seed that does not contain gluten. Grain quality and Use Amaranth seeds have high content of proteins, essential amino acids and minerals. Food Amaranth is used as an ingredient primarily in bread, pasta, baby's food, instant drinks, etc. Fodder Amaranth is a valuable nutritious feedstuff with high production ability. Other Soil, Climate and Temperature Requirements Cultivation and Manuring Crop Management Sowing. Amaranth, high in calcium. 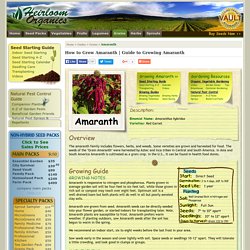 Plants grown in average garden soil will be four-feet to six-feet tall, while those grown in rich soil or compost may reach over eight feet. Optimum soil is a well-drained loam but both plants will do well in all but poorly aerated clay soils. Amaranth are grown from seed. Amaranth seeds can be directly seeded into your flower garden, or started indoors for transplanting later. Note, Amaranth plants are susceptible to frost. We recommend an indoor start, six to eight weeks before the last frost in your area. HOW TO GROW AMARANTH FROM SEED. The edible Amaranth – or Chinese spinach as it is more commonly called - is an ancient food plant native to South America. 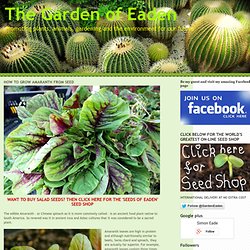 So revered was it in ancient Inca and Aztec cultures that it was considered to be a sacred plant. Amaranth leaves are high in protein and although nutritionally similar to beets, Swiss chard and spinach, they are actually far superior. Growing Amaranth (Love-lies-bleeding) in United Kingdom - cool/temperate climate - Garden calendar and reminders. Home | Vegetables and herbs to plant | Climate zones | About Gardenate | Contact us This planting guide is a general reference intended for home gardeners. 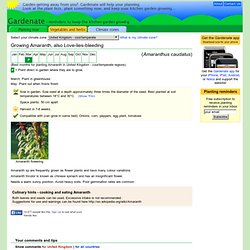 We recommend that you take into account your local conditions in making planting decisions. Gardenate is not a farming or commercial advisory service. Gardening Pointers! On Growing Amaranth and Quinoa Organically. Recipes There are so many similarities between quinoa (keen' wah) and amaranth that it seems appropriate to describe them together. 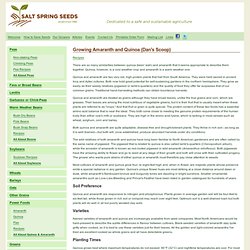 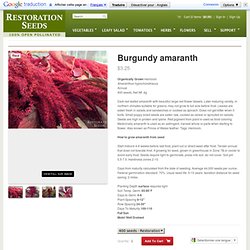 Later maturing variety, in northern climates suitable for greens, may not grow to full size before frost. Leaves are eaten fresh in salads and sandwiches or cooked as spinach. Does not get bitter when it bolts. Small poppy sized seeds are eaten raw, cooked as cereal or sprouted on salads. How to grow amaranth from seed Start indoors 4-6 weeks before last frost, plant out or direct seed after frost. Days from maturity calculated from the date of seeding.

Planting Depth surface requires lightSoil Temp. Rethinking a Weed: the Truth about Amaranth. It was only going to be a matter of time before Nature caught up with the over-abundant use of herbicides. 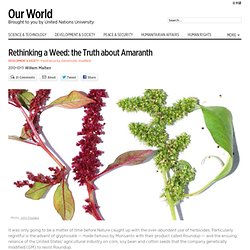 Particularly regretful is the advent of glyphosate — made famous by Monsanto with their product called Roundup — and the ensuing reliance of the United States’ agricultural industry on corn, soy bean and cotton seeds that the company genetically modified (GM) to resist Roundup. Studies began documenting weed resistance several years ago but the problem continues to mount, with The New York Times warning of the “Rise of the Superweeds” analogous to that of the ‘superbugs’ in medicine. About 22 US states and many millions of acres are apparently affected by the scourge, in particular a plant dubbed ‘Palmer pigweed’ that has developed the ability to thrive on glysophate.

It seems Monsanto may have long ago anticipated the inevitable failure of the devious combo of genetically modified seeds plus Roundup.