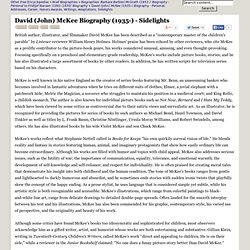 Holmes' praise has been echoed by other reviewers, who cite McKee as a prolific contributor to the picture-book genre, his works considered unusual, amusing, and even thought-provoking. Focusing specifically on a preschool and elementary-grade readership, McKee's works include picture books, stories, and he has also illustrated a large assortment of books by other readers. In addition, he has written scripts for television series based on his characters. McKee is well known in his native England as the creator of series books featuring Mr.