Protector of the Weak Chapter 1: 1 Through Space and Time, a Buffy: The Vampire Slayer and King Arthur crossover fanfic. Title: Protector Of The Weak Author: Jmaria Rating: PG-13 to R Disclaimer: Not mine. 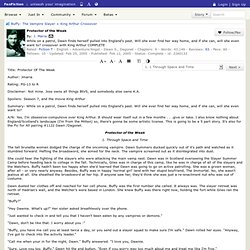 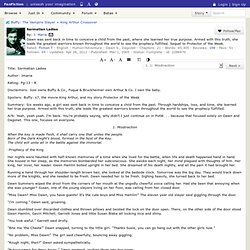 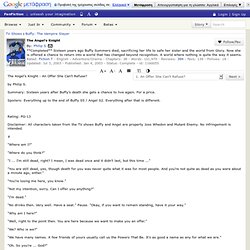 By Philip S. Summary: Sixteen years after Buffy's death she gets a chance to live again. For a price. Spoilers: Everything up to the end of Buffy S5 / Angel S2. Everything after that is different. Rating: PG-13 Disclaimer: All characters taken from the TV shows Buffy and Angel are property Joss Whedon and Mutant Enemy. "Where am I? " "Where do you think? " "I ... "You are still dead, yes, though death for you was never quite what it was for most people. The Road Not Taken Chapter 1: Prologue, a buffy: the vampire slayer fanfic. Title: The Road Not Taken Authors: Carrie & Robin (Buffychick & Robin the Crossover Junkie) Summary: After a dream sends Angel & crew back to Sunnydale they discover a demon that grants each person a glimpse at what their life might have been like had just one moment been altered…and the choice to live that life, or the one they're currently in. 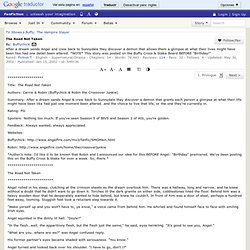 Rating: PG Spoilers: Nothing too much. If you've seen Season 5 of BtVS and Season 2 of AtS, you're golden. Feedback: Always wanted, always appreciated. The Night Remembers Chapter 1: Part 1, a buffy: the vampire slayer fanfic. Hey guys, this is a brand-new story of mine. 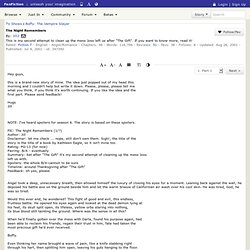 The idea just popped out of my head this morning and I couldn't help but write it down. Please, please, please tell me what you think, if you think it's worth continuing. If you like the idea and the first part. Please send feedback! HugsJill NOTE: I've heard spoilers for season 6. Caress of the Moonlight Chapter 1: Prologue: You Love to Hate Me, a sailor moon x-overs fanfic. 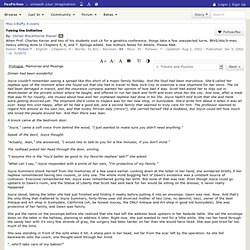 Joyce couldn't remember seeing a spread like this short of a major family holiday. And the food had been marvelous. She'd called her nephew spur of the moment when she found out that she had to travel to New York City to examine a new shipment for her store. The lot had been damaged in transit, and the insurance company wanted her opinion of how bad it was. A knock came at the bedroom door. "Joyce," came a soft voice from behind the wood, "I just wanted to make sure you didn't need anything. " Speak of the devil, Joyce thought. "Actually, Jean," she answered, "I would like to talk to you for a few minutes, if you don't mind. " The redhead poked her head through the door, smiling. Preludes to Heartbreak Chapter 1: Default Chapter, a buffy x-overs fanfic. 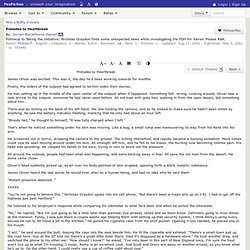 This was it, the day he'd been working towards for months. Finally, the elders of the outpost had agreed to let him video their stories. He was setting up in the middle of the open center of the outpost when it happened. Something felt…wrong. There was an itching on the back of his left hand, the one holding the camera, and as he looked to make sure he hadn't been bitten by anything, he saw the battery indicator flashing, marking that he only had about an hour left.

"Bloody hell," he thought to himself, "It was fully charged when I left. " That's when he noticed something under his skin was moving. Heartbreak: The Funeral of Buffy Summers Chapter 1: The Next Morning, a buffy x-overs fanfic. DISCLAIMER: Buffy the Vampire Slayer, Angel, and all related characters are owned by Mutant Enemy Productions and Fox Television. 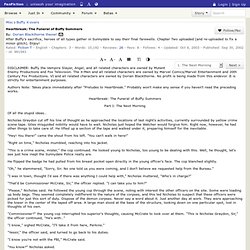 The X-Men and all related characters are owned by Marvel Comics/Marvel Entertainment and 20th Century Fox Productions. VI and all related characters are owned by Dorian Blackthorne. No profit is being made from this endevor. It is strictly for entertainment purposes. Authors Note: Takes place immediately after "Preludes to Heartbreak. " Champions of the Universe Chapter 1: The Beginning, a buffy x-overs fanfic. Champions Of The Universe: Buffy the Vampire Slayer Disclaimer: In no way do I own any of these characters, or their histories, except of course for the Powers, the Compound, and bits and pieces of the technology, which is really more an amalgam of all fictional tech I've ever been exposed to. 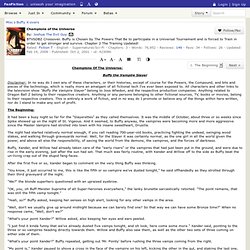 All characters and other links to the television show "Buffy the Vampire Slayer" belong to Joss Whedon, and the respective production companies. Anything related to Dragon Ball Z belong to their respective creators. Anything or any persons belonging to other fictional sources, TV, books or movies, belong to their respective creators. Love's Bitch Chapter 1: Prologue: You Love To Hate Me, a sailor moon x-overs fanfic. One More Time Chapter 1, a buffy: the vampire slayer fanfic. Disclaimer: I don't own "Buffy the Vampire Slayer" or any characters from that show. 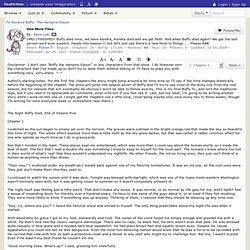 I do however own the characters that I've made up so don't try to steal them without asking or I'll have to poke you with something very, very sharp. . ^ . ^ Repossessed. Repossessed Sorry about that, forgot to put this up: Standard disclaimer, I own nothing. Not Buffy, Not the Highlander franchise or anything else. This is a multiple crossover so you can guess there's going to be a lot in here that isn't mine. Being the site that this is, I think everybody's pretty much cool with it. Save maybe for some narcs. See ya next updateCrazyD.

Xander Harris was nobody's fool, no matter what anyone else would tell you. Jesse had been turned into a soulless demon animated corpse and Willow slowly started drifting from him and becoming a person he was beginning to slightly dislike. He saw more than he would like to admit and some of it was starting to worry him. Tears in our Cheerios. Two good things, whole lotta bad This is answering littleoldme's "The Mommy Anita Challenge" - At some well-established point pre-Chosen, one of the major players in the Buffyverse is, for reasons that are up to you, sucked into the alternate dimension of Anita Blake.

Unfortunately, cross-dimensional travel has its side effects, and aforementioned character undergoes age reversal and some additional power attributions while crossing over, so that they arrive in St. Louis as a young child with a lot of power. One of the Anitaverse characters finds the child and takes him/her in. Buffy Crossover Fanfiction.