Epcot Theme Park. EPCOT. Epcot - Attractions. EPCOT ®: Orlando Attractions Review. EPCOT is now ubiquitous with both Disney and Orlando, but it's actually an acronym, standing for Experimental Prototype Community of Tomorrow, and one of its two sections – Future World – is an... 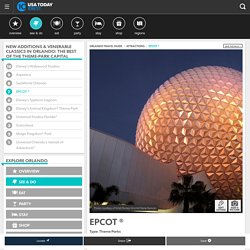 Read More EPCOT is now ubiquitous with both Disney and Orlando, but it's actually an acronym, standing for Experimental Prototype Community of Tomorrow, and one of its two sections – Future World – is an ever-evolving testament to that very idea, showcasing advancements in technology from energy to space travel. World showcase features slices of life from 11 different nations, miniature cultural immersions via food, music, art, architecture and more. That said, don't think the kids will miss out on their favorite Disney characters. Epcot (Orlando, FL): Top Tips Before You Go - TripAdvisor. Disney’s Spaceship Earth ride at Epcot review. The most eye catching sight at Walt Disney World’s Epcot theme park is the Spaceship Earth ride. 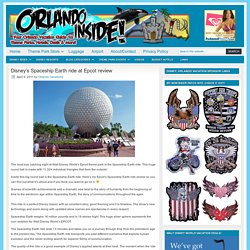 This huge round ball is made with 11,324 individual triangles that form the outside! Inside this big round ball is the Spaceship Earth ride. Here’s my Epcot’s Spaceship Earth ride review so you can find out what it’s about and if you think you want to go on it. Scenes of scientific achievements add a dramatic new twist to the story of humanity from the beginning of time to the electronic age within Spaceship Earth, the story of communications throughout the ages. Epcot with Young Children — Build A Better Mouse Trip. Epcot’s Land Pavilion has three attractions and two restaurants – all of which are appropriate for families with small children. 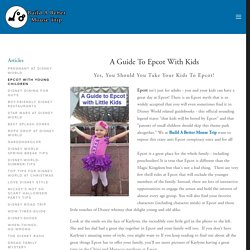 Soarin’ is Epcot’s most popular attraction but should be considered a “headliner”, rather than a “thrill ride” because it is gentle enough for almost everyone tall enough to ride this hang-glider flight simulator ride. Don’t worry, you’ll sit upright and have a seat belt as you are raised to experience the sights – and smells – projected on a large IMAX screen. 10 Tips for Visiting EPCOT with Kids. Parents planning a trip to Walt Disney World might be inclined to skip EPCOT based on the mistaken assumption that kids won’t appreciate the park’s focus on technology and world cultures. 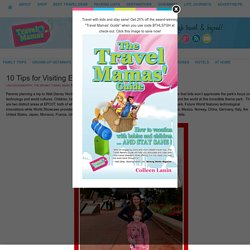 Children, however, love to set off on a fantastical journey into the future and around the world at this incredible theme park. There are two distinct areas at EPCOT, both of which have more in common with a World’s Fair than a typical theme park. Future World features technological innovations while World Showcase provides guests with an opportunity to experience the cultures of 11 countries: Mexico, Norway, China, Germany, Italy, the United States, Japan, Morocco, France, United Kingdom and Canada. Here are 10 Tips for visiting EPCOT with kids. 1) Plan ahead There’s a direct correlation between the amount of pre-trip research and subsequent family enjoyment at EPCOT. Spaceship Earth Courtyard (Photo credit: Benjamin D. 2) Arrive early This is a very big park. 3) Use FASTPASS 4) Skip it! April 27, 2009.

My Orlando Obsession. I have taken the DiveQuest tour at Epcot twice so far, with a third time scheduled for this December. 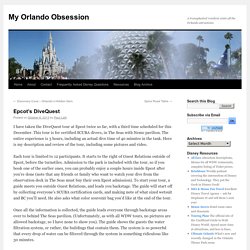 This tour is for certified SCUBA divers, in The Seas with Nemo pavilion. The entire experience is 3 hours, including an actual dive time of 40 minutes in the tank. Here is my description and review of the tour, including some pictures and video. Each tour is limited to 12 participants. It starts to the right of Guest Relations outside of Epcot, before the turnstiles. Drinking Around the World - Drink at Epcot - Thrillist. 2017 Epcot International Food and Wine Festival. August 31 – November 13, 2017. 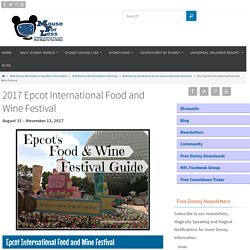 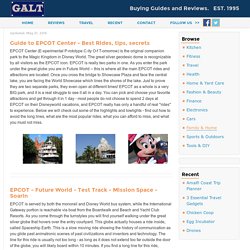 The great silver geodesic dome is recognizable by all visitors as the EPCOT icon. EPCOT is really two parks in one. Epcot for Seniors - Orlandovacation.com. The icon for Epcot, and the first thing you will encounter on your arrival, is Spaceship Earth, known affectionately as the giant golf ball. 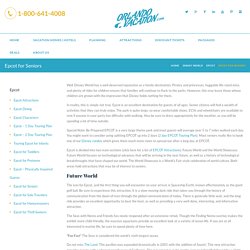 Be sure to experience this attraction. It is a slow-moving dark ride that takes you through the history of communication from the dawn of man through the global communication of today. There is generally little wait, and the long ride provides an excellent opportunity to beat the heat, as well as providing a very well-done, interesting, and informative attraction. The Seas with Nemo and Friends has newly reopened after an extensive rehab. Though the Finding Nemo overlay makes the exhibit more child-friendly, the massive aquariums provide an excellent look at a variety of ocean life.

*Fun Fact* The Seas is considered the world’s sixth largest ocean. Do not miss The Land. *Tip* The front row provides far superior seating. Also inside The Land pavilion, be sure to take the boat ride. Undercovertourist. National food blog ranks Epcot's restaurants. Click to enlarge Photo courtesy Walt Disney World Resort Just in time for the off-season, national foodie site Eater has semi-definitively (there was some disagreement, understandably) ranked the 11 Epcot country pavilions in terms of the quality and deliciousness of their food offerings. 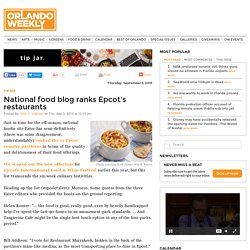 Epcot Reviews and Guide. Print our full Epcot guide Download and print our complete guide to Epcot, and access printable guides to nearly 100 theme parks by registering now for FREE. 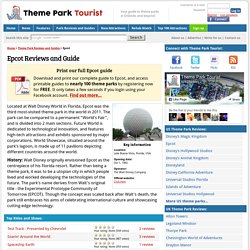 It only takes a few seconds if you login using your Facebook account. Top 7 Restaurant Picks at EPCOT – Reviews and Tips – DisneyFanatic.com. Planning a trip to Walt Disney World? One of my favorite things to do is think about where I’m going to eat each day. My absolute favorite place to dine at Disney is in World Showcase in Epcot. This is a great way to experience different world cultures. Not only can you enjoy food you may not get at home, but you will be served by cast members from the respective countries. Disney allows you to make dining reservations as early as six months out from your vacation. 1. 2. 3. 4. 5. 6. 7.

The 10 Best Attractions at Epcot. When Epcot opened in 1982 it was known as EPCOT. Those capital letters served a purpose: It was an acronym for Experimental Prototype Community of Tomorrow. Based on Walt Disney’s unrealized dream of creating an actual, inhabited city based on utopian ideals and cutting edge technology, when EPCOT opened it was essentially a modern-day, park-sized update of Disney’s Carousel of Progress, examining both the past and future of technology, communication and society. I first went there in 1982, shortly after it opened, as an easily impressed kindergartener whose mind was blown by the Pin Art displays at the Journey Into Imagination pavilion. With beautiful retrofuturistic buildings straight out of sci-fi films and the kind of endless enthusiasm over science that was already feeling quaint by the 1980s, EPCOT felt like the nerdier but cooler older cousin to the Magic Kingdom. Honorable Mention: Captain EO.

Best Epcot Attractions & Ride Guide. Here we cover the pros and cons of Epcot’s rides and shows, which attractions are must-dos, and more. Epcot reviews. Log In · Register Theme Park Insider - Park & Hotel Reviews - Walt Disney World Epcot See all photos | Submit Photo Epcot was the second theme park at the Walt Disney World Resort, opening October 1, 1982 and welcoming an estimated 11.8 million visitors last year. EPCOT Entertainment. Discover Epcot. A Guide to the flora, fauna, and fun of the world's greatest theme park! Destination EPCOT: First Impressions - Blogs - MiceChat. You only get one chance to make a great first impression and that is certainly the case with theme parks.

The arrival experience must transport guests from where they are to where the designers want them to be. Come with me as we explore the front gates of Epcot, in Orlando Florida. (For the purposes of this story, we use "EPCOT" in all caps to talk about Walt's ideas for a city of tomorrow and "Epcot" to discuss the theme park which was actually built) First, let's got back to sort of the beginning. Over the years, it became a well-known fact that Walt Disney did not like to do the same thing twice. Those ambitions cost a lot of money. Many years later, the same thing would happen with another blockbuster – Disneyland. Walt liked new challenges and he already had a Disneyland. Sadly, Walt passed away before his most ambitious dreams could be realized.

The Magic Kingdom was to be an updated Disneyland.