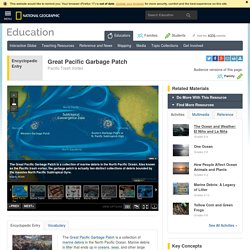 Photograph by Ray Boland, NOAA. This file is licensed under the Creative Commons Attribution 2.0 Generic license. Worldwide Garbage Patches The Great Pacific Garbage Patch is not the only marine trash vortex—it’s just the biggest. The Atlantic and Indian Oceans both have trash vortexes. Strange CargoWhen ships are caught in storms, they often lose cargo to the oceans. In 1990, five shipping containers of Nike sneakers and work boots were lost to the Pacific in a storm. Quotable Captain"So on the way back to our home port in Long Beach, California, we decided to take a shortcut through the gyre, which few seafarers ever cross.

"Yet as I gazed from the deck at the surface of what ought to have been a pristine ocean, I was confronted, as far as the eye could see, with the sight of plastic. "It seemed unbelievable, but I never found a clear spot. K-12 Resources. Causes and Effects of Ocean Pollution. Oceans are the largest water bodies on the planet Earth. 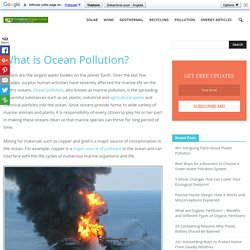 Over the last few decades, surplus human activities have severely affected the marine life on the Earth’s oceans. Ocean pollution, also known as marine pollution, is the spreading of harmful substances such as oil, plastic, industrial and agricultural waste and chemical particles into the ocean. Since oceans provide home to wide variety of marine animals and plants, it is responsibility of every citizen to play his or her part in making these oceans clean so that marine species can thrive for long period of time. Mining for materials such as copper and gold is a major source of contamination in the ocean. For example, copper is a major source of pollutant in the ocean and can interfere with the life cycles of numerous marine organisms and life.

The greatest threat to our planet is the belief that someone else will save it. ~ Robert Swan According to National Geographic, Sealion eating plastic bad thing could get sick we should not do ocean pollution we do not want this cute little animal to get h. People know that trash in the water: compromises the health of humans, wildlife and the livelihoods that depend on a healthy ocean;threatens tourism and recreation, and the critical dollars they add to our local economies;complicates shipping and transportation by causing navigation hazards; andgenerates steep bills for retrieval and removal. 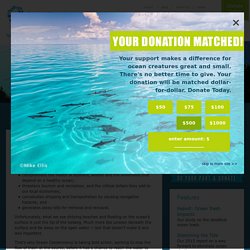 Unfortunately, what we see dirtying beaches and floating on the ocean’s surface is just the tip of the iceberg. Much more lies unseen beneath the surface and far away on the open water — but that doesn’t make it any less important. That’s why Ocean Conservancy is taking bold action, working to stop the flow of trash at the source, before it has a chance to reach the water to choke and entangle dolphins or endanger sea turtles, or ruin our beaches and depress our local economies. 10 Things You Can Do to Save the Ocean. 1. 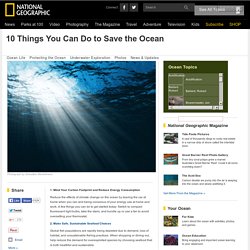 Mind Your Carbon Footprint and Reduce Energy Consumption Reduce the effects of climate change on the ocean by leaving the car at home when you can and being conscious of your energy use at home and work. A few things you can do to get started today: Switch to compact fluorescent light bulbs, take the stairs, and bundle up or use a fan to avoid oversetting your thermostat. 2. Make Safe, Sustainable Seafood Choices. Ocean Pollution Causes.

Before we can find solutions, we must understand ocean pollution causes. 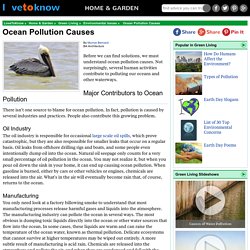 Not surprisingly, several human activities contribute to polluting our oceans and other waterways. Major Contributors to Ocean Pollution There isn't one source to blame for ocean pollution. In fact, pollution is caused by several industries and practices. People also contribute this growing problem. Oil Industry The oil industry is responsible for occasional large scale oil spills, which prove catastrophic, but they are also responsible for smaller leaks that occur on a regular basis. Manufacturing You only need look at a factory billowing smoke to understand that most manufacturing processes release harmful gases and liquids into the atmosphere. Agriculture Farming and agriculture may seem far removed from ocean problems.

Littering and Dumping Few things can dampen the mood of your romantic sunset walk on the beach more than seeing a plastic bottle wash up onto shore. Sewage Ocean Pollution Eventually Affects Everyone. By 2100, Earth Will Have an Entirely Different Ocean. The Pacific Ocean. 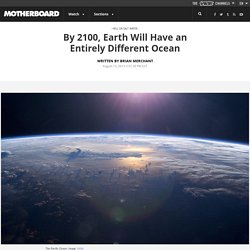 Image: NASA The ocean is in the midst of a radical, manmade change. It can seem kind of crazy that one of the most immense properties on Earth—the ocean washes over 71 percent of the planet—could be completely transformed by a swarm of comparatively tiny, fleshy mammals. But humans are indeed remaking the ocean, in almost every conceivable way. The ocean we know today—that billions of people swim, fish, float, and surf in—that vast planetary body of water will be of an entirely different character by the end of the century.