Cholesterol wars: Does a pill a day keep heart attacks away? Simon Danaher By Michael Brooks IT STARTED in 2014, with a routine health check. 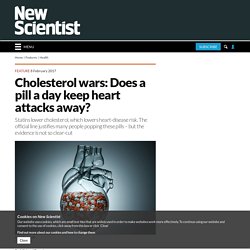 I was 44, and fit enough to have completed a string of Olympic-distance triathlons. I exercised most days, at the gym, on a football pitch, running or cycling. Admittedly, my body mass index always came up as “obese”, but that never worried me. The problems began when a nurse did a finger-prick test of my blood cholesterol. It wasn’t broken. So, I was being invited to join the club. High-fiber diet keeps gut microbes from eating colon's lining, protects against infection.

It sounds like the plot of a 1950s science fiction movie: normal, helpful bacteria that begin to eat their host from within, because they don't get what they want. 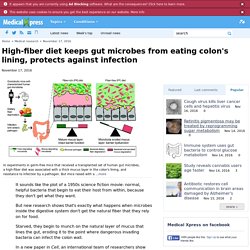 But new research shows that's exactly what happens when microbes inside the digestive system don't get the natural fiber that they rely on for food. Starved, they begin to munch on the natural layer of mucus that lines the gut, eroding it to the point where dangerous invading bacteria can infect the colon wall. In a new paper in Cell, an international team of researchers show the impact of fiber deprivation on the guts of specially raised mice. The mice were born and raised with no gut microbes of their own, then received a transplant of 14 bacteria that normally grow in the human gut. Scientists know the full genetic signature of each one, making it possible to track their activity over time. The researchers also saw that the mix of bacteria changed depending on what the mice were being fed, even day by day. Why choosing the right workout could fine-tune your brain.

By Teal Burrell PUMPING iron to sculpt your biceps. 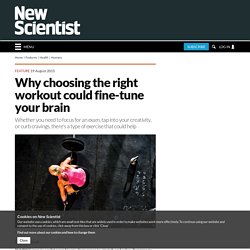 Yoga poses to stretch and relax. Running to whittle your waistline and get fit fast. There are loads of reasons why it’s smart to exercise, and most of us are familiar with the menu of options and how each can shape and benefit your body. First evidence that sperm epigenetics affect the next generation. The International Photo Co/Getty By Helen Thomson SPERM pass on more than just their DNA. 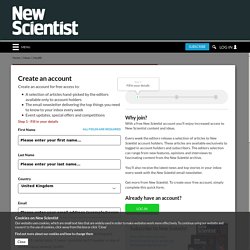 Chemical switches attached to the genomes of sperm – known as epigenetic tags – have been shown to alter the next generation for the first time. The discovery could explain how a father’s experiences may later affect gene activity in their offspring, a vital step towards improving health and fertility. Throughout life, our environment changes the activity of our genes, switching them on or off without altering DNA. Over the past decade, a handful of studies have suggested that environmental stressors experienced by parents can also affect the health of their children and even grandchildren.

Why super-gonorrhoea is spreading and may soon be untreatable. Maurizio De Angelis/SPL By Debora MacKenzie England’s public health agency has launched an “incident response” after discovering more cases of gonorrhoea that are resistant to nearly all antibiotics. 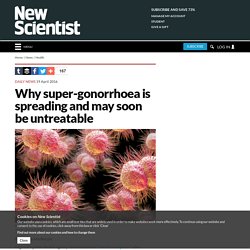 Doctors across England have been asked to double-check that people they treat for gonorrhoea have been cured, to report any treatment failures, and to treat their sexual contacts in hope of containing the bacteria. But fewer than half of such contacts are being traced. Gonorrhoea, also known as “the clap”, was largely controlled by antibiotics after the second world war. Explosive road rage-like anger linked to parasite spread by cats. Getty Images There are many ways your cat might be filling you with rage. 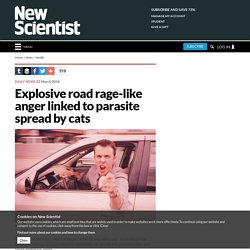 Scratching your furniture, sitting on your computer keyboard – or giving you parasites that may cause explosive anger. Infection with Toxoplasma gondii, a protozoan parasite carried by cats, has been linked to a human psychiatric condition called intermittent explosive disorder. People who have IED typically experience disproportionate outbursts of aggression, like road rage. T. gondii is already known to change the behaviour of the organisms it infects. It can also infect humans, through contact with cat faeces, poorly cooked meat or contaminated water, and as many as one-third of the world’s population may be infected.

To see if T. gondii is associated with aggression, Emil Coccaro at the University of Chicago and his colleagues examined 358 adults. I can tell you how to heal yourself with hypnosis. Michael Blann/Getty You believe hypnosis has the potential to transform healthcare. 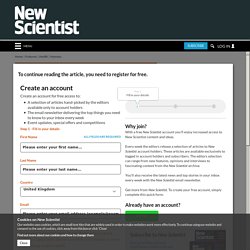 How so? Many problems we bring to our doctors have a psychophysiological component: irritable bowel syndrome, recurrent migraines, anxiety-related symptoms. And we know that people can somehow keep powerful medications from being effective. Access to mental healthcare is important here, but it’s physicians who are most often in a position to help those people self-regulate. Clinical hypnosis is about learning how to interpret nonverbal cues and improve trust, communication and empathy. Marathon mind: How brain training could smash world records. Nadine Rupp/Bongarts/Getty AT THE 2014 Berlin marathon, Kenya’s Dennis Kimetto beat everyone who has ever run the 42.2-kilometre race, blazing his way to a new world record time of 2:02.57. 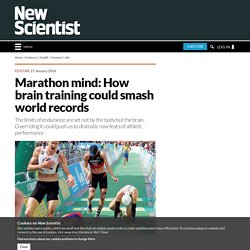 Shaving 26 seconds off the previous best was an extraordinary achievement, particularly for a man who only began training seriously in 2010. And yet Kimetto was 3 minutes off the 2-hour mark – the fabled barrier considered by many as the greatest challenge left in sport. Tap the placebo effect to unlock your body&apos;s healing powers. Marcel Stive/Plainpicture LINDA BUONANNO had been sick with irritable bowel syndrome for 15 years when she saw a TV advertisement recruiting participants for a new study. 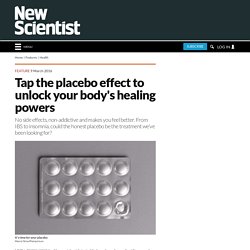 Desperate for help, she signed on, even after learning that the potential treatments she would be offered consisted of either nothing – or pills filled with nothing. When the experiment ended, she begged the researchers to let her keep the pills. Cancer’s penicillin moment: Drugs that unleash the immune system. Martin Oeggerli 2012, kindly supported by FHNW WHEN Vicky Brown was diagnosed with advanced malignant melanoma in 2013, she was in shock. 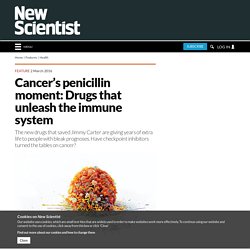 Even with the best treatments available at the time, most people with her diagnosis lived for about six months. Then her fate took a turn for the better. Through the Melanoma UK charity, Brown was referred to take part in a trial of an experimental treatment at the Royal Marsden Hospital in London. Four genes discovered that will help you live beyond 100. Fancy living to 100? Your chances are boosted if you carry protective variants of four newly discovered genes. They are: • ABO Determines blood group • CDKN2B Helps regulate cellular life cycles. Diabetic pancreas cells made to produce insulin by bone protein. What an incredible transformation. A protein used to help bones mend can also force pancreatic cells into producing insulin. The discovery could help people with type 1 diabetes produce their own insulin without having to take daily injections. In type 1 diabetes, beta cells in the pancreas that make insulin – the hormone that keeps our blood glucose levels at a safe concentration – are destroyed by the immune system.

As a result, people with the disease have to inject themselves daily with insulin. SAN FRANCISCO, ITALY / Bloomberg: Italy has the World’s 3rd Most Efficient Health Care. Bacteria now resistant even to 'last resort' antibiotics. Well that’s ironic. As if to mark World Antiobiotic Awareness Week, antibiotic resistance just got a whole lot scarier. Resistance genes identified in China suggests we could soon see bacteria that are resistant to every known type of antibiotic, and these genes have already been found in bacteria infecting people. Until now, a type of bacteria known as Gram negative have remained susceptible to one particular class of antibiotics, called polymyxins.

These have become known as “last resort” antibiotics, increasingly used to treat infections that resist every other kind. In 2012, the World Health Organisation classified colistin, the most widely used polymyxin, as being critically important for human health. Anti-booze drug may flush out dormant HIV and could lead to cure. It could be just what HIV researchers the world over have been waiting for – a non-toxic drug that will drive the virus from its hiding places around the body. What is it? The well-known anti-alcohol drug, Antabuse. The drug, also called disulfiram, has been given to alcoholics for decades, making them vomit if they drink at the same time – a strong disincentive.

Let them eat steak: How to eat meat the healthy way. (Image: Simon Danaher) BACON causes breast cancer; chops clog your arteries. The headlines are clear – if you care about your health, you shouldn’t be eating meat. Once considered the star attraction of a balanced, healthy plate of food, meat is now linked to obesity, heart disease and cancer. Add the environmental concerns over a growing global appetite for meat, and it seems meat should now be an occasional guilty pleasure rather than a daily staple, or so we are told. Yet the evidence isn’t quite as clear-cut as the headlines suggest, and not everyone is convinced of the perils of tucking into a juicy steak.

World Health Organization may approve first malaria vaccine. Experts advising the World Health Organization look set to recommend the use of the world’s first malaria vaccine. Malaria kills half a million African children under 5 every year. In April, a massive trial of the vaccine RTS,S, made by GlaxoSmithKline, found that children over 5 who got three doses plus a booster 18 months later had 36 per cent fewer cases of malaria over the subsequent four years.

Cases fell 26 per cent in young babies vaccinated in the same way – enough to avert one or two cases of malaria per child. Stressed dads affect offspring brain development through sperm microRNA. More and more, scientists have realized that DNA is not the only way that a parent can pass on traits to their offspring. World's first biolimb: Rat forelimb grown in the lab. Video: Rat biolimb grown in the lab. Men - Here's How A New Woman Alters Your Ejaculations. Sperm competition has been observed extensively in the animal world and it can get pretty weird. Some male spiders voluntarily cut off their own penis and leave it in females as a “plug” after copulation, and nematode worms increase the amount of sperm they ejaculate when in the presence of competing males. Shunning the sun may be killing you in more ways than you think - opinion - 15 June 2015. Poor sleep might be the mechanism that triggers Alzheimer’s memory loss. New research suggests that poor sleep may be a crucial missing piece in the Alzheimer’s puzzle, and could lead to new treatments for the debilitating memory loss associated with the disease.

Scientists from the University of California, Berkeley in the US have found evidence that the protein believed to trigger Alzheimer’s disease, known as beta-amyloid, may also be involved in blocking deep, restorative sleep - the kind that we need each night in order to move our short-term memories over to a more permanent region of our brains. "Over the past few years, the links between sleep, beta-amyloid, memory, and Alzheimer's disease have been growing stronger," neuroscientist William Jagust, who was involved in the study, said in a press release.

Good looking: Video games that can help you see better - health - 25 May 2015. Fetal cells injected into a man's brain to cure his Parkinson's - health - 26 May 2015. Panic, depression and stress: The case against meditation - opinion - 14 May 2015. TWITCHING, trembling, panic, disorientation, hallucinations, terror, depression, mania and psychotic breakdown – these are some of the reported effects of meditation.