Are you a nice person? Brain scans can tell how generous you are. Ariel Skelley/Getty By New Scientist staff and Press Association Are you a giver or a taker? 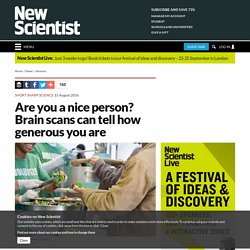 Brain scans have identified a region of the cerebral cortex responsible for generosity – and some of us are kinder than others. The area was identified using a computer game that linked different symbols to cash prizes that either went to the player, or one of the study’s other participants. The volunteers readily learned to score prizes that helped other people, but they tended to learn how to benefit themselves more quickly. MRI scanning revealed that one particular brain area – the subgenual anterior cingulate cortex – seemed to be active when participants chose to be generous, prioritising benefits for someone else over getting rewards for themselves.

But Patricia Lockwood, at the University of Oxford, and her team found that this brain area was not equally active in every volunteer. This finding may lead to new ways to identify and understand anti-social and psychopathic behaviour. Modafinil Is The First Confirmed Drug That Makes You Smarter. Though initially made for narcoleptics (people having trouble sleeping), many soon caught on that modafinil can enhance cognitive abilities. 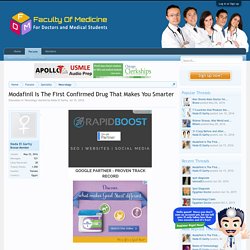 Right now, it’s a favorite among students who use it when preparing for exams with visible results, they claim. But modafinil isn’t the first such “smart drug” we’ve come across. It’s likely that you’ve seen some TV or internet ads marketing ‘smart pills’ that supposedly enhance cognitive abilities, but with mere anecdotal evidence backing it up. In contrast, modafinil really seems to be a legit smart drug, according to a systematic review of reports documenting the effects of the drug. The meta-analysis was made by a team at University of Oxford and Harvard Medical School.Make me smarter. Matrix-style memory prosthesis set to supercharge human brain. Human memory is about to get supercharged. 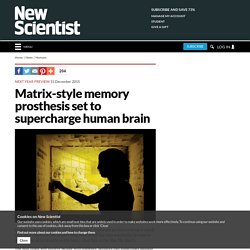 A memory prosthesis being trialled next year could not only restore long-term recall but may eventually be used to upload new skills directly to the brain – just like in the film The Matrix. The first trials will involve people with epilepsy. Seizures can sometimes damage the hippocampus, causing the brain to lose its ability to form long-term memories. To repair this ability, Theodore Berger at the University of Southern California and his colleagues used electrodes already implanted in people’s brains as part of epilepsy treatment to record electrical activity associated with memory. Scans prove there's no such thing as a 'male' or 'female' brain. You may have read that having a male brain will earn you more money. 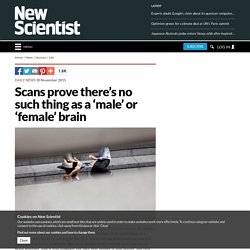 Or maybe that female brains are better at multitasking. But there is no such thing as a female or male brain, according to the first search for sex differences across the entire human brain. It reveals that most people have a mix of male and female brain features. And it also supports the idea that gender is non-binary, and that gender classifications in many situations are meaningless. “This evidence that human brains cannot be categorised into two distinct classes is new, convincing, and somehow radical,” says Anelis Kaiser at the University of Bern, Switzerland. 9 things mentally strong people do every day. Tyler Bolken/flickrThey seek to grow stronger. 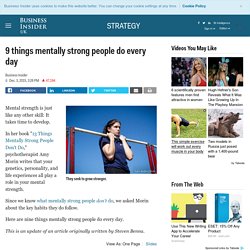 Mental strength is just like any other skill: It takes time to develop. In her book "13 Things Mentally Strong People Don't Do," psychotherapist Amy Morin writes that your genetics, personality, and life experiences all play a role in your mental strength. Since we know what mentally strong people don't do, we asked Morin about the key habits they do follow.

Here are nine things mentally strong people do every day. This is an update of an article originally written by Steven Benna. 1. Rasstock/Shutterstock. Digital version of piece of rat brain fires like the real thing. The brain is going digital. 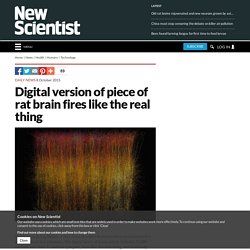 A tiny piece of a rat’s brain has been reconstructed in minute detail in a computer. The digital piece of brain, which includes 31,000 neurons and their 37 million synapses, fires like the real thing, and is already revealing fresh clues as to how the brain works. The simulation is the first significant achievement of the Blue Brain project, which was launched 10 years ago by Henry Markram at the Swiss Federal Institute of Technology in Lausanne, Switzerland.

People with Parkinson's walk again after promising drug trial. An expensive cancer drug may reverse late-stage Parkinson’s disease, enabling participants in a small clinical trial to speak and walk again for the first time in years. 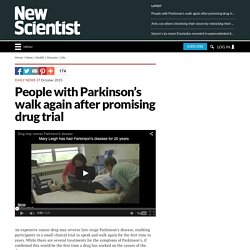 While there are several treatments for the symptoms of Parkinson’s, if confirmed this would be the first time a drug has worked on the causes of the disease. “We’ve seen patients at end stages of the disease coming back to life,” says Charbel Moussa of Georgetown University Medical Center in Washington DC, who led the trial. The drug, called nilotinib, works by boosting the brain’s own “garbage disposal system” to clear proteins that accumulate in the brains of people with Parkinson’s disease, says Moussa. Key moments in human evolution were shaped by changing climate. Human, whatever the weather (Image: Steve McCurry/Magnum) The ways in which climate affected human evolution have been hotly debated for over a century. 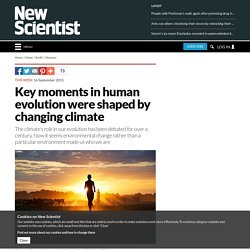 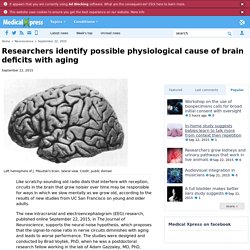 The new intracranial and electroencephalogram (EEG) research, published online September 22, 2015, in The Journal of Neuroscience, supports the neural noise hypothesis, which proposes that the signal-to-noise ratio in nerve circuits diminishes with aging and leads to worse performance. The studies were designed and conducted by Brad Voytek, PhD, when he was a postdoctoral research fellow working in the lab of Adam Gazzaley, MD, PhD, professor of neurology, physiology and psychiatry at the UCSF Center for Integrative Neuroscience.

"Our measurement of noise seems to show up in aging, just as we thought it would," Voytek said. "Imagine that individual neurons are like surfers," Voytek said. Why choosing the right workout could fine-tune your brain. PUMPING iron to sculpt your biceps. Yoga poses to stretch and relax. Running to whittle your waistline and get fit fast. There are loads of reasons why it’s smart to exercise, and most of us are familiar with the menu of options and how each can shape and benefit your body. But we are discovering that there are numerous ways in which exercise makes you smart too. Which Character Strengths Are Most Predictive of Well-Being? - Beautiful Minds - Scientific American Blog Network.

In 2004, Christopher Peterson and Martin Seligman came out with Character Strengths and Virtues: A Handbook and Classification. This volume was a significant contribution to psychology, a sort of antidote to the DSM's focus on mental illness, and an important reminder to psychologists that humans aren't only full of illness. Humans also have a lot of character. The book laid out the following 24 character strengths: 20 billion nanoparticles talk to the brain using electricity - health - 08 June 2015. Electricity is the brain's language, and now we can speak to it without wires or implants. Nanoparticles can be used to stimulate regions of the brain electrically, opening up new ways to treat brain diseases. It may even one day allow the routine exchange of data between computers and the brain. A material discovered in 2004 makes this possible.

When "magnetoelectric" nanoparticles (MENs) are stimulated by an external magnetic field, they produce an electric field. If such nanoparticles are placed next to neurons, this electric field should allow them to communicate. 10 Body Language Secrets of Highly Successful People. Fetal cells injected into a man's brain to cure his Parkinson's - health - 26 May 2015. A man in his mid-50s with Parkinson's disease had fetal brain cells injected into his brain last week. He is the first person in nearly 20 years to be treated this way – and could recover full control of his movements in roughly five years. "It seemed to go fine," says Roger Barker of the University of Cambridge, who is leading the international team that is reviving the procedure.

The treatment was pioneered 28 years ago in Sweden, but two trials in the US reported no significant benefit within the first two years following the injections, and the procedure was abandoned in favour of deep brain stimulation treatments. What these trials overlooked is that it takes several years for fetal cells to "bed in" and connect properly to the recipient's brain. Many Swedish and North American recipients improved dramatically, around three years or more after the implants – long after the trials had finished. Scientists have found a drug that makes people more compassionate. Researchers have created a drug that makes people more sensitive to inequality, more likely to share resources and generally more compassionate - in other words, it makes them kinder.

And the potential is already blowing my selfish little brain. The drug, called tolcapone, prolongs the effect of dopamine in the prefrontal cortex of the brain, a region involved in the regulation of complex thought and our emotions. A big bank balance leads to big-brained babies - health - 30 March 2015. Have Mum and Dad got a few quid to spare? You'd better hope so, because the wealthier your parents are, the larger the surface area of your brain is likely to be – a structural feature known to be associated with greater intelligence in children. HIV's hiding places at last revealed by simple scan - health - 09 March 2015.

It's like using heat cameras to catch criminals on the run, but it finds HIV instead. A novel scanning technique is enabling researchers to pinpoint where in the body HIV is lurking. "This could really help with the research for a functional cure," says Alan Winston of Imperial College London, who was not involved in the study. Reboot Your Life: 20 Mental Barriers You Should Let Go Of. You are in an imaginary hot air balloon. Mind expanding: Can you increase your IQ? - life - 09 October 2014. Daydream believers: Is imagination our greatest skill? - health - 17 September 2014. Chimps Outplay Humans in Brain Games. Meaty puzzle: Did TB evolve to boost hungry brains? - opinion - 24 June 2014. PHTHISIS. Consumption. King's Evil. White plague. Debunking the Genius Myth. Picture a “genius” — you’ll probably conjure an image of an Einstein-like character, an older man in a rumpled suit, disorganized and distracted even as he, almost accidentally, stumbles upon his next “big idea.”

In truth, the acclaimed scientist actually said, “It’s not that I’m so smart, it’s just that I stay with problems longer.” But the narrative around Einstein and a lot of accomplished geniuses — think Ben Franklin, the key and the bolt of lightning — tends to focus more on mind-blowing talent and less on the hard work behind the rise to success. Weird thought-generator: How society's fears shape OCD - health - 23 April 2014.

The knockout enigma: How your mechanical brain works - life - 29 August 2013. What is Intelligence? - Machine Intelligence Research Institute. Heartbeat used to generate out-of-body experience - health - 13 June 2013. Mindscapes: The man who needs to paralyse himself - health - 30 May 2013. The voices within: The power of talking to yourself - life - 03 June 2013. Memory Implants May Start Human Trials In 2 Years. Zap the brain with electricity to speed up mental maths - health - 16 May 2013.

Age-defying: Master key of lifespan found in brain - health - 01 May 2013. A "Complex" Theory of Consciousness. Turning back the clock on regeneration in neurons. Mental puzzles underlie music’s delight.