Super-literate software reads and comprehends better than humans. IN A lab next to the river on New York’s Upper West Side a computer will soon start reading. 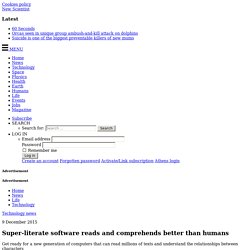 It is part of a cadre of computers that are learning to read more like humans, helping us digest and understand society’s huge volumes of text on a large scale. Called the Declassification Engine, it will comb through 4.5 million US State Department cables from the 1930s to the 1980s – everything the department has declassified so far. It’s more than any human could read, but the software will analyse the lot, mapping social connections and looking for new narratives about the behaviour of US diplomats and officials abroad in the 20th century, says Owen Rambow, a computer scientist at Columbia University, which runs the Declassification Engine. Uk.businessinsider. Most human beings get about 75 years of existence. 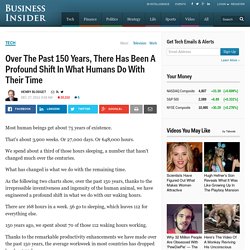 That's about 3,900 weeks. Or 27,000 days. Or 648,000 hours. We spend about a third of those hours sleeping, a number that hasn't changed much over the centuries. Andrew McAfee – Non-Technologists Agree: It’s the Technology. Two papers came out last year that examined important issues around jobs and wages. 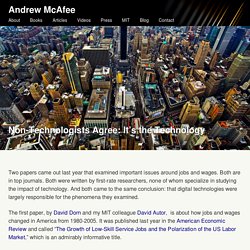 Both are in top journals. The AI boss that deploys Hong Kong's subway engineers. Who’s in charge? 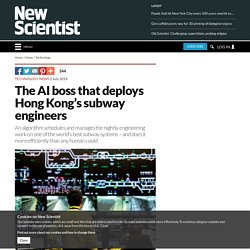 JUST after midnight, the last subway car slips into its sidings in Hong Kong and an army of engineers goes to work. In a typical week, 10,000 people carry out 2600 engineering works across the system – from grinding rough rails smooth and replacing tracks to checking for damage. People might do the work, but they don’t choose what needs doing. Instead, each task is scheduled and managed by artificial intelligence. Hong Kong has one of the world’s best subway systems. “It will probably be Beijing first,” says Andy Chun of Hong Kong’s City University, who designed the AI system and worked with MTR to build it into their systems.

Chun’s AI program works with a simulated model of the entire system to find the best schedule for necessary engineering works. Rise of the machines as ANZ brings in robot workers to do the 'boring' jobs. First jobs went to India, now ANZ Banking Group is leading the way locally in a global rise of robot software systems, which can do the work of employees in fields ranging from payroll administration to helpdesk support and customer service in a fraction of the time. ANZ has spent the past year refining a well-developed program of work in an emerging field known as Robotic Process Automation (RPA), whereby tasks previously conducted by employees are now done by increasingly intelligent software that learns on the job. Much of the robotic work is initially being conducted in ANZ's network of so-called captive centres or hubs in India, the Philippines and China, but some Australian roles are already changing to incorporate the new systems. 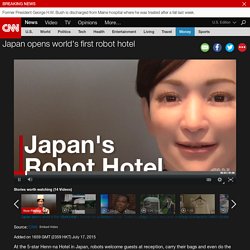 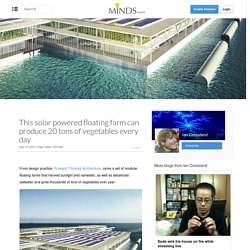 Inspired by Chinese floating fish farms, these rectangular units measure 200x350 meters and can connect with other modules via walkways. Me, myself and iCub: Meet the robot with a self - life - 18 March 2015. WHAT is the self? 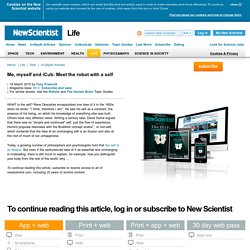 Rene Descartes encapsulated one idea of it in the 1600s when he wrote: "I think, therefore I am". He saw his self as a constant, the essence of his being, on which his knowledge of everything else was built. Others have very different views. Writing a century later, David Hume argued that there was no "simple and continued" self, just the flow of experience. Exponential Technologies. AI interns: Software already taking jobs from humans - life - 31 March 2015. ARABIC MIX 2014 BEST BELLY DANCE DABKE REMIX ARAB RAI DJ ALCAPONE KURDISH عربی العربية رقص دبكة. The AI Revolution: The Road to Superintelligence  Artificial superintelligence is coming, probably whether we like it or not, and probably within our lifetimes. 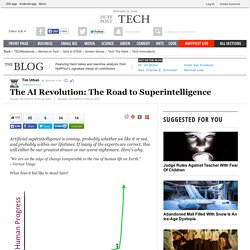 If many of the experts are correct, this will either be our greatest dream or our worst nightmare. Here's why. "We are on the edge of change comparable to the rise of human life on Earth. " --Vernor Vinge What does it feel like to stand here? It seems like a pretty intense place to be standing -- but then you have to remember something about what it's like to stand on a time graph: You can't see what's to your right. Which probably feels pretty normal. The Far Future: Coming Soon. The bitcoin rush: Pioneers on the financial frontier - tech - 29 January 2015. Meet miners, outlaws and sheriffs all striving to get ahead in the volatile new world of virtual money THE past year has seen a 21st century gold rush, and speculators have been falling over themselves for a piece of the action. 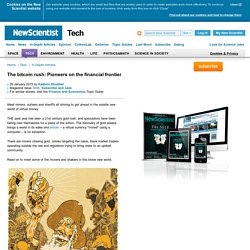 The discovery of gold always brings a world in its wake and bitcoin – a virtual currency "mined" using a computer – is no exception. There are miners chasing gold, crooks targeting the naive, black market traders operating outside the law and regulators trying to bring order to an upstart community. Peer-to-peer lending heralds mortgages without banks - tech - 23 January 2015. Crowdsourced loans and peer-to-peer lending are cutting banks out of the mortgage market – and this is just the start NEED a mortgage? 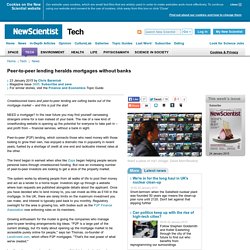 In the near future you may find yourself canvassing strangers online for a loan instead of your bank. The rise of a new kind of crowdfunding website is opening up the potential for everyone to take part in – and profit from – financial services, without a bank in sight. Peer-to-peer (P2P) lending, which connects those who need money with those looking to grow their own, has enjoyed a dramatic rise in popularity in recent years, fuelled by a shortage of credit at one end and lacklustre interest rates at the other. The trend began in earnest when sites like Zopa began helping people secure personal loans through crowdsourced funding. The system works by allowing people from all walks of life to pool their money and act as a lender to a home buyer. As Robots Grow Smarter, American Workers Struggle to Keep Up. A machine that administers sedatives recently began treating patients at a Seattle hospital. At a Silicon Valley hotel, a bellhop robot delivers items to people’s rooms.

Last spring, a software algorithm wrote a breaking news article about an earthquake that The Los Angeles Times published. Although fears that technology will displace jobs are at least as old as the Luddites, there are signs that this time may really be different. The technological breakthroughs of recent years — allowing machines to mimic the human mind — are enabling machines to do knowledge jobs and service jobs, in addition to factory and clerical work. And over the same 15-year period that digital technology has inserted itself into nearly every aspect of life, the job market has fallen into a long malaise. Will remote-controlled robots clean you out of a job? - opinion - 04 December 2014. Who are you looking at? (Image: Yves Gellie/Picture Tank) "Digital immigrants" in other countries could soon guide robots around your house. Some find that creepy – and that could be just the start of the trouble THE death of distance.

That was the great promise of the internet in its early days: by making cheap, immediate communication possible around the world, it would eliminate geographical constraints on relationships, media and commerce. Computers are learning to see the world like we do - tech - 29 October 2014. It is surprisingly difficult to build computers that can recognise the many different objects we see every day, but they are getting better all the time WHAT animal is in the picture above? Glance at the page, wheels in the brain spin: yeah, that's a bird. The response comes so fast that you barely notice the processing behind it.

If only machines found it that easy. Object recognition is surprisingly tricky for computers. Ask the crowd: Robots learn faster, better with online helpers. University of Washington computer scientists have shown that crowdsourcing can be a quick and effective way to teach a robot how to complete tasks. Instead of learning from just one human, robots could one day query the larger online community, asking for instructions or input on the best way to set the table or water the garden. The research team presented its results at the 2014 Institute of Electrical and Electronics Engineers International Conference on Robotics and Automation in Hong Kong in early June. Watson in your pocket: Supercomputer gets own apps - tech - 28 April 2014. Read full article Continue reading page |1|2. In Stephen Wolfram's future, 'a box of a trillion souls' will create any universe we want (interview)

How can big data and smart analytics tools ignite growth for your company? Find out at DataBeat, May 19-20 in San Francisco, from top data scientists, analysts, investors, and entrepreneurs. Register now and save $200! In his keynote presentation to SXSW 2014 last week, computing pioneer Stephen Wolfram demonstrated the capabilities of his new Wolfram Language. Online university courses can't change the world alone - opinion - 10 March 2014. They promise equality of access to higher learning, but online courses will only succeed with better general education in place first, say two educationalists. Rolls-Royce believes time of drone cargo ships has come. Wikipedia-size maths proof too big for humans to check - physics-math - 17 February 2014. Google buys AI firm DeepMind to boost image search - tech - 27 January 2014. The Rich and Their Robots Are About to Make Half the World's Jobs Disappear.

Will Work For Free. A smart-object recognition algorithm that doesn’t need humans. (Credit: BYU Photo) Vertical farms sprouting all over the world - tech - 16 January 2014. Leader: "Fruit and veg, fresh from the skyscraper" Virtual tailor measures you up for perfect online shop - tech - 03 January 2014. Eight ways robots stole our jobs in 2013. If we talked about nothing else in 2013 -- and, all right, 2012, too -- we talked about the question of whether technology is going to take all our jobs. Singapore Is Pioneering Vertical-Farming Technology. ButtonMasher: AI takes on humans to create video game - tech - 02 January 2014.

Automated Science, Deep Data, and the Paradox of Information. Commercial quantum computer leaves PC in the dust - physics-math - 10 May 2013. Robots Are Taking Our Jobs, And We Will Take Their Money. Robots Are Taking Over the Office. The Robot Reality: Service Jobs Are Next to Go. Bluebrain. Researchers say AI prescribes better treatment than doctors. Japan to field test rehabilitation robots. iRobot proposes 3-D printing with less human intervention.