Marathi Film Kanha to be honored at David Lean Cinema in London. Released on Dahi Handi, Avadhoot Gupte’s ‘Kanha’ has already emerged triumphant and continues to perform impressively at the Box Office. 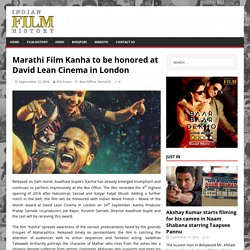 The film recorded the 4th highest opening of 2016 after Natsamrat, Sairaat and Katyar Kaljat Ghusli. Adding a further notch in the belt, the film will be honoured with Indian Movie Friend – Movie of the Month Award at David Lean Cinema in London on 24th September. Kanha Producer Pratap Sarnaik, co-producers Joe Rajan, Purvesh Sarnaik, Director Avadhoot Gupte and the cast will be receiving this award. The film “Kanha” spreads awareness of the various predicaments faced by the govinda troupes of Maharashtra. Released timely on Janmashtami, the film is catching the attention of audiences with its action sequences and fantastic acting. Kanha is produced by Pratap Sarnaik, co-produced by Joe Rajan and Purvesh Sarnaik. 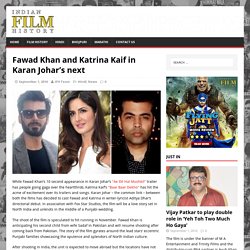 Karan Johar – the common link – between both the films has decided to cast Fawad and Katrina in writer-lyricist Aditya Dhar’s directorial debut. In association with Fox Star Studios, the film will be a love story set in North India and unknots in the middle of a Punjabi wedding. Aamir Khan to play a cameo in ‘Secret Superstar’ Priyanka Chopra Unveils first poster of her upcoming Marathi Production. 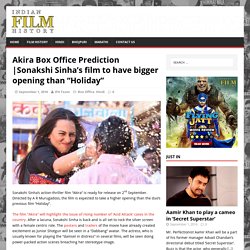 Directed by A R Murugadoss, the film is expected to take a higher opening than the duo’s previous film “Holiday”. The film “Akira” will highlight the issue of rising number of ‘Acid Attack’ cases in the country. After a lacuna, Sonakshi Sinha is back and is all set to rock the silver screen with a female centric role. Happy Ending 2014. LUV…..Phir Kabhie 2014. Kaash Tum Hote 2014. Movie Details. Badlapur Boys 2014. Life Mein Twist Hai 2014. Room – The Mystery 2014. Vaibhav Tatwawdi, Gauri Nalawade.

The festivities in Maharashtra are on. 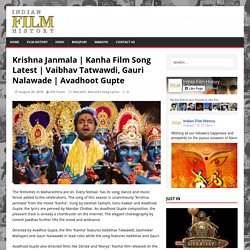 Every festival has its song, dance and music fervor added to the celebrations. The song of this season is unanimously “Krishna Janmala” from the movie “Kanha”. Sung by Vaishali Samant, Sonu Kakkar and Avadhoot Gupte, the lyrics are penned by Mandar Cholkar. An Avadhoot Gupte composition, the pleasant track is already a chartbuster on the internet. The elegant choreography by Umesh Jaadhav further lifts the mood and ambiance. 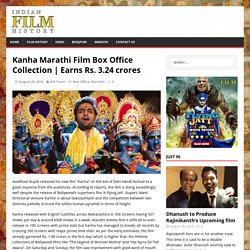 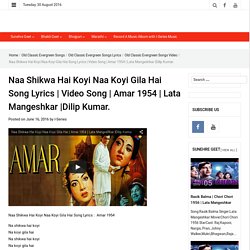 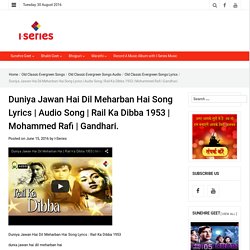 ‘Rada’ new song from ‘Banjo’ released. The much anticipated song ‘Rada’ from Riteish Deshmukh’s upcoming musical drama ‘Banjo’ is out, and the track is full of vim and vigor. 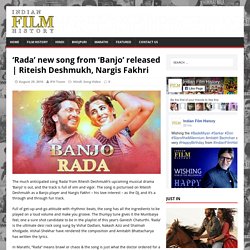 The song is picturised on Riteish Deshmukh as a Banjo player and Nargis Fakhri – his love interest – as the DJ, and it’s a through and through fun track. Full of get-up-and-go attitude with rhythmic beats, the song has all the ingredients to be played on a loud volume and make you groove. The thumpy tune gives it the Mumbaiya feel, one a sure shot candidate to be in the playlist of this year’s Ganesh Chaturthi. ‘Rada’ is the ultimate desi rock song sung by Vishal Dadlani, Nakash Aziz and Shalmali Kholgade.

Vishal-Shekhar have rendered the composition and Amitabh Bhattacharya has written the lyrics. Salman Khan’s Tiger Zinda Hai will be on the lines of Matt Damon’s Bourne Series. Superstar Salman Khan will be seen returning as India’s most wanted RAW agent for the sequel to Ek Tha Tiger. 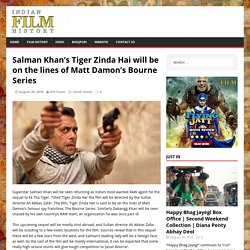 Titled ‘Tiger Zinda Hai’ the film will be directed by the Sultan director Ali Abbas Zafar. The film, ‘Tiger Zinda Hai’ is said to be on the lines of Matt Damon’s famous spy franchise, The Bourne Series. Shah Rukh Khan to play a womaniser in Imtiaz Ali’s “The Ring” We have seen SRK essay different shades of roles in his long career. 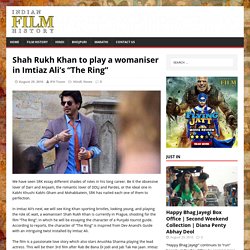 Be it the obsessive lover of Darr and Anjaam, the romantic lover of DDLJ and Pardes, or the ideal one in Kabhi Khushi Kabhi Gham and Mohabbatein, SRK has nailed each one of them to perfection. In Imtiaz Ali’s next, we will see King Khan sporting bristles, looking young, and playing the role of, wait, a womaniser! Best of lata Mangeshkar Hits Songs.

Lata Mangeshkar , the nightingale of India started her playback singing career in the year 1942 and is an occasional music-composer. She is one of the best-known and most respected playback singers in India and has been in the industry spanned over seven decades. She has recorded songs for over a thousand Hindi films . She has sung songs in over thirty-six regional Indian languages and foreign languages, though primarily in Marathi and Hindi. The eldest sibling of singers Asha Bhosle, Hridaynath Mangeshkar, Usha Mangeshkar and Meena Mangeshkar. Lata Mangeshkar has won the Highest Award in Indian Cinema , the Dadasaheb Phalke Award, bestowed on her in 1989 by the Government of India. Best of Asha Bhosle Hits Songs. Zara Sikh Lo Ankhiyo Sharmana Song Lyrics.

Zara Sikh Lo Ankhiyo Sharmana Song Lyrics : Vachan 1955. Rajkummar Rao to be seen opposite Nargis Fakri in an upcoming Hollywood film ‘5 Weddings’ National Award Winning actor Rajkummar Rao, who is known for his performances in Aligarh, Kaipoche, and Queen, will now be seen climbing another milestone in his career. Buzz is that the actor who was last seen in ‘Aligarh’, will now be seen in a Hollywood film titled ‘5 Weddings’, directed by Namrata Singh Gujral. The film is said to be shot in Chandigarh and Los Angeles. ‘5 Weddings’ will also feature Nargis Fakri, Bo Derek and Candy Clark in the lead roles.

Talking about his role, Rajkummar said that Namrata Singh saw some of his work on Netfilx and some other platforms, and her production team approached him to play the leading man ‘Harbhajan’ who is a scornful cop in the Punjab Police. The cop is assigned for an entourage with Nargis’s character, an Indo-American Girl who has flown down to India to do a magazine feature on Indian weddings. Dinesh Lal Yadav , Aamrapali Dubey. Vaibbhav Tatwawdi, Gashmeer Mahajani. Avadhoot Gupte released his new film “Kanha” on the eve of Dahi Handi festival to a good response from the audiences. According to reports, the film had decent occupancy on the first day despite the release of Bollywood’s superhero film ‘A Flying Jatt’. Gupte’s latest directorial venture ‘Kanha’ is about Gokulashtami and the competition between two Govinda pathaks to build the tallest human pyramid in terms of height.

Kanha released with English Subtitles across Maharashtra in 356 Screens having 927 shows per day & around 6500 shows in a week. Vaibbhav Tatwawdi, Gashmeer Mahajani. Vaibhav Tatwawdi, Gauri Nalawade. It’s confirmed. Shahrukh Khan’s “Raees” to clash with Hrithik Roshan’s “Kaabil” It looks like all energies and struggles to dodge the biggest clash of 2017 have gone down in drain as Rakesh Roshan’s home production “Kaabil” starring Hrithik Roshan is confirmed to clash with Rahul Dholakia’s SRK starrer “Raees.” Earlier in 2015, Shahrukh Khan’s “Raees” evaded a clash with Salman Khan’s “Sultan” on Eid holiday, after which they deferred the release date of the film to Republic Day. But the film has now landed up in a direct encounter with Hrithik Roshan’s “Kaabil”, for which Shahrukh Khan even visited the house of Rakesh Roshan, father of Hrithik and producer of “Kaabil”, to discuss prospects of dodging the clash.

Rakesh Roshan had already expressed his denial over postponing the release date of “Kaabil” due to commitments. On whether both teams could reach to a mutual understanding, Roshan said, “Shah Rukh is a nice person and we are very good friends. Sonakshi Sinha’s Akira will have Akshay Kumar playing a cameo. Whatever Akshay Kumar touches turns to gold. The Khiladi of Bollywood is considered the most bankable actor for his success rate. With back to back hits like Airlift, Housefull 3 and Rustom in 2016, the superstar is simply unstoppable. And, unsurprisingly, the filmmakers are eager to cash in on his invincibility by signing films at a fast pace. Baldev Singh Bedi’s “Love Day – Pyaar Ka Din”, to be releasing soon. Friendship, like in life, is the flavor of all seasons in Bollywood with filmmakers continually bewildered by the charm it allures. Year after year, we see movies shaken and stirred out by the tinsel town; and the trend has no intentions to fade away because of the relatibility factor it has with every generation.

After your parents, if there is any relationship which influences your life, it’s friendship. Right from school to your professional career, one spends more time in the company of friends than with family. After the success of Dil Chahta Hai, Zindagi Na Milegi Dobara and 3 Idiots, Baldev Singh Bedi is presenting another tale of brotherhood – of friendship – in his soon-to-be-releasing, “Love Day – Pyaar Ka Din”. A Flying Jatt Box Office Collection Weekend. Tiger Shroff’s “A Flying Jatt” seems to be finding it difficult to fly high at the Box Office much like Aman’s acrophobia in the movie.

The Remo D’ Souza directed film was released with a big ordeal, but has not lived upto the expectations yet. The Tiger Shroff and Jacqueline Fernandez starrer superhero film, ‘A Flying Jatt’ released on Janmashtami with mixed reviews. The first day occupancy for the film hovered around 25-30 percent at most cinema halls. According to trade analyst, Taran Adarsh, the opening day collections of the movie stand at Rs. 7.10 crore. The second day was not appropriate, either. Saturday came as a slight reprieve with the film stepping up a little raking in collection of Rs.7.35 crore. Made at a budget of Rs. 45 crore, the film has reached half way to recover its cost but needs a big boost from the kids to earn the tag of a hit.