Incident Reports: The Ultimate Guide. An incident report is completed any time an incident or accident occurs in the workplace. 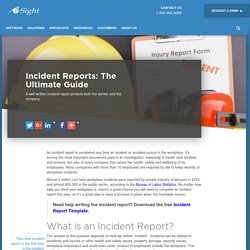 It’s among the most important documents used in an investigation, especially in health care facilities and schools, but also at every company that values the health, safety and wellbeing of its employees. Many companies with more than 10 employees are required by law to keep records of workplace incidents. Almost 3 million non-fatal workplace incidents were reported by private industry employers in 2015 and almost 800,000 in the public sector, according to the Bureau of Labor Statistics. 31 Ways to Prevent and Detect Payroll Fraud. 41 Types of Fraud and How to Detect and Prevent Them. Employee fraud is one of the most expensive liabilities of an organization. 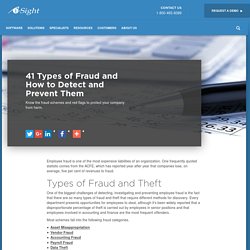 One frequently quoted statistic comes from the ACFE, which has reported year after year that companies lose, on average, five per cent of revenues to fraud. 44 Investigation Interview Questions for the Complainant, Subject and Witnesses. Knowing what questions to ask in an investigation interview comes with experience. 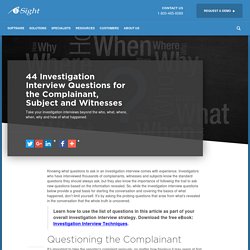 Investigators who have interviewed thousands of complainants, witnesses and subjects know the standard questions they should always ask, but they also know the importance of following the trail to ask new questions based on the information revealed. So, while the investigation interview questions below provide a great basis for starting the conversation and covering the basics of what happened, don’t limit yourself.

39 Tips for Conducting a Sexual Harassment Investigation. Sexual harassment allegations are among the most sensitive and tricky investigations that a company must conduct. 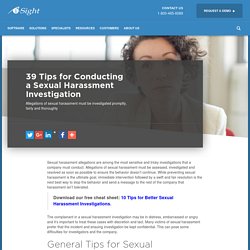 Allegations of sexual harassment must be assessed, investigated and resolved as soon as possible to ensure the behavior doesn’t continue. While preventing sexual harassment is the ultimate goal, immediate intervention followed by a swift and fair resolution is the next best way to stop the behavior and send a message to the rest of the company that harassment isn’t tolerated. Download our free cheat sheet: 10 Tips for Better Sexual Harassment Investigations. 50 Free or Cheap Tools for Investigators. Today’s investigators have at their fingertips a plethora of useful tools and resources, from software and smartphone apps to digital research resources, state-of-the-art communications technology and nifty spy gadgets. 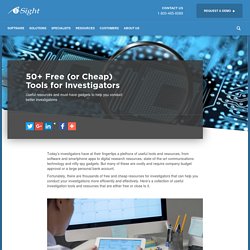 But many of these are costly and require company budget approval or a large personal bank account. Fortunately, there are thousands of free and cheap resources for investigators that can help you conduct your investigations more efficiently and effectively. Ethics Hotline. Comply with International Regulations A well managed ethics hotline helps you uncover problems early, address them quickly and maintain a safe and ethical workplace. 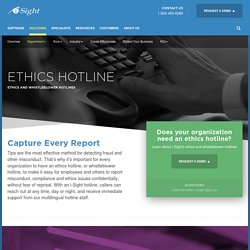 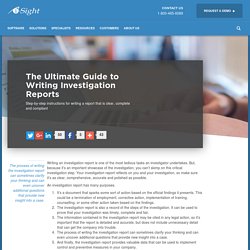 An investigation report has many purposes. It’s a document that sparks some sort of action based on the official findings it presents. We’ve compiled a step-by-step framework for writing an investigation report that will meet the needs of your supervisors, colleagues and anyone else who may require it. 15 Types of Evidence and How to Use Them in Investigations. The ability to gather and analyze different types of evidence is one of the most important competencies for anyone who conducts investigations. 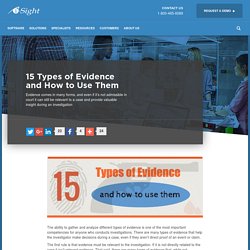 There are many types of evidence that help the investigator make decisions during a case, even if they aren’t direct proof of an event or claim. The first rule is that evidence must be relevant to the investigation. Top 20 Tips for Preventing Data Theft. If you have an extra $3.8 million to spare, you don’t need to worry about preventing data theft. 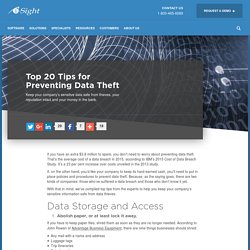 That’s the average cost of a data breach in 2015, according to IBM’s 2015 Cost of Data Breach Study. It’s a 23 per cent increase over costs unveiled in the 2013 study. If, on the other hand, you’d like your company to keep its hard-earned cash, you’ll need to put in place policies and procedures to prevent data theft. Because, as the saying goes, there are two kinds of companies: those who’ve suffered a data breach and those who don’t know it yet.

With that in mind, we’ve compiled top tips from the experts to help you keep your company’s sensitive information safe from data thieves. Data Storage and Access Abolish paper, or at least lock it away. If you have to keep paper files, shred them as soon as they are no longer needed. “Not everyone in the company needs access to everything. Find out what you need to protect. “Have an audit or assessment on your data. Need a quick reference? Technology. 101+ OSINT Resources for Investigators. When researching investigative subjects, the first stop for an investigator is usually the internet. 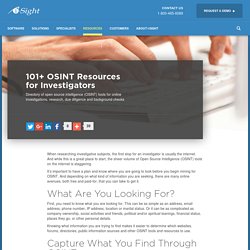 And while this is a great place to start, the sheer volume of Open Source Intelligence (OSINT) tools on the internet is staggering. How to Conduct a Workplace Investigation: Step-By-Step. Many HR, compliance and security investigators don’t receive targeted training on how to conduct a workplace investigation from start to finish. Training may cover investigation planning, conducting interviews, gathering evidence and other aspects of the investigative process, but most often doesn’t provide an overall blueprint for conducting an entire workplace investigation.

This step-by-step article will take you from the initial report of misconduct to the conclusion and final investigation report, with examples and guidance to ensure your investigation follows best practices. Initial Report and Deciding Whether to Investigate Failure to investigate misconduct that should be investigated can have dire consequences for the company. When a complaint or report of wrongdoing is received via a company’s hotline, web form or through any other means, the company is obligated to take the report seriously and act on it quickly.