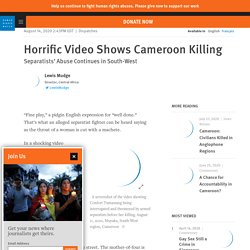 That’s what an alleged separatist fighter can be heard saying as the throat of a woman is cut with a machete. Www.voanews. YAOUNDE - Military forces arrested several hundred people in Cameroon’s North West and South West regions this week as they searched for those behind the killing of at least 13 civilians in the regions, including aid workers. 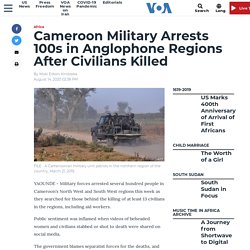 Public sentiment was inflamed when videos of beheaded women and civilians stabbed or shot to death were shared on social media. The government blames separatist forces for the deaths, and the U.S. Embassy in Yaounde on Friday condemned what it called the horrific and senseless attacks by armed separatist fighters. However, Prince Ekosso, president of the opposition United Socialist Democratic Party, says the arrests are an overreaction to the killings. "The people of South West and North West cannot continue to suffer like this," Ekosso said. Twenty-seven-year-old Prudence Egbe said the military raided several neighborhoods in Muyuka, a southwestern town, on Thursday.

"They tortured him," Egbe said. "The populations are reacting positively now," Bilai said. Www.voanews. YAOUNDE - In Cameroon, there has been widespread condemnation of recent barbaric violence against civilians in the country's troubled western regions. 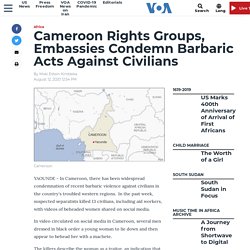 In the past week, suspected separatists killed 13 civilians, including aid workers, with videos of beheaded women shared on social media. In video circulated on social media in Cameroon, several men dressed in black order a young woman to lie down and then appear to behead her with a machete. The killers describe the woman as a traitor, an indication that they are Anglophone separatists. Information on atrocities in Cameroon. Cameroon: Ensure Independent Probe of Reporter’s Death. Transparency, Accountability Needed for ‘Wazizi’ Case Cameroon’s government should ensure that the investigation into a journalist’s enforced disappearance and death in military custody is independent, effective, thorough, and impartial, four Cameroonian and six international organizations said today. 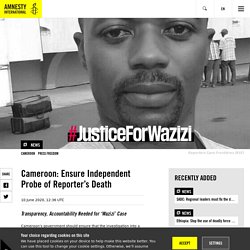 United Nations (UN) Security Council members should urge accountability for the death of the journalist, Samuel Ajiekah Abuwe, known as Wazizi, when they are briefed on the situation in Cameroon during their June 12, 2020 meeting with the UN Office of Central Africa (UNOCA). The police arrested Wazizi, 36, an English-speaking journalist at the privately owned broadcaster, Chillen Muzik and TV (CMTV), on August 2, 2019 in Buea, South-West region, and transferred him to a military-run facility in the same city on August 7. The French Ambassador to Cameroon told the media on June 5 that President Paul Biya had assured him that an investigation will be opened into the Wazizi’s death. Cameroon: Five years of agony for families of 130 disappeared. New Amnesty Campaign to break the deafening silence surrounding this caseA top army officer under investigation but appointed ministry advisor Amnesty International is launching a new campaign urging Cameroon’s authorities to investigate the enforced disappearance of more than 130 men and boys, who were rounded up from their villages more than five years ago and have not been heard from since. 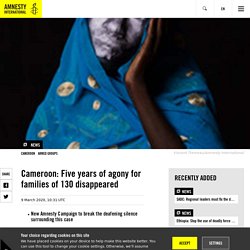 On 27 December 2014, Cameroonian security forces arbitrarily arrested over 200 men and boys in Magdémé and Doublé, two villages in the Far-North region, during a violent raid in which eight people were killed including a child and more than 70 buildings burned down. At least 130 of them are still missing. The campaign, “Where are they? Cameroon: Rise in killings in Anglophone regions ahead of parliamentary elect... Armed separatists continue abductions and killings Army burned dozens of houses, Amnesty remote sensing analysis confirms more than 50 in two areas As of last December, 679,000 people were displaced A surge in violence meted out by the Cameroon military in recent weeks, has led to dozens of killings and thousands of new displacements in several areas across the Anglophone regions, Amnesty International said today, ahead of parliamentary elections due to take place on Sunday 9 February. 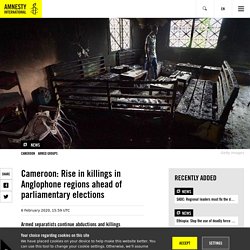 Amid several reports of villages razed to the ground, Amnesty International's remote sensing analysis confirms the burning of more than 50 houses in Babubock and neighbouring villages of Bangem in the South-West around 14 January. These acts by the army, including killings of villagers, are serious human rights violations. “In recent weeks, brutal military operations have been conducted while crimes committed by armed separatists continue unabated. Villages destroyed and killings by the military. Cameroon: Nearly 60 opposition members tortured by security forces. They were forced to walk like “ducks in the mud”Traumatized and shocked by the ill-treatmentDetention of Maurice Kamto and some of his supporters reaches sixth month anniversary on Sunday Authorities in Cameroon should promptly and independently investigate the severe beatings and ill-treatment that 59 opposition supporters -including six women- were allegedly subjected to during their questioning at the State Secretariat for Defense (SED), Amnesty International said today. 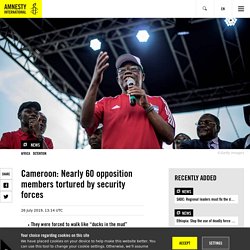 Before releasing them, security forces beat them with sticks and forced them into humiliating positions. Amnesty International also calls for the immediate release of their leader Maurice Kamto and more than 100 other supporters arbitrarily detained six months to the day solely for peaceful participation in protests. Like many other unofficial detention centres across Cameroon, the SED has a reputation for torturing detainees. These repressive and brutal tactics to silence dissent must end.