RomanianCultureTours. Bucovina is one of the few regions where the art of egg painting is among the most lively and well preserved traditions. 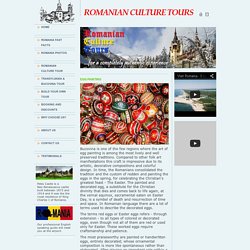 Compared to other folk art manifestations this craft is impressive due to its artistic, decorative compositions and colorful design. Romania Local Customs - Culture. A romanian wedding: traditions and superstitions - Learn about kidnapping the bride, money gifts and the vow of submission - Tourist in Romania. A wedding in Romania can be one of the most authentic and inspiring way to understand and see, with your own eyes, how this eastern european country is an unique mix of old and new, joined together in times when cultural identity tends to fade as globalisation takes its place. 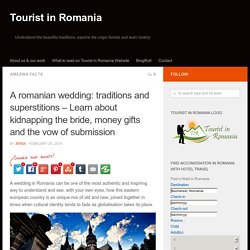 In this post I will describe some Romanian wedding traditions as they are kept today by young couples getting married. In Romania, weddings usually go like this: the couple goes to the city hall in the morning to get legally married, then back at home to get all dressed up and, in the evening, they go to church to get married in front of God. From the church, everybody goes to the wedding party. Kidnapping a bride at a Romanian wedding One of the most interesting customs at a wedding is to kidnap te bride around midnight.

ROMANIA - Traditions and Folklore - Official Travel and Tourism Information. The countryside is the heart and soul of Romania, where peasant culture remains a strong force and medieval life prevails, as it does nowhere else in Europe. 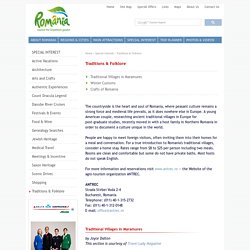 A young American couple, researching ancient traditional villages in Europe for post-graduate studies, recently moved in with a host family in Northern Romania in order to document a culture unique in the world. People are happy to meet foreign visitors, often inviting them into their homes for a meal and conversation. For a true introduction to Romania's traditional villages, consider a home stay. Rates range from $8 to $25 per person including two meals. Rooms are clean and comfortable but some do not have private baths. For more information and reservations visit www.antrec.ro — the Website of the agro-tourism organization ANTREC. ANTREC Strada Stirbei Voda 2-4 Bucharest, Romania Telephone: (011) 40-1-315-2732 Fax: (011) 40-1-312-0148 E-mail: office@antrec.ro Traditional Villages in Maramures.

Customs and traditions in Romania. The world in which the Romanian peasant lives has always been rich in customs, which seem like picturesque folk exhibitions for the untrained eye of an outsider. 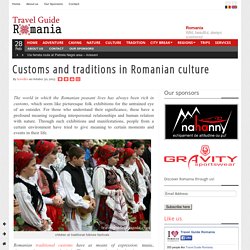 For those who understand their significance, these have a profound meaning regarding interpersonal relationships and human relation with nature. Through such exhibitions and manifestations, people from a certain environment have tried to give meaning to certain moments and events in their life. children at traditional folklore festivals. Spring Traditions 3: Mucenici & 44 shots. After Women’s day on the 8th, we Romanians have other traditions but this time related to men. 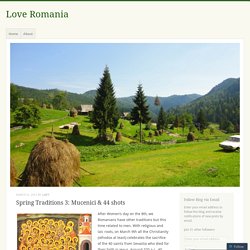 With religious and laic roots, on March 9th all the Christianity (othodox at least) celebrates the sacrifice of the 40 saints from Sevastia who died for their faith in Jesus. Around 320 a.c., 40 soldiers were captured in order to give up on their Christian faith. As they refused, they were undressd and force to go into a freezing lake. But then, instead of dying they started praying to God who saved them. Romanian Traditions - Tours of Romania. Maybe no other thing can better define the spirit of a people than its ancient traditions and customs. 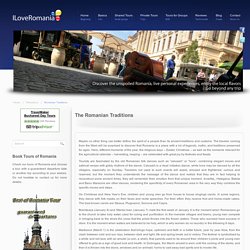 The traveler coming from the West will be surprised to discover that Romania is a place with a lot of legends, myths, and traditions preserved for ages. Here, different moments of the year, the religious days – Easter, Christmas – as well as the moments relevant for the agricultural calendar – harvesting, reaping – are celebrated with great joy by festivals and feasts. Tourists are fascinated by the old Romanian folk dances such as “calusarii” or “hora”- combining elegant moves and satirical verses with giddy rhythms of the dance. Calusarii is a ritual initiation dance, while hora may be danced by all the villagers, especially on Sunday.

On Christmas and New Year’s Eve, children and young men go from house to house singings carols. Boboteaza (January 6) and Sfantul Ioan (January 7) mark the first week of January. The oldest traditions in Romania. Everywhere you go in this world you come across strange activities and events that you might not understand but that are really important to the people involved. 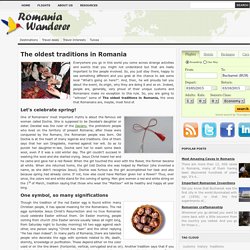 So, you just stay there, happy to see something different and you grab at the chance to ask some local “What’s going on here?”. Romanian Holidays and Traditions Year-Round. In Romania, as in most other Christian countries, Christmas and Easter are the most important holidays of the year. 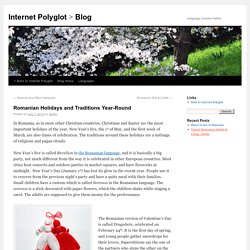 New Year’s Eve, the 1st of May, and the first week of March, are also times of celebration. The traditions around these holidays are a mélange of religious and pagan rituals. New Year’s Eve is called Revelion in the Romanian language, and it is basically a big party, not much different from the way it is celebrated in other European countries. Most cities host concerts and outdoor parties in market squares, and have fireworks at midnight. New Year’s Day (January 1st) has lost its glow in the recent year. The Romanian version of Valentine’s Day is called Dragobete, celebrated on February 24th.

About Romania - Romanian Cuisine. The rich and tasty food in Romania is an influence of foreign settlers that have occupied the land in the past. 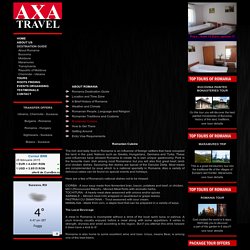 Nations such as Greeks, Hungarians, Germans and Turks. These past influences have allowed Romania to create its is own unique gastronomy. Pork is the favourite main dish among most Romanians but you will also find great beef, lamb and chicken dishes. Savouring fish dishes are typical of the Danube Delta. Most meals are complemented by soup which is a national specialty in Romania. Here are a few of Romania's national dishes not to be missed: CIORBA - A sour soup made from fermented bran, bacon, potatoes and beef, or chicken.