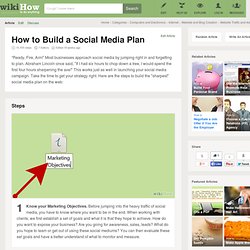 Most businesses approach social media by jumping right in and forgetting to plan. Abraham Lincoln once said, "If I had six hours to chop down a tree, I would spend the first four hours sharpening the axe! " This works just as well in launching your social media campaign. Take the time to get your strategy right. Ad Steps 1Know your Marketing Objectives. University Communications. Before setting up your social networking site, it’s important to have clear goals and expectations. 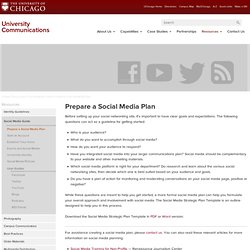 The following questions can act as a guideline for getting started: Strategic plan. Social Media Strategy Guide. How to Create a Social Media Marketing Plan From Scratch. 188 Flares Filament.io 188 Flares × When I went rock climbing for the first time, I had no idea what I was doing. 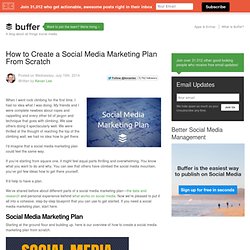 My friends and I were complete newbies about ropes and rappelling and every other bit of jargon and technique that goes with climbing. We saw others doing it spectacularly well. We were thrilled at the thought of reaching the top of the climbing wall; we had no idea how to get there. Global Billionaires Interested in Philanthropy - Census. The world’s 2,325 billionaires, on average, donate just over US$100 million cumulatively over their lifetimes to philanthropic causes, according to a global wealth census. 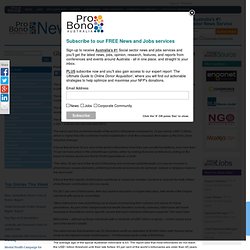 This is equivalent to just three per cent of their net worth – more than the average billionaire’s real estate holdings. The Wealth-X and UBS Billionaire Census 2014 shows that 51.9 per cent of billionaires, including those in Australia, say they have an interest in philanthropy but in reality many more are actively involved in giving. The report found that 155 new billionaires were minted in 2014, pushing the global population to a record 2,325 – a seven per cent rise from 2013. The report said the combined wealth of the world’s billionaires increased by 12 per cent to US$7.3 trillion, which is higher than the combined market capitalisation of all the companies that make up the Dow Jones Industrial Average.

“Many billionaires view philanthropy as a means of preserving their cultures and values for future generations. Maximising Your Mission Through Your Social Media Presence. A year on from publishing Westpac’s Community Confidence Index, National Marketing Manager, Lali Wiratunga reflects on the opportunities For Purpose organisations have to enhance their social media presence. 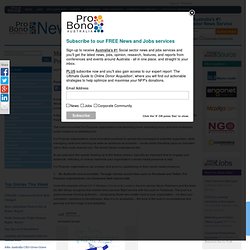 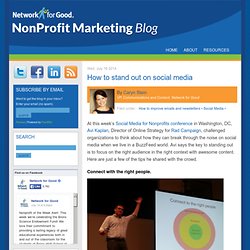 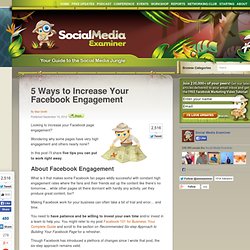 Wondering why some pages have very high engagement and others nearly none? In this post I’ll share five tips you can put to work right away. Experiment: What Percentage of Facebook Fans REALLY Saw Your Post? First of all, let me be clear about something: I really don’t care much about Facebook Reach. 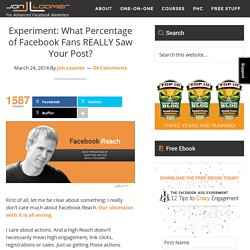 Our obsession with it is all wrong. I care about actions. And a high Reach doesn’t necessarily mean high engagement, link clicks, registrations or sales. Just as getting those actions doesn’t necessarily mean high Reach. Additionally, when it comes to Reach I care more about how many people are being reached in a given day, week or month — the single post isn’t that important. But since people care so much about the Reach metric, I want to be sure you are at least measuring it properly. 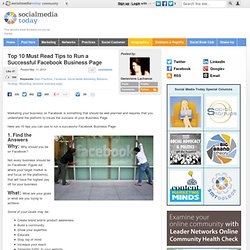 Here are 10 tips you can use to run a successful Facebook Business Page: 1. Find the Answers. Here's What You Should Post on Your Facebook Page to Get More Likes. Facebook page managers spend A LOT of time trying to figure out what to post on their page(s). 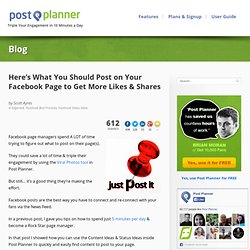 They could save a lot of time & triple their engagement by using the Viral Photos tool in Post Planner. But still… it’s a good thing they’re making the effort. Facebook posts are the best way you have to connect and re-connect with your fans via the News Feed. 10 Tips for Posting on Your Brand's Facebook Page.

Ekaterina Walter is a social media strategist at Intel. She is a part of Intel’s Social Media Center of Excellence and is responsible for company-wide social media enablement and corporate social networking strategy. Once your brand is on Facebook, the question becomes: How you engage those fans and sustain a meaningful online dialogue with your customers. Facebook fans will only want to engage with us if we serve up relevant content and truly participate. We also forget about EdgeRank — Facebook’s News Feed algorithm that helps display “relevant” stories. The News Feed only displays a small subset of stories generated by the friends and brands users engage with the most. Let’s explore ways we can create updates that are optimized for the News Feed and engagement. 1. Don’t automatically feed your blog posts or your Twitter updates into your Page. Don’t share the exact same content across all networks (Facebook, Twitter, YouTube, etc.) in exactly the same format.