The Triumphs and Failures of Feminism. Some of the worst feminists are men. 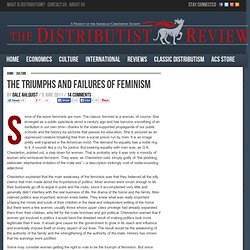 The classic feminist is a woman, of course. She emerged as a public spectacle about a century ago and has become something of an institution in our own time—thanks to the state-supported propaganda of our public schools and the history-by-pictures that passes for education. She is pictured as an oppressed creature breaking free from a social prison run by men. It is an image pretty well ingrained in the American mind.

The demand for equality has a noble ring to it. Chesterton explained that the main weakness of the feminists was that they believed all the silly claims that men made about the importance of politics. Some may consider women getting the right to vote to be the triumph of feminism. And there are still men who fall for it. Though abortion is a triumph for feminism, it is not a triumph for women. Chesterton called feminism the hatred of all things feminine. Tags: American Chesterton Society, Dale Ahlquist, feminism, G.K. The Sins of the Saint: Racism in GK Chesterton. I’ve been reading this topic with great interest, particularly since I was indirectly responsible for starting it! 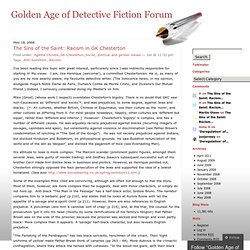 My views: I am, like Henrique (welcome!) , a committed Chestertonian. He is, as many of you are by now wearily aware, my favourite detective writer. (The Innocence ranks, in my opinion, alongside Hugo’s Notre Dame de Paris, Dumas’s Comte de Monte Cristo, and Dickens’s Our Mutual Friend.) Indeed, I seriously considered doing my Master’s on him. Mike [Grost] (whose work I respect) overstates Chesterton’s bigotry. His attitude to Jews is more complex. Some of the examples Mike cited are convincing, although are often not enough to mar the story. “The Perishing of the Pendragons” has two black servants, henchmen of the villain. “The God of the Gongs” is famous for Nigger Ned, the black boxer who is also head of a Voodoo cult. Why I Am A Catholic. The difficulty of explaining “why I am a Catholic” is that there are ten thousand reasons all amounting to one reason: that Catholicism is true. 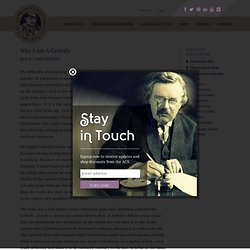 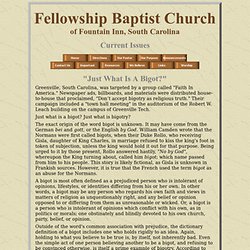 " Greenville, South Carolina, was targeted by a group called "Faith In America. " Newspaper ads, billboards, and materials were distributed house-to-house that proclaimed, "Don’t accept bigotry as religious truth. " Their campaign included a "town hall meeting" in the auditorium of the Robert W. Leach building on the campus of Greenville Tech. Just what is a bigot? The exact origin of the word bigot is unknown. A bigot is most often defined as a prejudiced person who is intolerant of opinions, lifestyles, or identities differing from his or her own. Outside of the word's common association with prejudice, the dictionary definition of a bigot includes one who holds rigidly to an idea. Bigot is also used as a term of derision to imply contempt or disapproval. It’s much easier to call someone a bigot than to consider their arguments. Josh Billings once noted: "Wisdom has never made a bigot, but learning has.