California Sleepwalks into Water Crisis. When California’s Governor Jerry Brown ordered mandatory reductions in water use last week, it came as no surprise in a state that’s experienced an extended and unprecedented drought. 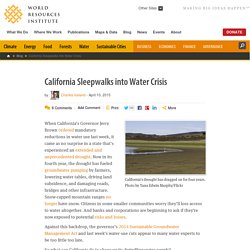 Now in its fourth year, the drought has fueled groundwater pumping by farmers, lowering water tables, driving land subsidence, and damaging roads, bridges and other infrastructure. Snow-capped mountain ranges no longer have snow. Citizens in some smaller communities worry they’ll loss access to water altogether. And banks and corporations are beginning to ask if they’re now exposed to potential risks and losses. Against this backdrop, the governor’s 2014 Sustainable Groundwater Management Act and last week’s water-use cuts appear to many water experts to be too little too late. Instagram. J on Instagram: “Blooming bougainvillea in Alameda. #Alameda #bougainvillea #California” Warmer, drier climate altering forests throughout California. Historical California vegetation data that more than once dodged the dumpster have now proved their true value, documenting that a changing forest structure seen in the Sierra Nevada has actually happened statewide over the past 90 years. 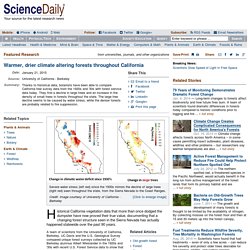 A team of scientists from the University of California, Berkeley, UC Davis and the U.S. Geological Survey compared unique forest surveys collected by UC Berkeley alumnus Albert Wieslander in the 1920s and '30s with recent U.S. Forest Service data to show that the decline of large trees and increase in the density of smaller trees is not unique to the state's mountains. "Older, larger trees are declining because of disease, drought, logging and other factors, but what stands out is that this decline is statewide," said study leader Patrick McIntyre, who began the research while a postdoctoral fellow at UC Berkeley and now manages biodiversity data for the California Department of Fish and Wildlife. 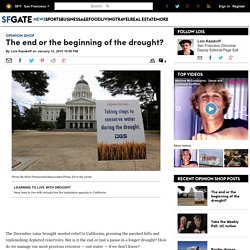 The December rains brought needed relief to California, greening the parched hills and replenishing depleted reservoirs. But is it the end or just a pause in a longer drought? How do we manage our most precious resource — our water — if we don’t know? You treat drought as a way of life, not an event to just get through, said Jane Doolan, an Australian who helped that nation craft the water policies that led Australia through a 20-year drought. “People were highly engaged around the drought and willing to accept that this was their future,” Doolan said. 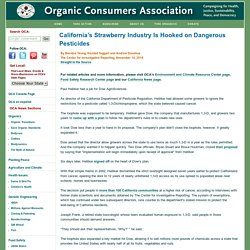 Paul Helliker had a job for Dow AgroSciences. As director of the California Department of Pesticide Regulation, Helliker had allowed some growers to ignore the restrictions for a pesticide called 1,3-Dichloropropene, which the state believed caused cancer. The loophole was supposed to be temporary. Helliker gave Dow, the company that manufactures 1,3-D, and growers two years to come up with a plan to follow his department's rules or to create new ones. It took Dow less than a year to hand in its proposal. Dow asked that the director allow growers across the state to use twice as much 1,3-D in a year as the rules permitted. Six days later, Helliker signed off on the heart of Dow's plan. "They should ask their representatives, 'Why? ' The chemical is the third most heavily used pesticide in California. 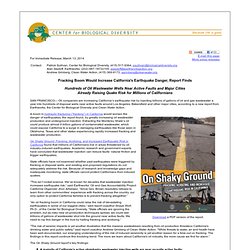 Iquitoz : Point Reyes Lighthouse bound... California Drought Spurs Dangerous Attack on Endangered Species Act. From Wildlife Promise Right now, all anyone can talk about in California is the drought. 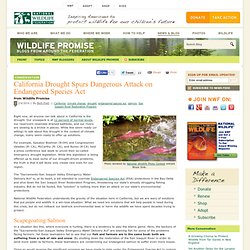 Our snowpack is at 12 percent of normal levels, our reservoirs resemble drained bathtubs, and our rivers are slowing to a trickle in places. While few seem ready (or willing) to talk about this drought in the context of climate change, many seem ready to offer up solutions. For example, Speaker Boehner (R-OH) and Congressmen Valadao (R- CA), McCarthy (R- CA), and Nunes (R-CA) held a press conference last week to unveil their so-called emergency drought legislation. While this legislation is being offered up to ease some of our drought-driven problems, the truth is that it will likely only create new ones for our region.

National Wildlife Federation understands the gravity of the situation here in California, but we are wary of solutions that put people and wildlife in a win-lose situation. Scapegoating Salmon. California's "exceptional drought" won't get better any time soon. Photo by Justin Sullivan/Getty Images The epic California drought isn’t through breaking records. 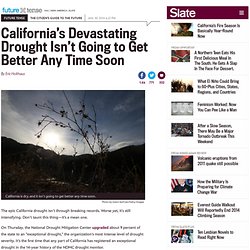 Worse yet, it’s still intensifying. Don’t taunt this thing—it’s a mean one. On Thursday, the National Drought Mitigation Center upgraded about 9 percent of the state to an “exceptional drought,” the organization’s most intense level of drought severity. 25501516t?&akid=.7579753.