RRR resumes post lockdown. It is a treat for movie lovers when unique combinations come together in making a movie. 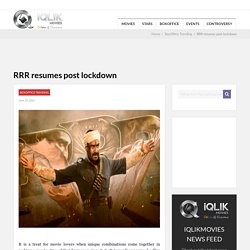 One of that buzz ever since S. S. Rajamouli announced a film with Ram Charan and Jr.N.T.R. in March 2018. It is the Telugu movie RRR. Fans have been waiting for this combination to hit theatres and celebrate their favorite actor’s work. The idea behind Telugu movie RRR In an interview before the pandemic era, in March 2019, S. RRR crew and their artistry. RASHMIKA'S 18-HOUR-REHEARSALS FOR ALLU ARJUN! Peddanna Review and Rating. 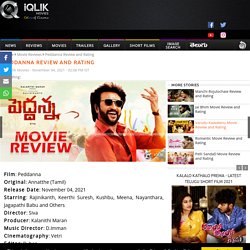 Veeranna loves Kanakam a lot and fixes marriage to her. However, on the wedding day, Kanakam elopes. After six months, Veeranna comes to know that Kanakam is in a lot of problems in Kolkata. Peddanna Review and Rating. OSCARS 2022: MANDELA, NAYATTU, SARDAR UDHAM AND OTHERS IN CONSIDERATION. RRR resumes post lockdown. Top 5 upcoming telugu movies of 2021 to watch out for. The pandemic has taken a toll on everyone, and the movie fraternity is not an exception. 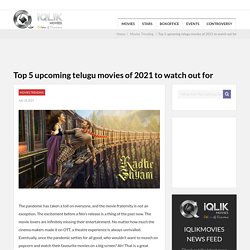 The excitement before a film’s release is a thing of the past now. The movie lovers are infinitely missing their entertainment. No matter how much the cinema makers made it on OTT, a theatre experience is always unrivalled. Eventually, once the pandemic settles for all good, who wouldn’t want to munch on popcorn and watch their favourite movies on a big screen? Ah! Taapsee to make Tollywood comeback with Mishan impossible. Actress Taapsee to make a comeback in the Telugu movie industry with Mishan Impossible. 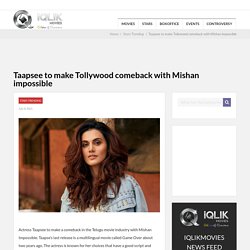 Taapse’s last release is a multilingual movie called Game Over about two years ago. The actress is known for her choices that have a good script and potential acting roles. Samantha in Family Man web series - iQlikmovies. There is a lot of buzz going on with the release of the espionage and action thriller, The Family Man. 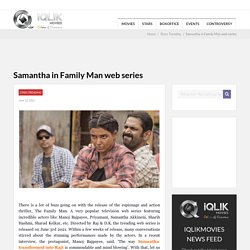 A very popular television web series featuring incredible actors like Manoj Bajpayee, Priyamani, Samantha Akkineni, Sharib Hashmi, Sharad Kelkar, etc. Directed by Raj & D.K. the trending web series is released on June 3rd 2021. Within a few weeks of release, many conversations stirred about the stunning performances made by thy actors. 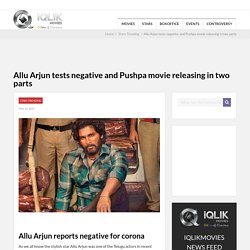 But Telugu Actor Allu Arjun took to social media toa announce that he has finally recovered from the corona virus. The actor expressed gratitude and wished well for everyone who was praying for his speedy recovery. Earlier on his birthday, the actor had written on his social media handle that he is thankful for his wishes, and was overwhelmed by the wishes for his recovery. He had also mentioned that he was taking the protocols strictly to get fir and test negative for covid 19. Keerthy suresh and Nithiin’s Range De gets OTT release date. Range De to be aired digitally from June 12th Following its release in theaters in March, the Tollywood romantic drama “Rang De” is preparing for OTT screening on Zee5. 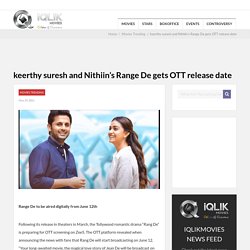 The OTT platform revealed when announcing the news with fans that Rang De will start broadcasting on June 12. “Your long-awaited movie, the magical love story of Jean De will be broadcast on #ZEE5 from June 12th”, Zee5. Announce on Twitter. The film is directed by the famous Tholiprema Venky Atluri, with actors Keerthy Suresh and Nithiin as the main characters. RAJAMOULI'S FATHER MAKES SHOCKING COMMENTS ON PURI JAGANNADH. Puri Jagannath is undoubtedly one of the most talented directors in Tollywood. 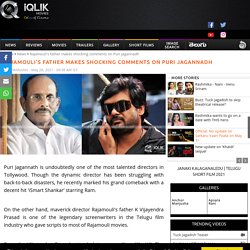 Though the dynamic director has been struggling with back-to-back disasters, he recently marked his grand comeback with a decent hit 'iSmart Shankar' starring Ram. On the other hand, maverick director Rajamouli's father K Vijayendra Prasad is one of the legendary screenwriters in the Telugu film industry who gave scripts to most of Rajamouli movies.

Sushanth Singh Rajput's case reaches Hyderabad! REGINA TURNS A RAW AGENT FOR HER NEXT TAMIL FLICK. Regina Cassandra chooses to be versatile in her script selection. 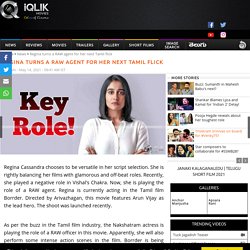 She is rightly balancing her films with glamorous and off-beat roles. Recently, she played a negative role in Vishal's Chakra. Now, she is playing the role of a RAW agent. Regina is currently acting in the Tamil film Borrder. Directed by Arivazhagan, this movie features Arun Vijay as the lead hero. As per the buzz in the Tamil film industry, the Nakshatram actress is playing the role of a RAW officer in this movie. 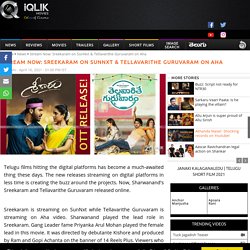 The new releases streaming on digital platforms in less time is creating the buzz around the projects. Now, Sharwanand's Sreekaram and Tellavarithe Guruvaram released online. ARANYA ACTOR TO GET MARRIED TO STAR BADMINTON PLAYER. ACHARYA LAGS BEHIND IN THE SHOOTING SCHEDULE. Megastar Chiranjeevi's Acharya is one of the most-anticipated releases of this year. There is a lot of buzz around this movie and it is slated for a worldwide release on May 13. However, the latest update suggests that there are 30 more days left for the shoot and the makers are hurrying the things to meet the release date deadline. According to the sources, there are 30 days left for the shoot. The makers are yet to can three songs of the film. COVID SCARE FOR ACHARYA?

He spent more than three years on this film and stated it is one of the few movies that are close to his heart. Story: Aranya is like the many other nature vs corporate firms-based films we have seen in the past. ARANYA Telugu MOVIE REVIEW. CHECK MOVIE REVIEW AND RATING. Movie: CheckProduction house: Bhavya CreationsWritten and Directed by Chandra Sekhar YeletiProduced by V. Ananda PrasadStarring: Nithiin, Rakul Preeth Singh, Priya Prakash Varrier, Simran Choudary and others.Director of Photography: Rahul ShrivatsavSound Design: Nagarjuna thalapalliMusic Director: Kalyani Malik Nithiin and Chandra Sekhar Yeleti teamed up with an exciting film titled Check. Yeleti is back with a new movie after a long time and there are a lot of expectations on this film.

TEAM RRR SHOOTING THE CLIMAX. Rakul Preet ignores social media. The talented Telugu actress Rakul Preet was summoned by the NCB related to drug case surrounding Rhea Chakraborty and others. Although at first keeping mum, then admitted that she was summoned. Earlier a week a go, Rakul Preet attended the questioning summoned by the NCB. Where she disclosed quiet a few sensational deatails about the consumption of drugs by Rhea and who bought and were linked with the production of them. After revealing and answering the questions for about 5 hours she was finally left. Rakul , has now returned back to Hyderabad from Mumbai after the summoning. At present a lot rides over the shoulders of Rakul Preet.

Solo Brathuke box office success post Covid 19. Solo Brathuke is the first box office success for Tollywood post Covid 19 With Covid 19 taking over the movie theatre business almost for the entire 2020, movie releases in theatres was very glim. Bollywood producers have not seen any ray hope to release any movie on the screens. But down south, the Telugu movie producers seemed to have mastered the bravery. Solo Brathuke Telugu movie have managed to break the ice, and stood out to be the first success. UNIQUE BACKSTORY BEHIND FIRST LOOK POSTER! Beautiful South actress Andreah Jeremiah is playing the lead role in the upcoming movie 'Picasu 2'. After Sesh, Mahesh Focuses On Naveen. Sarileru Neekevvaru becomes third most twitted hashtag on twitter 2020. Sarileru Neekevvaru has now a new feather to its cap.

Rakul Preet Singh is one of the talented beauties in South film i.