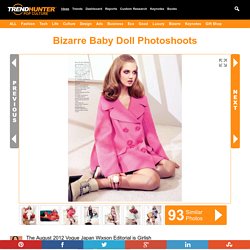 Wixson has been coveted for her unusual looks and humble beginnings, signing in 2009 to Los Angeles' Vision Models after her parents decided to take out a loan in the interest of her career. Wixson's collaborations with international brands Zac Posen and Rodarte have since taken off, bringing about her work alongside the headlining likes of Coco Rocha. She has yet again channeled her inner talent in this Vogue Japan photoshoot. Titled 'Working on Her Colors,' the styles displayed here are reminiscent of retro baby doll looks, seen by way of Giovanna Battaglia's capture of volumous curled locks, pastel-hued eye makeup and funky high heels. Dionne-Layout4.jpg (JPEG Image, 690 × 1021 pixels) - Scaled (98%) Dionne-Layout3-BW.jpg (JPEG Image, 690 × 1021 pixels) - Scaled (98%) IMG_1044.jpg (JPEG Image, 453 × 680 pixels) Wandering Star: Rose by Steven Popovich for Institute Magazine June 18, 2013 - Prafulla.net. 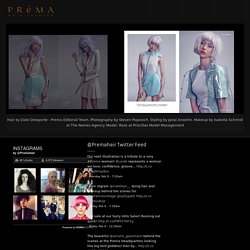 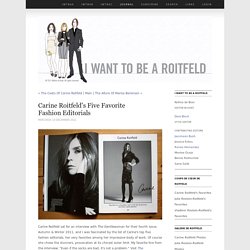 Carine Roitfeld: Festin - Journal - I Want To Be A Roitfeld. It seems that the editorial "Festin" (or in English, "feast") in the October issue of Vogue Paris has resulted in strong opinions. 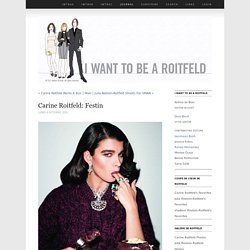 Mine is that only Carine Roitfeld could make food look so pornographic! Visit the photo gallery to see the entire editorial "Festin" featuring the beautiful Crystal Renn and a pile of meat which she eats with abandon. The photography is by Terry Richardson. What is your opinion of this editorial? Vogue Paris editorial images © 2010 Condé Nast. Gigi Hadid Fashion Shoot by Carine Roitfeld - Carine Roitfeld Haute Couture Shoot Harper's Bazaar. Miranda Kerr and Alessandra Ambrosio Go Calendar Girl For VMAN. Isabeli Fontana + Mais por Johnny Dufort [Editorial] 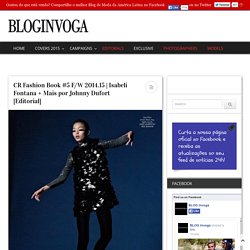 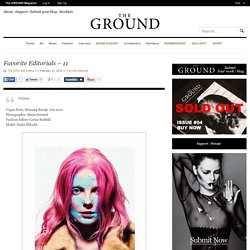 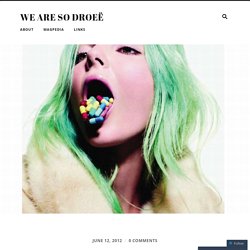 British Luxury Scarves with a playful punk twist. Today Ali launches a new monthly post THIS IS NOT STREET STYLE For this regular post I wanted to interview and draw people who wear Age of Reason. 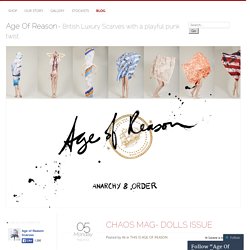 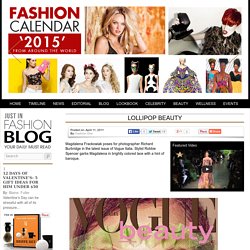 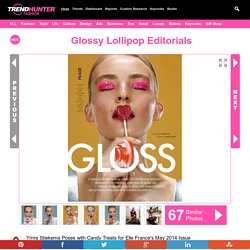 The editorial, called 'In the Mood,' was shot by talented photographer Emilio Tini. The shoot focused on hot makeup for the summer seasons with neon eyeshadow looks, dewy skin and glossy lips. Because the editorial focused on fresh makeup looks, Stiemkma was shot from the neck up. To complement the sweetness of the pinky peach hues in the beauty editorial, Stiemkma posed with several sugary lollipops. In several of the images, Stiemkma cheekily sucked on a lollipop, she used the lollipop stick as a faux cigarette or she showed off her color-stained tongue. My favorite summer makeup look starred Stiemkma with hot pink eyeshadow, glowing cheekbones, full brown eyebrows and a heart-shaped lollipop. Flickr - Partage de photos !

Wedding DIY: How To Make Giant Candy Lollipops! It’s no secret that me and Emily are big lovers of colours and fun themes & when we had such great feedback from our Dr Seuss inspiration board a few weeks ago we couldn’t resist following on with a DIY that would work perfectly with any colourful and crazy decor! These giant lollipops are really easy to make and would look amazing dotted around a room!

Fun would instantly be added! Ready to know how? Here we go… {How-to} Make Giant Lollipop Decorations. Since my daughter’s candy party (back in March) I’ve had lots of questions about the giant lollipops I made as decorations for the front walkway. The idea is not my own, I found many similar lollipops on several different sites as I was gathering ideas for my daughter’s party. This was one of the many crafts I prepared weeks in advance. They are not hard to make, and can be used to add color and whimsy indoors or out.

The pattern references Gucci’s iconic Flora print, but Knight updated the idea by painting botanicals that blossom at night, plants with strong roots for persistence and resistance in harsh environments. His work tiptoes the dichotomies of pretty and menace. The Gucci vibe’s a little like that, anyway. It’s a beautiful girl who knows when to be tough, floral prints paired with rock n’ roll leathers.

Photographed by Hong Jang Hyun, the editorial titled 'Birthday Girls' is a couture-themed birthday party gone a little bit naughty. Karina Givargisoff’s styling shows off the ladylike pastel frocks from Louis Vuitton’s Spring 2012 collection. The girls all wear colorful wigs with hair by Shon, and gorgeous luxe jewelry pieces by Cartier. Makeup artist Sally Branka added matching pastel lids and juicy pink lips for a sweet, added touch. Manicures by Dawn Sterling included metallic green and lemon yellow. The Pop Art Inspiration - Beauty Scene. Mickey Robot © Mark Andrew Allen Pop Art is one of the most popular visual art forms of the Modern Era. The movement started as a rebellion against the Abstract Expressionists, which were considered to be pretentious and over-intense. It was born in Britain in the mid 1950s and aims to emphasize the banal or kitschy elements of any given culture.

This art derives its style from the visual activities and pleasures of people by using bright colors, and reecognizable flat imagery influenced by comic books and newspaper photographs. “Pop Art looks out into the world. Iknowthatblog: Wake me up it's Monday! Mikael Wardhana Captures Candy Colored Fashion for Karen #13.