The Lord of the Rings fanfiction & fanart

┐(￣ヮ￣)┌ - Berbagai. Between C,M & Y,K (still in the mood of H/C? a Quick Bilbo n Thorin...) Larkspur Magic - littleblackdog - The Hobbit (2012), The Hobbit - All Media Types. “The Eagles of Manwë,” Gandalf had said, his tone that of a long-suffering tutor attempting to educate especially dim pupils. 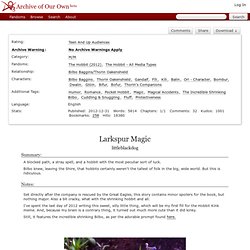 “Are neither ponies nor ferries, to be ridden neatly from one port to the next. Your convenience is not their concern, nor is your quest— is it not enough that they intervened to ensure our survival?” So i wait for you like a lonely house - stopchasingflowers - The Hobbit (2012) Bilbo Baggins came back home to Bag End in late March, thinner, richer and sadder than he left. 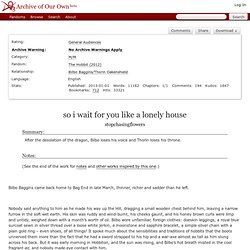 Kuriuiruzu - I Talk to the Rain Thorin Oakenshield/Bilbo... Where is Your Mind?, a hobbit fanfic. "Your mind is somewhere else, burglar. 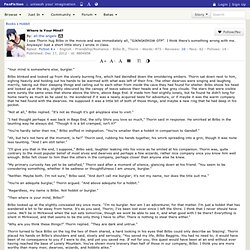 " Bilbo blinked and looked up from the slowly burning fire, which had dwindled down the smoldering embers. Thorin sat down next to him, sighing heavily and holding out his hands to be warmed with what was left of their fire. The other dwarves were singing and laughing merrily, taking out their sleeping things and calling out to each other from inside the cave they had found for shelter. Bilbo shook his head and looked up at the sky, slightly obscured by the canopy of leave sabove their heads and a few grey clouds.

The stars that were visible were surely the same ones that shone above the Shire, above Bags End. "Not at all," Bilbo replied. "I had thought perhaps it was back in Bags End, the silly Shire you love so much," Thorin said in response. Untitled. Of Mead, Rights, and Sleep - GallantGeekery - Multifandom. Bilbo was tired. 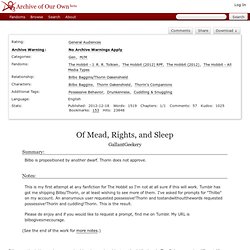 He was hungry and cold and scared and just so tired. His time in The Shire seemed a different life altogether. They had traveled so far, Thorin’s company, and already had a great deal of adventure behind them, yet Erebor still loomed in the distance. There was much yet to conquer before Bilbo had any chance of returning to his home. Once in his life he had settled in front of a warm fire with a cup of tea and a book for comfort. Serendipity - Awesomecake - The Hobbit (2012) They ate their breakfast on the rock spire where the eagles had left them, the mood merry despite the meagre rations. 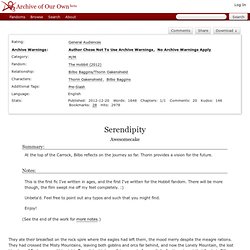 They had crossed the Misty Mountains, leaving both goblins and orcs far behind, and now the Lonely Mountain, the lost kingdom of Erebor, was within sight. True, it had taken a fair amount of serendipity for them to get that far, but, Bilbo pondered, all heroes in all stories always seemed to have some manner of luck on their side. Of Dwarves Courting Hobbits - GallantGeekery - Multifandom. Bilbo Baggins had noticed a difference in Thorin Oakenshield's behavior. 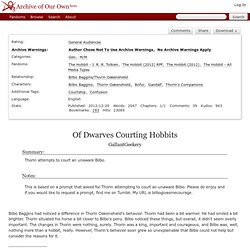 Thorin had been a bit warmer. He had smiled a bit brighter. Thorin situated his horse a bit closer to Bilbo's pony. Bilbo noticed these things, but overall, it didn't seem overly important. The changes in Thorin were nothing, surely. "Halfing," Thorin said gruffly from his spot by the fire. "Yes? " "I require assistance," Thorin grumbled, not bothering to look up.

Given in Good Faith - theskyeskye - The Hobbit (2012) He'd noticed immediately when things began to shift between them. 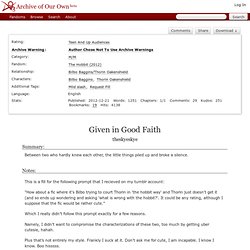 Thorin was not blind, nor was he the type to make a mountain out of a molehill... Well. Not always... All that shine as moonstone leave a discernible mark - kay_cricketed - The Hobbit - All Media Types, The Hobbit (2012) “Come,” said Gandalf. 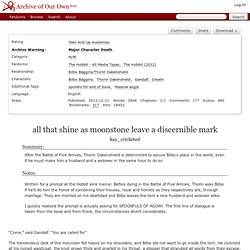 “You are called for.” The tremendous dark of the mountain fell heavy on his shoulders, and Bilbo did not want to go inside the tent. He clutched at his ruined waistcoat, the knot grown thick and gnarled in his throat, a stopper that strangled all words from their escape. In that moment, he felt small and terrible indeed. Though the battle was not initiated by his hand, and he believed his actions were those of a friend, Thorin’s harsh words of late remained sharp enough to draw blood even in memory. Gandalf looked on him and softened. “Is he very angry?” Twenty-nine White Horses - Jael (erynlasgalen1949) - Lord of the Rings - J. R. R. Tolkien. 'Thirty white horses on a red hill,First they champ,Then they stamp,Then . . .'JRR Tolkien, The Hobbit, Riddles in the Dark "Will someone kindly tell me what is going on here? 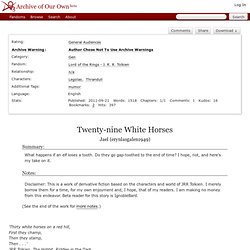 " Legolas winced at the unmistakable tone of anger in his father's voice; an anger that barely disguised the underlying fear. Oh perfect! Thranduil showing up was all he needed to cap off an utterly humiliating afternoon. However, he was too busy stifling a groan as Nestalinde's needle pierced the tender flesh of his upper lip to answer. "My Lord . . . "Yes, Magorion? " Leaf Subsides to Leaf - IgnobleBard - Lord of the Rings - Fandom. The feast ended, King Thranduil sat in his chambers with a half-empty wineglass in his hand. 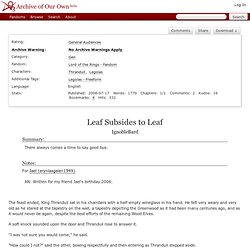 He felt very weary and very old as he stared at the tapestry on the wall, a tapestry depicting the Greenwood as it had been many centuries ago, and as it would never be again, despite the best efforts of the remaining Wood Elves. A soft knock sounded upon the door and Thranduil rose to answer it. "I was not sure you would come," he said. "How could I not?

" said the other, bowing respectfully and then entering as Thranduil stepped aside. "Indeed? Legolas smiled gently and Thranduil's heart broke, for it was this look he remembered so well, this look he would never see again. That Little Bit Of Took In Him - jossujb - The Hobbit - J. R. R. Tolkien. "My mother was a Took, you see", Bilbo tried to explain, but Thorin kept his questioning look. "Oh dearie me, that doesn't mean anything to you I suppose", Bilbo mumbled realizing he was quite out of words. Well, not exactly, as in a matter of fac,t he had a wide vocabulary for a simple hobbit. He was in a fortunate position, where his family had always had many books and he was encouraged to read and learn languages, even if hobbits in general didn't value stories about wars and dragons and adventures nearly as much Bilbo would have liked to. This is mind, Bilbo did have all means to say all things he wanted, but often found it impossible to organize his thoughts into sentences that made sense.

Especially when talking to dwarves. Where Dark Things Sleep - synchronized_strangers - The Hobbit (2012) Chapter Text. A Cure for Homesickness - ProcrastinatingPalindrome - The Hobbit (2012), The Hobbit - All Media Types. There were times when Bilbo would long for Bag End. The homesickness would often creep up when he least expected it, when he finally felt that he was adjusting to the adventuring life. A smell, a sound, a taste, something would remind him of home and that old ache would well up in his heart again, nagging and incessant. It was a nuisance more than anything else, the lingering memory of his comfy old bed, of the simple pleasure of reading a book in his favorite arm chair, of his pantry full of the best jams and cheeses (before the dwarves had demolished it, at any rate.)

Warrior cat names? Doodles of the Lowest Caliber. Courageous Acts - theskyeskye - The Hobbit (2012) Evenfall - melfice - The Hobbit (2012), The Hobbit - All Media Types, The Hobbit - J. R. R. Tolkien. There is wind through branches and foliage that sounds like a song he ceased listening to long ago, when the melody began to resemble a memory he couldn't forget. There is a chill in the rock and stone underneath his palms, under his legs and though leather and cloth, which feels like a distant home he can scarcely bear to remember. A heart beats in the chest of the body leaning into his side, lungs rising slowly with even breath, and if there is a luxury more foreign to him than the warmth against his side then he could not say what it might be.

There could be a hundred mornings and a hundred nights between here and there. There could be a thousand heavy footfalls from lowest field to highest peak, a thousand more than even that, and his journey would feel endless regardless; the length no longer matters. Courting Mr Baggins - Lothlorien - The Hobbit - All Media Types, The Hobbit (2012) Chapter Text Courting Mr Baggins Thorin found himself in an unfavourable position.

Having gone from thinking that bringing the hobbit along was a mistake to respecting Mr Baggins a great deal, he endeavoured to redeem himself in his eyes. I just I can’t I tried not to ship it but. God damn it Thorin you tsun. Sexually confused Thorin is my favourite Thorin.