OLinuXino A13 Mini PC Provides Open Source Computing For Less Than $60. Linux-Mac-Win - GHI Electronics. Our tagline, "where hardware meets software", has broad applications including systems that are limited by hardware access. 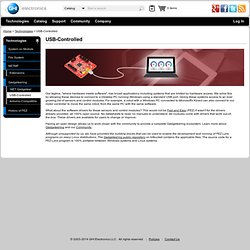 We solve this by allowing these devices to connect to a Desktop PC running Windows using a standard USB port. Giving these systems access to an ever growing list of sensors and control modules. For example, a robot with a Windows PC connected to Microsoft's Kinect can also connect to our motor controller to move the same robot, from the same PC with the same software. What about the software drivers for these sensors and control modules? This would not be Fast and Easy (FEZ) if wasn't for the drivers already provided, all 100% open source. Introducing the Intel® Galileo Development Board. Adapteva ships Kickstarted baby supercomputer boards. High performance access to file storage Upstart RISC processor and coprocessor designer Adapteva is shipping the first of its Parallella system boards, which its Epiphany multicore processors with ARM processors to create a spunky and reasonably peppy hybrid compute engine that doesn't cost much and is very energy efficient for certain kinds of processing. 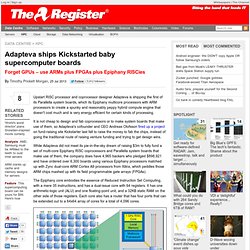 It is not cheap to design and fab coprocessors or to make system boards that make use of them, so Adapteva's cofounder and CEO Andreas Olofsson fired up a project on fund-raising site Kickstarter last fall to raise the money to fab the chips, instead of going the traditional route of raising venture funding and trying to get design wins. MAS 863.10 Andrew Payne. For this week's assignment I decided to revisit an older project, but approach it from a slightly different way now that I have more knowledge about custom circuits and output devices. 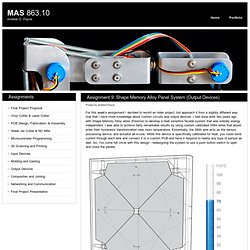 I had done work two years ago with Shape Memory Alloy wires (Flexinol) to develop a heat sensitive facade system that was entirely energy independent. I was able to achieve fairly remarkable results by using custom calibrated SMA wires that would enter their hysteresis transformation near room temperature. Essentially, the SMA wire acts as the sensor, processing device, and actuator all-in-one. While this device is specifically calibrated for heat, you could send current through each wire and connect it to a custom PCB and have it respond to nearly any type of sensor as well. Robotic 'Cubli' can balance on one corner. Swiss researchers have built a cube-shaped robot that can walk around and balance itself on one of its edges or corners. 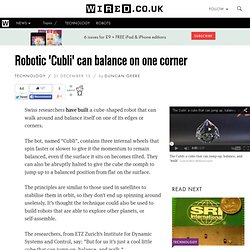 The bot, named "Cubli", contains three internal wheels that spin faster or slower to give it the momentum to remain balanced, even if the surface it sits on becomes tilted. They can also be abruptly halted to give the cube the oomph to jump up to a balanced position from flat on the surface. The principles are similar to those used in satellites to stabilise them in orbit, so they don't end up spinning around uselessly.

It's thought the technique could also be used to build robots that are able to explore other planets, or self-assemble. The researchers, from ETZ Zurich's Institute for Dynamic Systems and Control, say: "But for us it's just a cool little cube that can jump up, balance, and walk. " Android DIY Starter Kit. The Android DIY Starter Kit is for individual hackers looking for an open source development platform that provides access to customize both hardware and software. 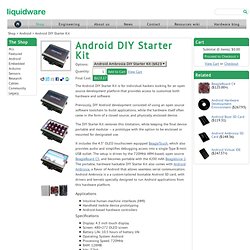 Previously, DIY Android development consisted of using an open source software toolchain to build applications, while the hardware itself often came in the form of a closed source, and physically enclosed device. New M-Block Mini Robots Can Self-Assemble, Jump And Climb. A new square mini robot has been created called the M-Block that is capable of self assembly, jumping and climbing. 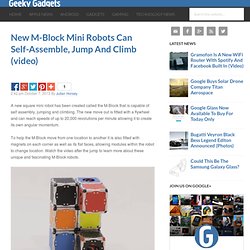 The new move out is fitted with a flywheel and can reach speeds of up to 20,000 revolutions per minute allowing it to create its own angular momentum. To help the M-Block move from one location to another it is also fitted with magnets on each corner as well as its flat faces, allowing modules within the robot to change location. Watch the video after the jump to learn more about these unique and fascinating M-Block robots.

The M-Block robots are cubes with no external moving parts and have been created by Roboticists at the Massachusetts Institute of Technology. Daniela Rus, a professor of electrical engineering and computer science and director of MIT’s Computer Science and Artificial Intelligence Laboratory (CSAIL) explains: Improv Modular Linux Mer Development Platform Unveiled. If you enjoy creating your own electronic projects you might be interested in a new modular development platform called the Improv which is a modular engineering kit that comes with a CPU card and a separate feature card to connect it to. 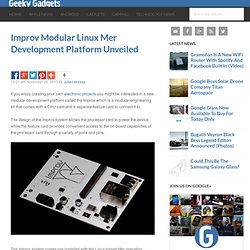 The design of the Improv system allows the processor card to power the device while the feature card provides convenient access to the on-board capabilities of the processor card through a variety of ports and pins. The Improv system comes pre-installed with the Linux-based Mer operating system and is powered by a ARM Cortex-A7 1Ghz dual core (Allwinner A20) supported by Mali400MP2 with OpenGL ES 2.0/1.1 and supported by 1GB of DDR2 RAM with 4GB NAND flash onboard.

“We chose Mer because it has been designed specifically for device development, has a thriving community of both companies and enthusiasts and has a proven open governance model directing development. You aren’t locked into this, however: you can install the operating system of your choice. BeagleBone Black Linux Mini PC Launches For $45. A new Linux mini PC has been launched this week in the form of the BeagleBone Black which has been created to provide users with an open-source Linux computer. 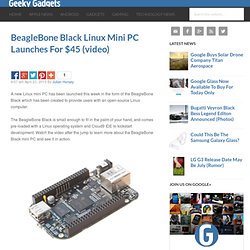 The BeagleBone Black is small enough to fit in the palm of your hand, and comes pre-loaded with a Linux operating system and Cloud9 IDE to kickstart development. Watch the video after the jump to learn more about the BeagleBone Black mini PC and see it in action. The BeagleBone Black is equipped with a 1GHz ARM Cortex-A8 processor, supported by 512MB of RAM,3D graphics accelerator, and a pair of PRU 32-bit RISC CPUs. Together with 2GB of onboard storage and a microSD slot for storage expansion if required. UDOO Mini PC Single Board Android, Linux, Arduino System Unveiled.

A new single board mini PC which is a cross between a Raspberry Pi and Arduino board, has been unveiled this week in the form of the new UDOO mini PC. 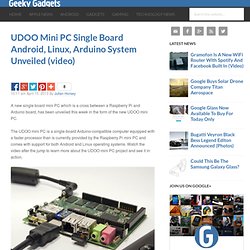 The UDOO mini PC is a single-board Arduino-compatible computer equipped with a faster processor than is currently provided by the Raspberry Pi mini PC and comes with support for both Android and Linux operating systems. Watch the video after the jump to learn more about the UDOO mini PC project and see it in action. The UDOO mini PC is powered by a Freescale i.MX6 ARM Cortex-A9 processor supported by 1GB of RAM, and is equipped with the same SAM3X8E ARM Cortex-M3 chip as the Arduino Due, and support for any shields that will work with the Arduino Due.

Other features of the new UDOO mini PC include a microSD card slot, Gigabit Ethernet and WiFi connectivity, 2 x USB ports, 2 x mini USB ports, 1 x HDMI, and audio ports. “UDOO is a mini PC that could run either Android or Linux, with an Arduino-compatible board embedded. Raspberry Pi And Beaglebone LOGi FPGA Development Board. Valent F(x) has launched a new Kickstarter crowd funding capping this month for its new LOGi FPGA Development Board built for the Raspberry Pi and Beaglebone Black. 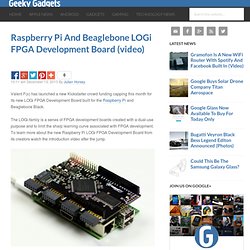 The LOGi-family is a series of FPGA development boards created with a dual-use purpose and to limit the sharp learning curve associated with FPGA development. To learn more about the new Raspberry Pi LOGi FPGA Development Board from its creators watch the introduction video after the jump. LOGi FPGA Development Board has also been built to enable the unification of existing hardware interfaces and open-source development platforms, such as the Raspberry Pi and Beaglebone Black. Valent F(x) explains a little more : FPGA development is an invaluable technology that allows a single board to morph in functionality to fit the needs of changing project environments.

The kit does not contain the Raspberry Pi Model B mini PC which is powered by a Broadcom BCM2835 system on a chip which features an ARM1176JZF-S 700MHZ processor. Together with onboard VideoCore IV GPU capable of High-Definition video playback supported by 512 megabytes of RAM. Source: Maker Shed. Raspberry Pi Monitor Offering 1280 x 800 Pixel Resolution Blast Past Pledge Goal. Some of our readers might remember the Raspberry Pi monitor we featured here on Geeky Gadgets at the beginning of the month. Offering Raspberry Pi mini PC owners a chance to help Kickstart a specifically designed Raspberry Pi monitor offering a 1280 x 800 pixel resolution. With still 8 days left to run on the Kickstarter campaign the team has managed to secure funding for £194,394 blasting past their original Kickstarter pledge goal of just £55,000.

Watch the video after the jump to learn more about the Raspberry Pi monitor project and see it in action. The new Raspberry Pi mini PC monitor has been created by Alex Eames who has partnered with Dave Mellor from Cyntech in a joint venture to create and manufacture the new HDMIPi Raspberry Pi monitor. The team explains: “To get these screens and modified HDMI controller boards for an acceptable price, we have to buy 1000 units or more. Raspberry Pi Touchscreen Monitor Unveiled By Adafruit For $35. If you are looking for a small form factor Raspberry Pi display you might be interested in a new device unveiled by Adafruit this month in the form of the PiTFT Raspberry Pi touchscreen monitor which measures just 2.8 inches in size sand costs just $35. The 2nd PCB model cubietruck discussion. It has been nearly a year since the Cubieteam launched the first open-source-hardware product named Cubieboard in Aug. 2012. The Cubieteam started with no product and no market penetration.

But as one of Cubieteam, I oversaw the move into a national innovation incubator park from a peasant house, then develop a product from hand soldering to machine mass production. It attracted numerous companies as distributors. Fairywren Transforms Your Raspberry Pi Into A Mini-ITX Motherboard. Insect-inspired flying robot handles collisions, goes where other robots can’t. Gimball is a flying robot that survives collisions. It weighs just 370g for 34cm in diameter. Seeed Studio Bazaar, Boost ideas, extend the reach. The Truth About Open Source Hardware Business Models. After some time now, the Open Hardware Ecosystem and Business sector gained some significant traction. Arduinode - Wireless sensor node (WSN) network protocol for arduino. Multi hop data routing with dynamic ID allocation.

Arduinode is a protocol for a wireless sensor net. Communication is handled in the background, neighbor nodes find each others and span the net. Some of its core features are: multi hop packet routing, dynamic id allocation, collision avoidance and rebroadcasting of lost messages. How I Built a Raspberry Pi Tablet. 360 view of my DIY PiPad Raspberry Pi tablet. It seems that every day a manufacturer comes out with a new tablet computer. Thinner, lighter, faster, but it seems that they all look about the same and accomplish roughly the same things. When I set out to build my Raspberry Pi tablet I wanted something different. I wanted an all-in-one system that was usable, portable, and Linux based. Additionally, it had to look good. My custom PiPad tablet. AirDroids Pocket Drone The World's Smallest Heavy Lift Micro-copter.

If you are looking for a compact yet powerful micro-copter you might be interested in the new AirDroids Pocket Drone which is launched a Kickstarter crowdfunding campaign this week to raise enough capital to make the jump from concept into production.